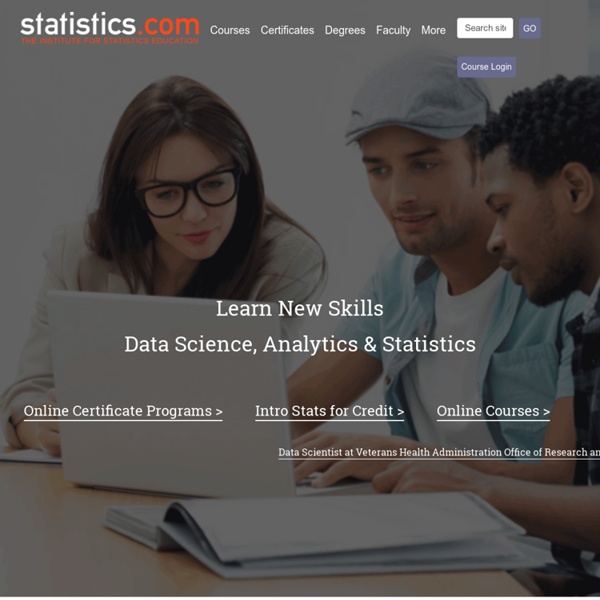 Free English Grammar Lessons and Tests Scrappy Marketing.com - Low Cost Marketing and Advertising Tools and Techniques For Small Business Marketers! Market and Advertise For Less!! Welcome - RB Whitaker's Wiki Virtual Laboratories in Probability and Statistics Welcome! Random (formerly Virtual Laboratories in Probability and Statistics) is a website devoted to probability, mathematical statistics, and stochastic processes, and is intended for teachers and students of these subjects. The site consists of an integrated set of components that includes expository text, interactive web apps, data sets, biographical sketches, and an object library. Please read the Introduction for more information about the content, structure, mathematical prerequisites, technologies, and organization of the project. Random is hosted at two sites: www.math.uah.edu/stat/ and www.randomservices.org/stat/. For updates, please follow @randomservices on Twitter. Technologies and Browser Requirements This site uses a number of advanced (but open and standard) technologies, including HTML5, CSS, and JavaScript. Display of mathematical notation is handled by the open source MathJax project. Support and Partnerships Rights and Permissions Quote

Data Mining, Statistical Analysis, Software and Services, Credit Scoring | StatSoft Etymologically Speaking... From the old Arabic word "hashshshin," which meant, "someone who is addicted to hash," that is, marijuana. Originally refered to a group of warriors who would smoke up before battle. Aaron White adds: You may want to explore the fact that the hashshshins were somewhat of a voodoo-ized grand conspiracy scapegoat cult (the very fact of their existence is impossible to confirm). They supposedly were a secret society (a la the FreeMasons) which was influential in every middle eastern court from Persia to Bangladesh. They were supposedly a brotherhood of assasins, devoted to their caballa and its secrecy, protected by an unlimited number of fanatical followers and unlimited material wealth. Paul Graham adds: The assassins were a sect of warriors who controlled a number of fortified towns in Persia for about 200 years. R.

How to Photograph Fireworks Displays Do you want to know how to photograph fireworks? With 4th July just days away I thought I’d refresh this article in which I give 10 Fireworks Photography tips to help you get started. Fireworks Displays are something that evoke a lot of emotion in people as they are not only beautiful and spectacular to watch but they also are often used to celebrate momentous occasions. I’ve had many emails from readers asking how to photograph fireworks displays, quite a few of whom have expressed concern that they might just be too hard to really photograph. My response is always the same – ‘give it a go – you might be surprised at what you end up with’. My reason for this advice is that back when I bought my first ever SLR (a film one) one of the first things I photographed was fireworks and I was amazed by how easy it was and how spectacular the results were. Of course it’s not just a matter of going out finding a fireworks display – there are, as usual, things you can do to improve your results. 1.

Breathingearth - CO2, birth & death rates by country, simulated real-time Susan Holmes- Stanford University Probabilty by Surprise Experimenting Paradoxes - Applets Visualizing Probabilities - Applets Beware, the current versions are very sensitive to which browsers you use, see the instructions. The Class Notes This contains all the class notes for the Introduction to Probability class currently taught at Stanford using these, and other web-resources. Acknowledgements This work was made possible by a grant from NSF-DUE and the support of Cornell University and the statistics department at Stanford. Chosen as a Selected Web Resource by the National Council of Teachers of Mathematics Illuminations Project.

Degrees of Freedom Degrees of Freedom Gerard E. Dallal, Ph.D. [Early draft subject to change.] One of the questions an instrutor dreads most from a mathematically unsophisticated audience is, "What exactly is degrees of freedom?" As an alternative to "the rank of a quadratic form", I've always enjoyed Jack Good's 1973 article in the American Statistician "What are Degrees of Freedom?" At the moment, I'm inclined to define degrees of freedom as a way of keeping score. A single sample: There are n observations. Two samples: There are n1+n2 observations. One-way ANOVA with g groups: There are n1+.. The primary null hypothesis being tested by one-way ANOVA is that the g population means are equal. There is another way of viewing the numerator degrees of freedom for the F ratio. Multiple regression with p predictors: There are n observations with p+1 parameters to be estimated--one regression coeffient for each of the predictors plus the intercept. Okay, so where's the quadratic form?

Wordorigins.org How to Start a Consulting Business - Entrepreneur.com Editor's note: This article was excerpted from our Consulting Business start-up guide, available from the Entrepreneur Bookstore. The dictionary defines a consultant as "an expert in a particular field who works as an advisor either to a company or to another individual." Sounds pretty vague, doesn't it? Businesses certainly understand what consultants are. Melinda P., an independent consultant in Arlington, Virginia, thinks more people are getting into the consulting field because technology has made it easier to do so. A consultant's job is to consult. But what separates a good consultant from a bad consultant is a passion and drive for excellence. You see, in this day and age, anyone can be a consultant. Or are you an expert in the fund-raising field? Things to Consider Before You Become a Consultant What certifications and special licensing will I need? Top 20 Consulting Businesses Thriving Today 1. 2. 3. 4. 5. 6. 7. 8. 9. 10. 11. 12. 13. 14. 15. 16. 17. 18. 19. 20. Target Market 1.