Harvard Referencing Generator. Selfridges logo. Teenagers spend 27 hours a week online: how internet use has ballooned in the last decade. Meanwhile, instant messaging use has leapt from 38pc of mobile phone users in 2013 to 42pc in 2014, driven by services such as WhatsApp and Facebook Messenger. 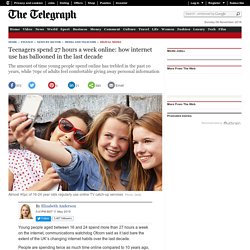 More people are also watching TV and films online. Birmingham City University - Sign In. Contactless card payment limit set to rise. Shoppers making contactless payments will be able to buy goods worth up to £30 with a touch of their card when the limit increases in September, it has been confirmed. 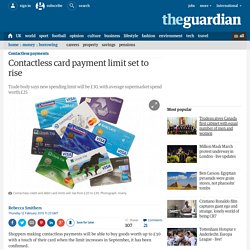 The UK Cards Association said raising the £20 limit would enable more consumers to simply tap and go. The average debit and credit card transaction in a supermarket is worth just over £25, the association said. No date for increasing the limit has yet been set. Contactless payment has grown rapidly as more people are reaching for their plastic when traditionally they might have used cash. Spending on contactless cards more than trebled in 2014 as more consumers and retailers embraced the technology, although the number of transactions suggested there is still a long way to go before this way of paying replaces cash or chip-and-pin.

Consumers across the UK made around 10 contactless payments every second, and the average transaction in December was worth £8.26. Childrens 2014 Report. Childrens 2014 Report. Company Info. Contactless card payment limit set to rise. Should You Market to Baby Boomers on Social Media? Businessinsider. Låpsley - Painter (Valentine) Official Video. Generation X Consumer Behavior. The definition of "Generation X" differs depending on which expert you ask. 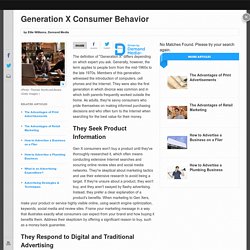 Generally, however, the term applies to people born from the mid-1960s to the late 1970s. Members of this generation witnessed the introduction of computers, cell phones and the Internet. They were also the first generation in which divorce was common and in which both parents frequently worked outside the home. As adults, they're savvy consumers who pride themselves on making informed purchasing decisions and who often turn to the Internet when searching for the best value for their money. They Seek Product Information Gen X consumers won't buy a product until they've thoroughly researched it, which often means conducting extensive Internet searches and scouring online review sites and social media networks. They Respond to Digital and Traditional Advertising Gen X consumers saw the development of computers and the Internet and are quite tech-savvy. 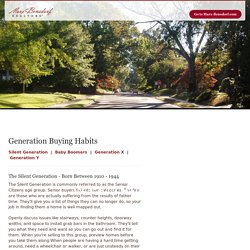 Senior buyers fall into two categories. The first are those who are actually suffering from the results of father time. Generation Buying Habits. Affirm. By Claire Murdough, Affirm Content Contributor. 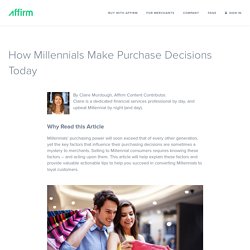 Claire is a dedicated financial services professional by day, and upbeat Millennial by night (and day). Why Read this Article Millennials’ purchasing power will soon exceed that of every other generation, yet the key factors that influence their purchasing decisions are sometimes a mystery to merchants. Selling to Millennial consumers requires knowing these factors – and acting upon them. This article will help explain these factors and provide valuable actionable tips to help you succeed in converting Millennials to loyal customers. The Millennial Consumer Boom. Affirm. Digital Formats Are Among the Most Trusted Advertising Sources Despite Slow Growth. Three factors form the foundation of a successful ad campaign: Reach, resonance and reaction. 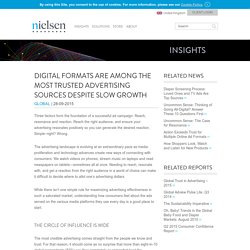 Savvy In-Store Solutions Drive Digital-Minded Consumers. If device-driven consumers turning to online shopping options give brick-and-mortar retailers cause for concern, they would do well to remember that e-commerce is only one part of the digital picture. 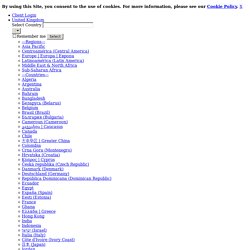 A complete digital strategy includes interaction at every point along the path to purchase, including finding stores, making lists, checking prices, researching products, sharing content and purchasing. These touch points occur both in and out of stores, and consumers are increasingly using technology to simplify and improve the process. In-store digital enablement options can bring the ease, convenience and personalization of online into brick-and-mortar stores. Bricks and Clicks: Global Grocery Shoppers Want a Blended Experience. When we connect to our favorite websites, apps and online entertainment services, we’re often immediately immersed in a convenient and unique experience tailored to our interests. 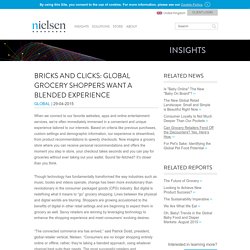 Based on criteria like previous purchases, custom settings and demographic information, our experience is streamlined, from product recommendations to speedy checkouts. Now imagine a grocery store where you can receive personal recommendations and offers the moment you step in store, your checkout takes seconds and you can pay for groceries without ever taking out your wallet. Sound far-fetched? Global recession timeline. 8 February 2007: HSBC WARNS OF SUBPRIME LOSSES HSBC reveals huge losses at its US mortgage arm Household Finance due to subprime losses, in one of the first signs that the US housing market is turning sour, and that it could have a knock-on effect on the global financial sector. 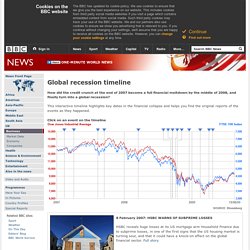 Full story 2 April 2007: NEW CENTURY GOES BUST New Century Financial, a leading subprime lender, files for bankruptcy. Has the recession changed consumer behaviour for good? - Banana Kick. Return to posts As we recover from the deepest recession since the Second World War will the consumer behaviour changes we have seen last or will we slowly return to pre-recession habits? 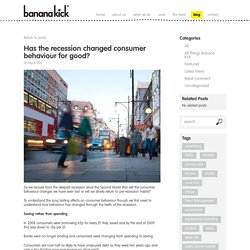 A whopping 43 % of parents associated it with the age, and mentioned that the childdisplays impulsive behavior for all sorts of products. Whereas 34% % mentioned that theimpulsive purchase happens only for confectionary. The analysis presented above leads us to an interesting discussion. IMPULSE BUYING BEHAVIOR AMONG YOUNG CHILDREN. Millennials Are Careful, Frugal Shoppers Who Buy for the Long-Term - Businessweek. Personalisation in marketing: how far should brands go? Effective marketing has always involved a careful balancing act.

It tends to require a targeted or a truly one-to-one approach whilst also avoiding the risk of being perceived as overly intrusive. This applies to online as much as offline activity. That said, a recent study by Yahoo finds that most consumers are not only aware of online personalisation but that they believe that it provides added relevance – with 78% of those surveyed expressing a desire for some type of personalised content. And, according to Piers North, strategy director at Yahoo UK, the greatest opportunity for marketers today lies in managing personalisation on mobile devices. Retail Think Tank - Has the recession and the rise of the Internet damaged customer service in UK retailing? - Customer service levels have rapidly declined over the last decade, says KPMG/Ipsos Think Tank - Urgent action is needed to restore consumer confidence and repair the health of the sector Part I: Executive Summary Introduction With the prolonged recession eroding consumer confidence, a combination of declining sales volumes and rising costs has seen most retailers reassess all facets of their business to try to save money and rescue falling profit margins.

Meanwhile the rise of multichannel retailing has brought with it significant customer service challenges, as well as additional costs. Children and Teens as Influencers - UK - May 2015. Marketing to Millennials? Make It Personal and Customized. The millennial generation in the United States is not only the largest population cohort it’s also the most racially diverse and highly educated generation in American history. 70% Of Consumers Want More Personalized Shopping Experiences. Who are the Millennial shoppers? And what do they really want?