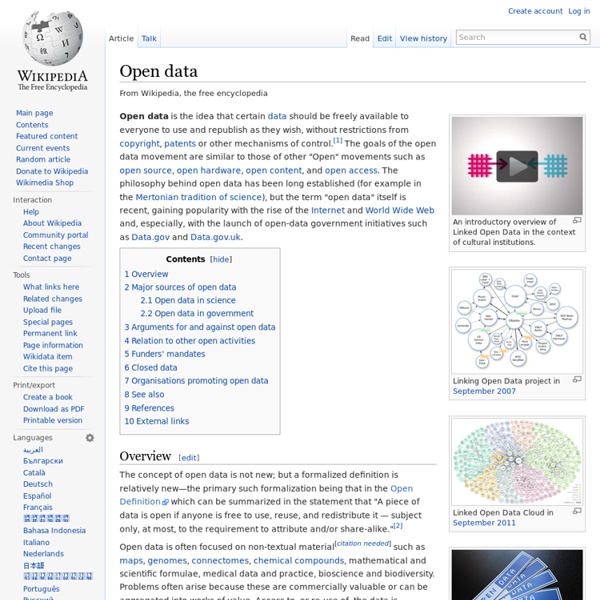 An introductory overview of Linked Open Data in the context of cultural institutions. Clear labeling of the licensing terms is a key component of Open data, and icons like the one pictured here are being used for that purpose. Overview[edit] The concept of open data is not new; but a formalized definition is relatively new—the primary such formalization being that in the Open Definition which can be summarized in the statement that "A piece of data is open if anyone is free to use, reuse, and redistribute it — subject only, at most, to the requirement to attribute and/or share-alike."[2] Open data is often focused on non-textual material[citation needed] such as maps, genomes, connectomes, chemical compounds, mathematical and scientific formulae, medical data and practice, bioscience and biodiversity. A typical depiction of the need for open data: Creators of data often do not consider the need to state the conditions of ownership, licensing and re-use. I want my data back. See also[edit]

SweoIG/TaskForces/CommunityProjects/LinkingOpenData - ESW Wiki News 2014-12-03: The 8th edition of the Linked Data on the Web workshop will take place at WWW2015 in Florence, Italy. The paper submission deadline for the workshop is 15 March, 2015. 2014-09-10: An updated version of the LOD Cloud diagram has been published. The new version contains 570 linked datasets which are connected by 2909 linksets. Social Engineering and Cybersecurity The image of the modern hacker is not an easy one to form. For a long time, people had this stereotype of the basement dwelling, antisocial, unscrupulous hacker, like Wayne Knight’s character Neuman in Jurassic Park. However, this is 2012, and today’s hackers learn young. Many are not old enough to drive or drink alcohol, but left to their own devices and given free reign over the internet, they can creat chaos. Today’s hackers work in groups, and often depend on elaborate online social support systems to learn new skills and adapt. They’re more than caricatures too.

Open science data Open science data is a type of open data focused on publishing observations and results of scientific activities available for anyone to analyze and reuse. While the idea of open science data has been actively promoted since the 1950s, the rise of the Internet has significantly lowered the cost and time required to publish or obtain data. History[edit] The concept of open access to scientific data was institutionally established with the formation of the World Data Center system, in preparation for the International Geophysical Year of 1957-1958.[1] The International Council of Scientific Unions (now the International Council for Science) established several World Data Centers to minimize the risk of data loss and to maximize data accessibility, further recommending in 1955 that data be made available in machine-readable form.[2] "The Earth's atmosphere, oceans, and biosphere form an integrated system that transcends national boundaries.

LinkedData - ESW Wiki LinkedData is to spreadsheets and databases what the Web of hypertext documents is to word processor files. Use URIs as names for things Use HTTP URIs so that people can look up those names. When someone looks up a URI, provide useful information. Include links to other URIs. so that they can discover more things groupage cargo service. The Year in Cybersecurity: Malware, Social Media and Web Exploits This was the year of malware. In particular, according to the latest Sophos annnual report on cybersecurity, the year that's coming to a close saw a resurgence of web malware, and 80% of attacks on the web came in the form or redirects from legitimate sites infiltrated with malicious code. At the same time, the report warns, cybersecurity is not just about the desktop computer or Windows anymore. The continuous rise of smartphones, tablets as well as social media has given ill-intended hackers new platforms to exploit.

Linked Data - Design Issues Up to Design Issues The Semantic Web isn't just about putting data on the web. It is about making links, so that a person or machine can explore the web of data. With linked data, when you have some of it, you can find other, related, data. Like the web of hypertext, the web of data is constructed with documents on the web. However, unlike the web of hypertext, where links are relationships anchors in hypertext documents written in HTML, for data they links between arbitrary things described by RDF,. As Bitcoin Soars in Value, Alternative Cryptocurrencies, Such as Litecoin and PPCoin, Also Climb In recent weeks, the digital currency Bitcoin has soared and then dipped in value, along the way attracting more public attention than ever before and speculation as to whether it could become an established and widely accepted way to pay for goods and services. But Bitcoin isn’t the only cryptocurrency out there. Several others are also surging in popularity and value, and they claim to offer technical improvements that make them better suited to mainstream use. Some of these competing currencies already represent significant stores of value. The value of a single bitcoin on the most popular exchange was $93.70 at time of publication, and the total value of all bitcoins in circulation just over $1 billion (it was over $2 billion at the market’s high point last week). The largest alternative cryptocurrency, litecoins, were worth $2.31 each and $38 million in total; the next largest, PPCoin, were worth $0.22 each adding up to a total value of $4 million.

OS OpenData - Ordnance Survey OS OpenData™ offers a wide range of digital map products which you can freely view or download, for use in both personal and commercial applications. Coverage Small scale - national Data use Backdrop Address and location Land and height Roads and logistics The Autism Advantage “He has made me think about this differently, that these individuals can be a part of our business and our plans,” says Ernie Dianastasis, a managing director of CAI, an information-technology company that has agreed to work with Specialisterne to find jobs for autistic software testers in the United States. For previously unemployable people — one recent study found that more than half of Americans with an autism diagnosis do not attend college or find jobs within two years of graduating from high school — Sonne’s idea holds out the possibility of self-sufficiency. He has received countless letters of thanks and encouragement from the families of autistic people. One woman in Hawaii wrote Sonne asking if she could move her family to Denmark so that her unemployed autistic son could join the Specialisterne team.

Where to Find Open Data on the Web Today, a story on Techmeme caught our eye. It was entitled "We Need a Wikipedia for data," and the article, written by X-Googler Bret Taylor, discussed the difficulty of finding open data sets on the internet, something which could spur innovation, allowing programmers to build new applications the likes of which have never been seen before. What was interesting about this story, in addition to, obviously, the concept of a Data Wiki itself, was the amazing and insightful commentary around this concept, not just on the blog, but all over the net, something which led to the discovery of some pretty good data sources that are already available. In Bret's story, he mentioned some of the common data sources currently available, like the US Census Bureau's map data and the Reuters corpus, but his commenters came up with a few more.