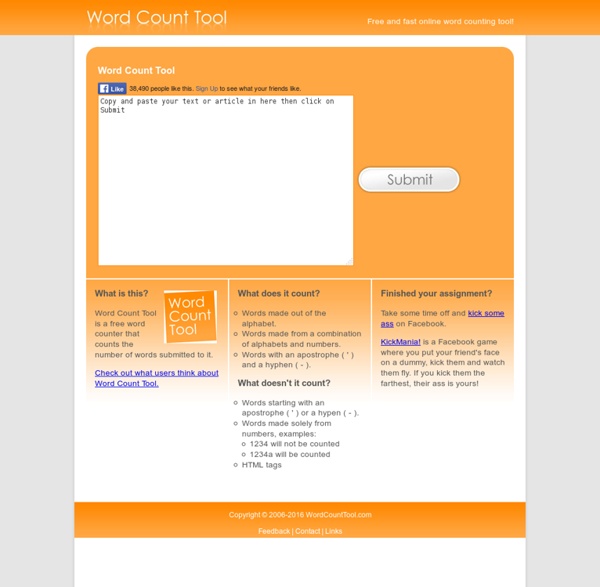 A Breathing Earth - CometBird Here's a view looking at one year of seasonal transformations on Earth. Made possible by the tremendous folks of the NASA Visible Earth team, I downloaded the twelve cloud-free satellite imagery mosaics of Earth ("Blue Marble Next Generation") at each month of the year. I wrapped them into some fun projections then stitched them together into a couple animated gifs... Don't click this small version or this tiny version. The 100 Most Important Things To Know About Your Character (revised) Quote from original Author(Beth):This list came about when, one day while struggling to develop a character for an upcoming Hunter game, my lovely roommate Nikki looked at me and said something like, "Wouldn't it be cool to have a list of questions you could go through and answer while you were making characters, so you'd make sure to consider all sorts of different elements in their personality?" I agreed, and that very evening we sat down over hot chocolate and ramen noodles to whip up a list of 100 appearance-, history-, and personality-related questions (which seemed like a nice even number) to answer as a relatively easy yet still in-depth character building exercise. Later on, we went through the list again, took out the questions that sucked (because there were a lot of them) and replaced them with better ones. What you see before you is the result of that second revision. Just don't email us specifically to tell us how much we suck. That only results in cranky gamerchicks.

Beauvoir, Simone de  Simone de Beauvoir was one of the most preeminent French existentialist philosophers and writers. Working alongside other famous existentialists such as Jean-Paul Sartre, Albert Camus and Maurice Merleau-Ponty, de Beauvoir produced a rich corpus of writings including works on ethics, feminism, fiction, autobiography, and politics. Beauvoir's method incorporated various political and ethical dimensions. In The Ethics of Ambiguity, she developed an existentialist ethics that condemned the “spirit of seriousness” in which people too readily identify with certain abstractions at the expense of individual freedom and responsibility. In The Second Sex, she produced an articulate attack on the fact that throughout history women have been relegated to a sphere of “immanence,” and the passive acceptance of roles assigned to them by society. In The Mandarins, she fictionalized the struggles of existents trapped in ambiguous social and personal relationships at the closing of World War II.

Western-backed resolution on Syria doomed? Published time: January 27, 2012 11:25 Edited time: January 28, 2012 08:39 The UN Security Council is due to consider a new resolution on Syria, which demands that the country’s authorities step down. Russia however has stated that the draft offered by the West and the Arab League has no chance of being passed as it is. ­"The UN Security Council will meet in closed consultations this Friday 3:00 pm in New York to discuss steps to take on the situation in Syria," France's UN mission Twitter page informed.

23 Websites that Make Your Writing Stronger We are all apprentices in a craft where no one ever becomes a master. ~Ernest Hemingway How strong is your writing? No matter how good you think it is, there’s always room for improvement. The Ethics of Ambiguity by Simone de Beauvoir I. Ambiguity and Freedom “Life in itself is neither good nor evil. It is the place of good and evil, according to what you make it.” MONTAIGNE. Free Chat Rooms My Account Not yet a Member? Meet 4 million+ friendly members 5000+ video chat rooms Free group video calls

English words that describe behaviour An A-Z of English words and phrases that describe behaviour. active = always doing something: "She's an active person and never wants to stay in." aggressive = being angry or threatening: "He's aggressive and starts arguments." ambitious = wanting to succeed: "He's ambitious and wants to lead the company." argumentative = always arguing with people: "He won't accept what you say – he's argumentative and loves to disagree!"