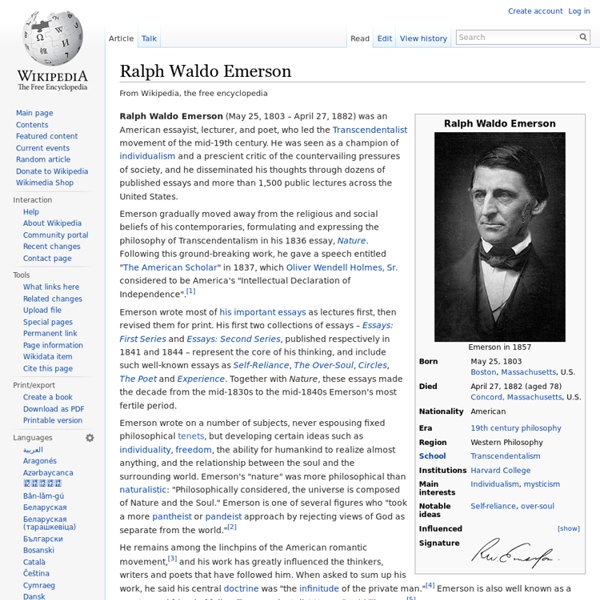 Ralph Waldo Emerson (May 25, 1803 – April 27, 1882) was an American essayist, lecturer, and poet, who led the Transcendentalist movement of the mid-19th century. He was seen as a champion of individualism and a prescient critic of the countervailing pressures of society, and he disseminated his thoughts through dozens of published essays and more than 1,500 public lectures across the United States. He remains among the linchpins of the American romantic movement,[3] and his work has greatly influenced the thinkers, writers and poets that have followed him. When asked to sum up his work, he said his central doctrine was "the infinitude of the private man Early life, family, and education[edit] Emerson was born in Boston, Massachusetts, on May 25, 1803,[6] son of Ruth Haskins and the Rev. In 1826, faced with poor health, Emerson went to seek out warmer climates. While in St. Early career[edit] Literary career and Transcendentalism[edit] Ralph Waldo Emerson in 1859 Related:  Montainge

21 - Essays - Ralph Waldo Emerson (1803-1882) More E-texts Essays by Ralph Waldo Emerson (1803-1882) Essays: 1 | 2 | 3 | 4 | 5 | 6 | 7 | 8 | 9 | 10 | 11 | 12 | 13 | 14 | 15 | 16 | 17 | 18 | 19 | 20 | 21 | Essay 21. A Lecture read before the Society in Amory Hall, on Sunday, 3 March, 1844 Whoever has had opportunity of acquaintance with society in New England, during the last twenty–five years, with those middle and with those leading sections that may constitute any just representation of the character and aim of the community, will have been struck with the great activity of thought and experimenting. With this din of opinion and debate, there was a keener scrutiny of institutions and domestic life than any we had known, there was sincere protesting against existing evils, and there were changes of employment dictated by conscience. There was in all the practical activities of New England, for the last quarter of a century, a gradual withdrawal of tender consciences from the social organizations.

English Civil War The English Civil War (1642–1651) was a series of armed conflicts and political machinations between Parliamentarians ("Roundheads") and Royalists ("Cavaliers") in the Kingdom of England over, principally, the manner of its government. The first (1642–46) and second (1648–49) wars pitted the supporters of King Charles I against the supporters of the Long Parliament, while the third (1649–51) saw fighting between supporters of King Charles II and supporters of the Rump Parliament. The war ended with the Parliamentarian victory at the Battle of Worcester on 3 September 1651. The overall outcome of the war was threefold: the trial and execution of Charles I; the exile of his son, Charles II; and the replacement of English monarchy with, at first, the Commonwealth of England (1649–53) and then the Protectorate (1653–59) under Oliver Cromwell's personal rule. Terminology[edit] Background[edit] The King's rule[edit] Charles I, painted by Van Dyck Personal rule[edit] Rebellion in Scotland[edit]

Apollo and Dionysus — American Symphony Orchestra Apollo and Dionysus By Leon Botstein Written for the concert Apollo and Dionysus, performed on May 9, 2010 at Avery Fisher Hall at Lincoln Center. It is difficult to imagine a history of Western art that does not begin with the legacy of the classical world. Burckhardt was a bit like Virgil with his thesis that the Italian Renaissance was the result of a rediscovery of classical heritage. For both of these thinkers, the transition from the Dark Ages to the Renaissance represented a decline in the dominance of ignorance, superstition, and the irrational, and the revival of reason. As an age which put itself at the apex of historical progress, the nineteenth century—once it had established the Renaissance as the beginning of modernity and the Enlightenment as its adolescence, as it were—developed its own version of the meaning of its classical inheritance, of this look backwards on behalf of the present. Nietzsche thought so.

William Hazlitt English writer We ask you, humbly, to help. Hi reader in Canada, it seems you use Wikipedia a lot; that's great! Maybe later Thank you! Close William Hazlitt (10 April 1778 – 18 September 1830) was an English writer, drama and literary critic, painter, social commentator, and philosopher. During his lifetime he befriended many people who are now part of the 19th-century literary canon, including Charles and Mary Lamb, Stendhal, Samuel Taylor Coleridge, William Wordsworth, and John Keats.[8] Contents Life and works[edit] Background[edit] Childhood, education, young philosopher (1778–1797)[edit] Childhood[edit] House in Wem, Shropshire where the Reverend William Hazlitt and his family lived between 1787 and 1813 William, the youngest of the surviving Hazlitt children, was born in Mitre Lane, Maidstone, in 1778. Education[edit] Hazlitt was educated at home and at a local school. Changes were taking place within the young Hazlitt as well. The young philosopher[edit] The itinerant painter[edit] In "Mr.

Ministry of Information (United Kingdom) Lord Beaverbrook (10 February 1918 – 4 November 1918)Lord Downham (4 November 1918 – 10 January 1919) Keep Calm and Carry On, a wartime poster from the MOI in 1939 which, although printed and distributed, was never posted. The Ministry of Information was formed on 4 September 1939, the day after Britain's declaration of war, and the first Minister was sworn in on 5 September 1939. The Ministry’s function was ‘To promote the national case to the public at home and abroad in time of war’ by issuing ‘National Propaganda’ and controlling news and information.[2] It was initially responsible for censorship, issuing official news, home publicity and overseas publicity in Allied and neutral countries. The Ministry was responsible for information policy and the output of propaganda material in Allied and neutral countries, with overseas publicity organised geographically. American and Empire Divisions continued throughout the war, other areas being covered by a succession of different divisions.

Time Person of the Year History[edit] The tradition of selecting a "Man of the Year" began in 1927, with Time editors contemplating news makers of the year. The idea was also an attempt to remedy the editorial embarrassment earlier that year of not having aviator Charles Lindbergh on its cover following his historic trans-Atlantic flight. By the end of the year, it was decided that a cover story featuring Lindbergh as the Man of the Year would serve both purposes.[2][volume & issue needed] Since then, individual people, classes of people, the computer ("Machine of the Year" in 1982), and "Endangered Earth" ("Planet of the Year" in 1988) have all been selected for the special year-end issue. Since the list began, every serving President of the United States has been a Person of the Year at least once with the exceptions of Calvin Coolidge, in office at time of the first issue, Herbert Hoover, the next U.S. president, and Gerald Ford. The last issue of 1989 named Mikhail Gorbachev as "Man of the Decade".

Friedrich Nietzsche German philosopher Friedrich Wilhelm Nietzsche (,[11][12] German: [ˈfʁiːdʁɪç ˈvɪlhɛlm ˈniːtʃə] ( listen) or [- ˈniːtsʃə];[13][14][15] 15 October 1844 – 25 August 1900) was a German philosopher, cultural critic, composer, poet, philologist, and Latin and Greek scholar whose work has exerted a profound influence on modern intellectual history.[16][17][18][19][20] He began his career as a classical philologist before turning to philosophy. After his death, his sister Elisabeth became the curator and editor of Nietzsche's manuscripts, reworking his unpublished writings to fit her own German nationalist ideology while often contradicting or obfuscating Nietzsche's stated opinions, which were explicitly opposed to antisemitism and nationalism. Life[edit] Youth (1844–1868)[edit] Born on 15 October 1844, Nietzsche grew up in the small town of Röcken (now part of Lützen), near Leipzig, in the Prussian Province of Saxony. In 1854, he began to attend Domgymnasium in Naumburg. Composer[edit]

Apollonian and Dionysian Terms representing a dichotomy/dialectic between rationality and emotion The Apollonian and Dionysian is a philosophical and literary concept and dichotomy/dialectic, based on Apollo and Dionysus in Greek mythology. Some Western philosophical and literary figures have invoked this dichotomy in critical and creative works, most notably Friedrich Nietzsche and later followers. In Greek mythology, Apollo and Dionysus are both sons of Zeus. Apollo is the god of the sun, of rational thinking and order, and appeals to logic, prudence and purity. Dionysus is the god of wine and dance, of irrationality and chaos, and appeals to emotions and instincts. Nietzsche's version[edit] Although the use of the concepts of the Apollonian and Dionysian is linked to Nietzsche's The Birth of Tragedy, the terms were used before him in German culture.[1] The poet Hölderlin spoke of them, while Winckelmann talked of Bacchus, the god of wine. Other viewpoints[edit] Post-modern reading[edit] Ruth Benedict[edit]

Albert O. Hirschman Albert Otto Hirschman[1] (born Otto-Albert Hirschmann; April 7, 1915 – December 10, 2012) was an influential economist and the author of several books on political economy and political ideology. His first major contribution was in the area of development economics.[2] Here he emphasized the need for unbalanced growth. Because developing countries are short of decision making skills, he argued that disequilibria should be encouraged to stimulate growth and help mobilize resources. Key to this was encouraging industries with a large number of linkages to other firms. His later work was in political economy and there he advanced two simple but intellectually powerful schemata. In World War II, he played a key role in rescuing refugees in occupied France. Life[edit] Soon thereafter, Hirschman volunteered to fight on behalf of the Spanish Republic in the Spanish Civil War. Hirschman helped develop the hiding hand principle in his 1967 essay 'The principle of the hiding hand'. Books[edit] 1945.