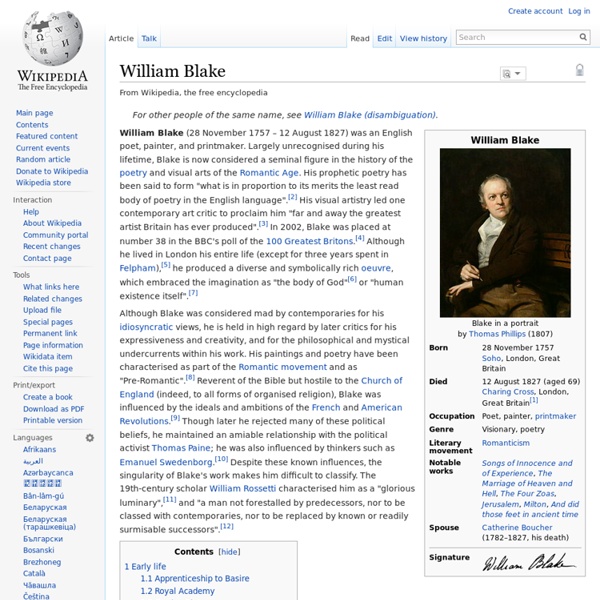 William Blake (28 November 1757 – 12 August 1827) was an English poet, painter, and printmaker. Largely unrecognised during his lifetime, Blake is now considered a seminal figure in the history of the poetry and visual arts of the Romantic Age. His prophetic poetry has been said to form "what is in proportion to its merits the least read body of poetry in the English language".[2] His visual artistry led one contemporary art critic to proclaim him "far and away the greatest artist Britain has ever produced".[3] In 2002, Blake was placed at number 38 in the BBC's poll of the 100 Greatest Britons.[4] Although he lived in London his entire life (except for three years spent in Felpham),[5] he produced a diverse and symbolically rich oeuvre, which embraced the imagination as "the body of God"[6] or "human existence itself".[7] Early life[edit] 28 Broad Street (now Broadwick Street) in an illustration of 1912. Blake was born here and lived here until he was 25. Apprenticeship to Basire[edit] Related:  The Cloud of Unknowing

Open Source Shakespeare: search Shakespeare's works, read the texts Francis of Assisi Italian Catholic saint, friar, deacon and preacher and founder of the Franciscan Order (1181/2–1226) Francis of Assisi (born Giovanni di Pietro di Bernardone; Italian: Francesco d'Assisi; Latin: Franciscus Assisiensis; 1181 or 1182 – 3 October 1226), venerated as Saint Francis of Assisi, also known in his ministry as Francesco, was an Italian Catholic friar, deacon, mystic, and preacher. He founded the men's Order of Friars Minor, the women's Order of St. Clare, the Third Order of St. Francis and the Custody of the Holy Land. Francis is one of the most venerated religious figures in Christianity. Pope Gregory IX canonized Francis on 16 July 1228. Biography[edit] Early life[edit] Indulged by his parents, Francis lived the high-spirited life typical of a wealthy young man.[8] As a youth, Francesco became a devotee of troubadours and was fascinated with all things Transalpine.[11] He was handsome, witty, gallant, and delighted in fine clothes. Founding of the Franciscan Orders[edit] A U.S.

The Seven Spiritual Laws of Success by Deepak Chopra | Laws Of Vibrational Energy The Seven Spiritual Laws of Success by Deepak Chopra The Law of Pure Potentiality Take time to be silent, to just BE. Meditate for 30 minutes twice a day. Silently witness the intelligence within every living thing. Practice non-judgment. The Law of Giving and Receiving Today bring whoever you encounter a gift: a compliment or flower. The Law of Karma Every action generates a force of energy that returns to us in like kind. The Law of Least Effort Accept people, situations, and events as they occur. The Law of Intention and Desire Inherent in every intention and desire is the mechanics for its fulfillment. The Law of Detachment Allow yourself and others the freedom to be who they are. The Law of Dharma Seek your higher Self. I use the seven laws and it has change my life. Download This Now This information was taken from

'A Modest Proposal', Jonathan Swift It is a melancholy object to those who walk through this great town or travel in the country, when they see the streets, the roads, and cabin doors, crowded with beggars of the female sex, followed by three, four, or six children, all in rags and importuning every passenger for an alms. These mothers, instead of being able to work for their honest livelihood, are forced to employ all their time in strolling to beg sustenance for their helpless infants: who as they grow up either turn thieves for want of work, or leave their dear native country to fight for the Pretender in Spain, or sell themselves to the Barbadoes. But my intention is very far from being confined to provide only for the children of professed beggars; it is of a much greater extent, and shall take in the whole number of infants at a certain age who are born of parents in effect as little able to support them as those who demand our charity in the streets. Many other advantages might be enumerated.

Geoffrey Chaucer - Books, Poems & Facts English poet Geoffrey Chaucer wrote the unfinished work, The Canterbury Tales. It is considered one of the greatest poetic works in English. Synopsis Poet Geoffrey Chaucer was born circa 1340 in London, England. Early Life Poet Geoffrey Chaucer was born circa 1340, most likely at his parents’ house on Thames Street in London, England. Geoffrey Chaucer is believed to have attended the St. In 1357, Chaucer became a public servant to Countess Elizabeth of Ulster, the Duke of Clarence’s wife, for which he was paid a small stipend—enough to pay for his food and clothing. In 1366, Chaucer married Philippa Roet, the daughter of Sir Payne Roet, and the marriage conveniently helped further Chaucer’s career in the English court. Public Service By 1368, King Edward III had made Chaucer one of his esquires. In 1377 and 1388, Chaucer engaged in yet more diplomatic missions, with the objectives of finding a French wife for Richard II and securing military aid in Italy. Major Works Later Life Death

UNIVERSAL SPIRITUAL LAWS "George Eliot" by Virginia Woolf George Eliot was the pseudonym of novelist, translator, and religious writer Mary Ann Evans (1819-1880). This article by Virginia Woolf was first published in The Times Literary Supplement, 20th November, 1919. To read George Eliot attentively is to become aware how little one knows about her. It is also to become aware of the credulity, not very creditable to one's insight, with which, half consciously and partly maliciously, one had accepted the late Victorian version of a deluded woman who held phantom sway over subjects even more deluded than herself. Indeed, one cannot escape the conviction that the long, heavy face with its expression of serious and sullen and almost equine power has stamped itself depressingly upon the minds of people who remember George Eliot, so that it looks out upon them from her pages. Lady Ritchie, with equal skill, has left a more intimate indoor portrait: A scrap of her talk is preserved. The first volume of her life is a singularly depressing record.

Related:
Related:  The Cloud of Unknowing