City and Town Name Generator for RPGs and Writers 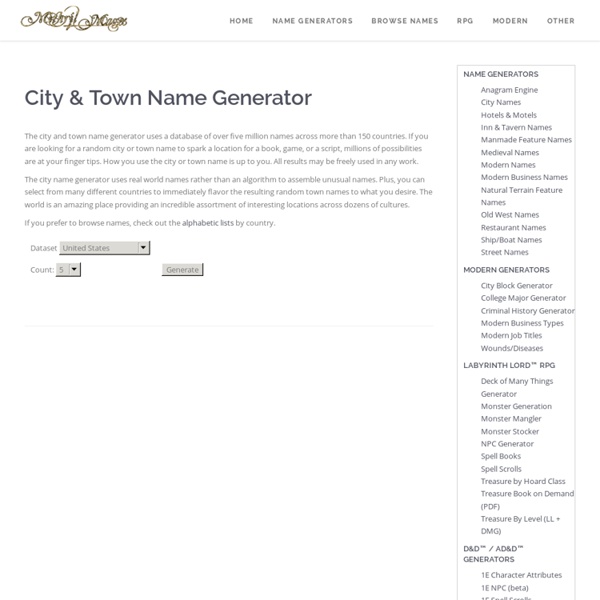 City Generator Fantasy Name Generator By Samuel Stoddard - Version 1.5 One of the perks of creating fantasy stories -- whether by writing a story or game or by role-playing -- is you get to make up the names. Some people relish the task while others are frustrated by it. In addition, this tool can be fairly amusing to use even if you don't have any name creating to do. You can use the fantasy name generator below.

Fantasy Name Generator Jump down to the Generator This fantasy name generator will generate truely random fantasy names, there are millions of different combinations of names you can generate. This generator is great for generating fantasy character names for use in a book you're writing. This generator is advanced, in the way you can sort your generated names, you may have noticed that there are two spaces below the fantasy name generator, one called: "Fantasy Names Generated" and the other called "Favourite Names". Pelawyth Fantasy Names Generated: Favorite Names: Click on the names you like the best. Pelawyth Copy your names before you leave.

List of the Virtues Sponsored Ad (What is This?)You are here:Index Character Improvement Click on a Virtue for some inspiring quotes about it. Each Virtue page also includes it's definition, it's etymology/the origin of it's meaning and positive suggestions about it. Are you interested in healing your character? You are here:Index VirtueScienceFollow On Serendipity Famous Writers' Small Writing Sheds and Off-the-Grid Huts Previous image Next image Roald Dahl's writing hut, The Gipsy House When I hear the phrase "writing hut" or "backyard shed" my imagination practically squeals with delight. Roald Dahl "The whole of the inside was organised as a place for writing: so the old wing-back chair had part of the back burrowed out to make it more comfortable; he had a sleeping bag that he put his legs in when it was cold and a footstool to rest them on; he had a very characteristic Roald arrangement for a writing table with a bar across the arms of the chair and a cardboard tube that altered the angle of the board on which he wrote. Mark Twain "It is the loveliest study you ever saw...octagonal with a peaked roof, each face filled with a spacious window...perched in complete isolation on the top of an elevation that commands leagues of valley and city and retreating ranges of distant blue hills. George Bernard Shaw Dylan Thomas "Dylan Thomas’s writing shed began its life back in the 1920s. Henry David Thoreau