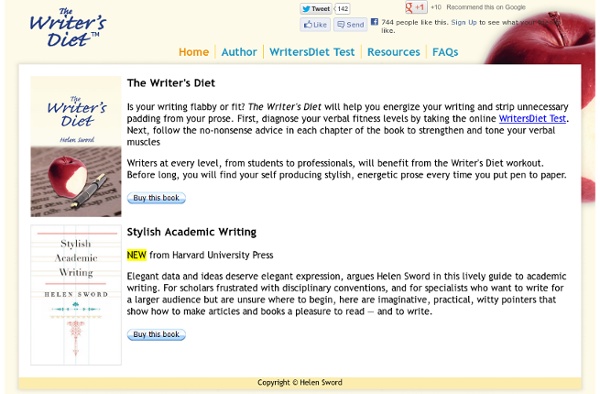 Online tools and apps that will help you revise your writing Hiring an editor is an important step in publishing a book-length manuscript. But for smaller projects — short stories, essays, academic assignments —it’s not always possible to get a professional editor to check your grammar and structure before submitting. But you can still bring your writing skills to perfection when you access the right tools. These tools can help you learn a thing or two about how you write and how you can improve your style, but they will also add some fun to the concept of writing: 1. I Write Like Are you wondering how much your work is influenced by a famous writer? You can enter any text in English to play around with this tool. 2. Have you ever paid attention to Ernest Hemingway’s style? When you see a sentence highlighted in yellow, you are advised to split it or shorten it to make it clearer. 3. Your writing should be just as you want your girlfriends/boyfriends to be – fit and lean. 4. So you think that 1000 words are enough to elaborate a topic? 5.

Laptop policies: Getting beyond 'yes or no' This Blog Linked From Here Links for philosophy teachers Tuesday, March 6, 2012 Laptop policies: Getting beyond 'yes or no' Tomorrow's Prof blog has a nice post summarizing some recent research about student use of laptops (and like devices) in the classroom. an interactive suite of web-based tools designed to allow questioning practices in lecture that actively engage students and go beyond the multiple choice format typically supported by classroom response systems (clickers). Sounds cool, to say the least.But what caught my eye were some suggestions that go beyond thinking about student laptop use as a yes/no question. function best when they fulfill a clear instructional goal and when they are used in specific ways that support student learning. Posted by Michael Cholbi at 6:46 PM Email ThisBlogThis! Labels: Michael Cholbi's posts, Technology and Pedagogy 4 comments: Jan Priddy, OregonMarch 7, 2012 at 6:31 AMLectureTools allows student to pose questions anonymously? Load more...

Writing communities and networking strategies in the Digital Age When you first started composing your masterpiece, you probably thought the biggest hurdle was actually getting it done. By now, you’ve learned there are many more challenges than just the writing process. You need to find an editor, a publisher, a peer review group. And, you need to engage in some serious marketing – of yourself and your book. With each new task you face, you probably feel there is no possible way to make it all happen. That’s why you are probably freaking out right now. Why do I need to worry about digital networking?! Trust me. There are five reasons why digital networking will enhance your writing and your career: You’ll meet people you wouldn’t normally connect with. Tips for networking online with traditional social media Now that I’ve convinced you it’s a good idea to add one more thing to your to-do list, you’ll want to know how to get started. First, start with traditional social media networks – Facebook, Twitter, Google+ and LinkedIn. Book in a week Writertopia

APSA Important Writing Lessons From First-Time Novelists KIRA PEIKOFF (kirapeikoff.com) is the author of the acclaimed thriller Living Proof (Tor Books). She holds a bachelor’s degree in journalism from New York University and is a candidate for a Master of Science in bioethics at Columbia. She has written for The Daily News, Newsday, The Orange County Register and New York magazine. For several years, she worked in the editorial departments of two major publishing houses; currently she teaches writing and is at work on her second novel. Here’s something most published pros know well: In this business, there are no absolutes. The journey to bookstores seems to be a lot like that old snowflake cliché—No two are alike. And no one illustrates this fact better than debut novelists. —by Zachary Petit, former senior managing editor of Writer’s Digest Consider Lissa Price, Melinda Leigh, Carter Wilson, Kira Peikoff and Eyre Price: One pursued publication for 30 years. They ran the gauntlet and emerged on the other side with a book in their hands. E. L.

Writing Fiction: How to Structure a Killer Novel Ending There are more than a few writers and teachers out there, many of them orders of magnitude more famous than I am (not hard to do), who don’t like to compartmentalize or even attempt to define the sequential parts and essential milestones of a story’s plot structure. Too formulaic, they say. Takes the fun and creativity out of it, they claim. A write-by-the-numbers strategy for hacks, a vocal few plead. When they do talk about how to write a book and, more specifically, story structure, they tend to dress it up with descriptions that are less engineering-speak in nature—“the hero’s journey” … “the inciting incident” … “the turn”—and are more appropriate to a lit class at Oxford. Makes them sound—or more accurately, feel—more writerly. What’s interesting is that the stories these writers create, especially if they’re published, and especially the stories they use as examples in their teaching, follow pretty much the same structural paradigm. Thank God for screenwriters.

How to Write a Musical: 8 Steps Edit Article Edited by Viral, Jack Herrick, Maluniu, Teresa and 9 others Do you think you're the next Stephen Sondheim or Rodgers and Hammerstein? If that answer's yes then this is the 'How to...' for you! Ad Steps 1Get your storyline. Tips Have fun. Screenwriting: How To Write a Musical Sequence - Steve's Digicams In screenwriting, musical sequences in films often randomly show up in places throughout the script. And, sometimes these sequences have very little to do with what is going on in the film. Unlike standard scripts, the dialogue through the rest of the film usually has nothing to do with the musical number. Step 1: Understanding Types of Musicals Musicals can be broken down into four types: all-sung, operas, integrated and un-integrated. The integrated musical format makes the singing part of the dialogue and sometimes part of the plot. Further, the musical numbers do not actually advance the plot. Step 2: Adding Musical Numbers to Scripts As mentioned previously, musical numbers can be randomly inserted throughout the plot. A screenwriter is not going to be the one writing the music and lyrics for the musical number. For example: Oh, what a glorious day. JULIE, MARIA and JENNIFER walk up holding each other and then embrace WILMA. Step 3: Modern Day Musicals