7 Big Reasons You Need Your Own Book 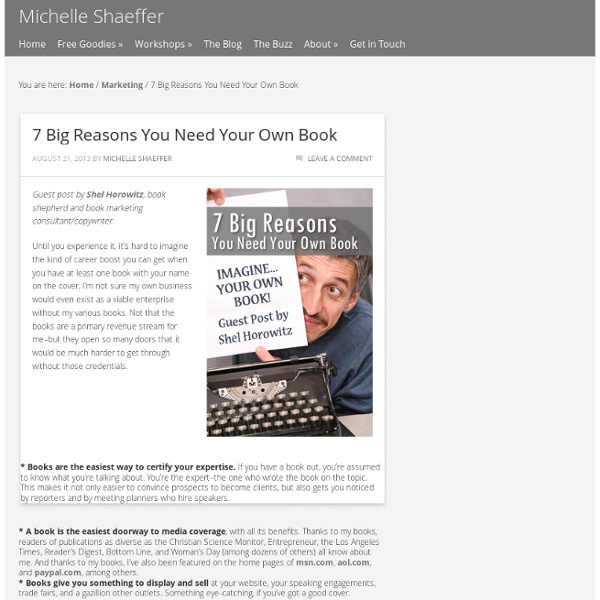 Free Software for Writers Dozens of software applications are available and marketed to writers, yet many of these programs can be both expensive and difficult to use. While standard word processors serve the needs of many writers, some writers require more adaptable and agile solutions. For writers unwilling or unable to spend hundreds of dollars to invest in the multitude of purchasable programs, there is a plethora of free, user-friendly programs available for download. Q10 is a free, highly customizable, full screen word processor. This program includes live stats, word count, auto-correction, auto-save, timer alarm for timed writing sessions, and optional typewriter sound effects. For writers who are easily distracted or crave a simple, effective word processor with no frills, Q10 is extremely simple to use. yWriter yWriter is a word processor alternative that allows users to organize their projects in a completely new way. Celtx OpenOffice OpenOffice is an open source alternative to Microsoft Office. Sonar

Greek Mythology Dreamcast - Sam Claflin as Icarus 6 Ways to Create Riveting Conflict in Your Story Who says conflict is a bad thing? Who says world peace is the most important goal of humanity? Who says arguing with your little brother when you’re a kid means you’ll grow up to be an ill-mannered ruffian? Not a writer, that’s for sure! Arguably, the single most important tenet of fiction can be summed up in the saw “no conflict, no story.” You can break every rule in the book (pun intended) and still have a whopper of a tale—so long as you remember to throw a dash of conflict in your story. The simple fact is: fiction has its very basis in conflict. So how does one go about manufacturing this most precious of story ingredients? 1. This is the easiest (and, often, the best) way to throw a little conflict in your story. 2. Many stories base their entire premise on this idea (think of the Pevensie siblings tumbling through the wardrobe into Narnia in C.S. 3. 4. 5. 6. Stories are about balance. Tell me your opinion: What is the chief source of conflict in your story?

icarus 10 Lessons I Learned While Writing My First Novel Within the last week, I’ve completed the final round of revisions on my first novel and started querying agents. Woo! Huzzah! Happy dances all around. It’s been a long road… I started this novel about four-and-a-half years ago. Here are the top ten lessons I learned while writing my first novel: 1. And that means everything. Art simply doesn’t play nicely with timelines. 2. You know what I’m talking about, right? Not the kind where it sparks and then deflates seconds later. 3. This simple question got me over every hump of writers block while writing my novel. 4. Yes, your plot needs to make sense. 5. I thought getting through my rough draft meant the hard part was over. But, somewhere, eventually, edits start getting easier again… and that’s called the light at the end of tunnel. 6. It’s just impossible to be an artist and view your own creation with an unbiased perspective. 7. Receiving critique can sting a little. 8. 9. It’s impossible. 10. Completing your manuscript is a huge feat.

Scene-Creation Workshop — Writing Scenes that Move Your Story Forward As the atom is the smallest discrete unit of matter, so the scene is the smallest discrete unit in fiction; it is the smallest bit of fiction that contains the essential elements of story. You don’t build a story or a book of words and sentences and paragraphs — you build it of scenes, one piled on top of the next, each changing something that came before, all of them moving the story inexorably and relentlessly forward. You can, of course, break the scene up into its component pieces — words, sentences, and paragraphs — but only the scene contains the vital wholeness that makes it, like an atom of gold, a building block of your fiction. It contains the single element that gives your story life, movement, and excitement. Without this one element, you don’t have a scene, you merely have a vignette. So what is this magical element that gives your scene its life and makes it the brick with which you build your fiction? Change. When is a scene a scene? Okay. Now it’s your turn. Okay. Back?

Writer's Café fiction writing software - novels - screenwriting - short stories - creative fun 7 ways writing by hand can save your brain It's time to put pen to paper. Our tech-dependent society has put keyboards at the tips of our fingers at all times, from our smartphones to our laptops. But when was the last time you wrote by hand? Science shows that handwriting can benefit our minds in a number of ways. We spoke to Dr. Marc Seifer, a graphologist and handwriting expert who wrote The Definitive Book of Handwriting Analysis in 2008. 1. Writing a calming sentence is a form of graphotherapy, Seifer says. "This actually calms the person down and retrains the brain," Seifer says. 2. Writing something in cursive, that beautiful archaic form, can coordinate the left brain and right brain. 3. For young children, writing by hand is an imperative tool in improving cognitive skills. 4. Taking pen to paper inspires more creative thought, because it is a slower process than just typing something on a keyboard, Seifer says. 5. Writing by hand is a great tool for baby boomers who want to keep their minds sharp as they get older. 6. 7.