Geoffrey Chaucer. Geoffrey Chaucer (/ˈtʃɔːsər/; c. 1343 – 25 October 1400), known as the Father of English literature, is widely considered the greatest English poet of the Middle Ages and was the first poet to have been buried in Poet's Corner of Westminster Abbey. 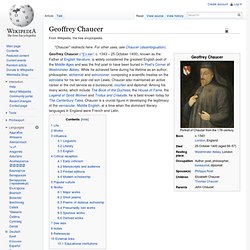 While he achieved fame during his lifetime as an author, philosopher, alchemist and astronomer, composing a scientific treatise on the astrolabe for his ten year-old son Lewis, Chaucer also maintained an active career in the civil service as a bureaucrat, courtier and diplomat. Among his many works, which include The Book of the Duchess, the House of Fame, the Legend of Good Women and Troilus and Criseyde, he is best known today for The Canterbury Tales. Chaucer is a crucial figure in developing the legitimacy of the vernacular, Middle English, at a time when the dominant literary languages in England were French and Latin. The Canterbury Tales.

After a long list of works written earlier in his career, including Troilus and Criseyde, House of Fame, and "Parliament of Fowls", The Canterbury Tales is near-unanimously seen as Chaucer's magnum opus. 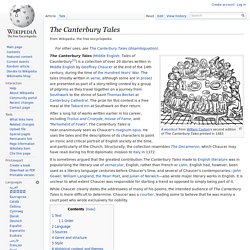 He uses the tales and the descriptions of its characters to paint an ironic and critical portrait of English society at the time, and particularly of the Church. Structurally, the collection resembles The Decameron, which Chaucer may have read during his first diplomatic mission to Italy in 1372. It is sometimes argued that the greatest contribution The Canterbury Tales made to English literature was in popularising the literary use of vernacular, English, rather than French or Latin. English had, however, been used as a literary language centuries before Chaucer's time, and several of Chaucer's contemporaries—John Gower, William Langland, the Pearl Poet, and Julian of Norwich—also wrote major literary works in English. 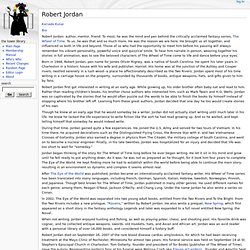 George R.R. Martin Likes "Game Of Thrones" Fans To Be Afraid. How George RR Martin does it. He does suffer from niche writing, as does every author in their chosen genre. 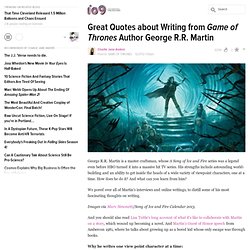 You think of the magic first and then mold a story around it. He even admitted he hates outlining. It couldn't hurt to get him back into it. The fact that you dislike him doesn't make him a bad writer. There's a lot of writers I won't ever read again because I cannot appreciate their style, that doesn't make them bad. I would agree for the most part. Things GRRM does well: - On an academic level, I think he understands the use of storytelling perspective as well as anyone out there, and his "viewpoint character" style in ASOIAF is remarkably efficient at giving us a full view of events without resorting to cheap narrative cheats. - As you say, "he's good at world building".

Things that bother me with GRRM: - As much as I love the detail, it can be a friggin' chore to read his stuff. . - Is it just me, or has the ASOIAF series just kind of stalled? I know, Twilight is so much better. 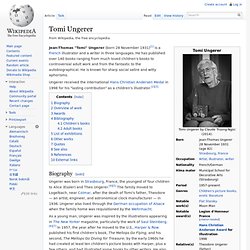 He has published over 140 books ranging from much loved children's books to controversial adult work and from the fantastic to the autobiographical. He is known for sharp social satire and witty aphorisms. Ungerer received the international Hans Christian Andersen Medal in 1998 for his "lasting contribution" as a children's illustrator.[2][3] Biography[edit] Ungerer was born in Strasbourg, France, the youngest of four children to Alice (Essler) and Theo Ungerer.[4][5] The family moved to Logelbach, near Colmar, after the death of Tomi's father, Theodore — an artist, engineer, and astronomical clock manufacturer — in 1936.

Maurice Sendak called Moon Man (1966) "easily one of the best picture books in recent years In 2007, his home town dedicated a museum to him, the Musée Tomi Ungerer/Centre international de l’illustration.[8] Overview of work[edit] Awards[edit] Bibliography[edit] John Shelton Reed. John Shelton Reed (born 1942) is a sociologist and essayist, author or editor of nineteen books, most of them dealing with the contemporary American South. 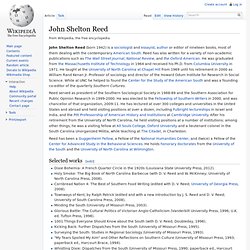 Reed has also written for a variety of non-academic publications such as The Wall Street Journal, National Review, and the Oxford American. He was graduated from the Massachusetts Institute of Technology in 1964 and received his Ph.D. from Columbia University in 1971. He taught at the University of North Carolina at Chapel Hill from 1969 until his retirement in 2000 as William Rand Kenan Jr. Professor of sociology and director of the Howard Odum Institute for Research in Social Science. While at UNC he helped to found the Center for the Study of the American South and was a founding co-editor of the quarterly Southern Cultures. Reed served as president of the Southern Sociological Society in 1988-89 and the Southern Association for Public Opinion Research in 1999-2000.