Susan Sontag on the Creative Purpose of Boredom 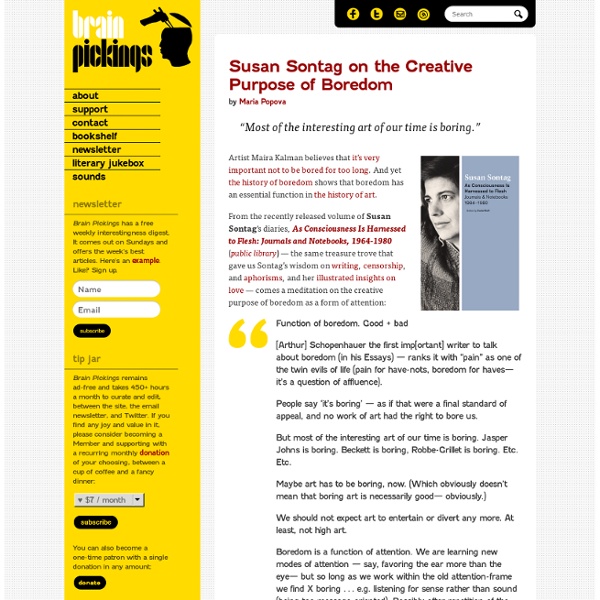 Kurt Vonnegut: You're Allowed To Be In Love Three Times In Your Life by Maria Popova An existential quota held in three long fingers. It’s a fertile season for unprecedented glimpses of Kurt Vonnegut’s character, thanks to the newly published anthology of his letters, which has given us such treats as the author’s uncompromising daily routine and his playful, romantic poetry. But in the introduction to the recently released We Are What We Pretend To Be: The First and Last Works (public library) — a slim volume containing Basic Training, Vonnegut’s first-ever novella only published after his death, and If God Were Alive Today, his last unfinished novel — the author’s youngest biological daughter, Nanette Vonnegut, shares a piece of the author’s life-credo that feels at once more personal and more relatable than the vast body of what has been written by and about Vonnegut in his lifetime. Most times I’d find my father in a very receptive mood to my prying questions, like ‘How many times have you been in love?’ Donating = Loving Share on Tumblr

Raymond Carver Raymond Clevie Carver, Jr. (May 25, 1938 – August 2, 1988) was an American short story writer and poet. Carver was a major writer of the late 20th century and a major force in the revitalization of the American short story in literature in the 1980s.[citation needed] Early life[edit] Carver was born in Clatskanie, Oregon, a mill town on the Columbia River, and grew up in Yakima, Washington.[1] His father, a skilled sawmill worker from Arkansas, was a fisherman and a heavy drinker. Writing career[edit] Carver continued his studies first at Chico State University and then at Humboldt State College in Arcata, California, where he studied with Richard Cortez Day and received his B.A. in 1963. In the mid-1960s Carver and his family lived in Sacramento, California, where he briefly worked at a bookstore before taking a position as a night custodian at Mercy Hospital. His first short story collection, Will You Please Be Quiet, Please? Personal life and death[edit] Decline of first marriage[edit]

Raymond Carver’s OKCupid Profile, Edited by Gordon Lish. My self-summary I am a writer and poet, one, bear with me here, of the “major” writers of the late 20th century, though just typing that felt desperate. I received a B.A. in English at Humboldt State University, then went on to attend the esteemed Iowa Writers’ Workshop, thus launching my career. I also like to drink. What I’m doing with my life Working on some short stories but honestly not that into it, which may be why I’m entertaining the prospect of dating again. I’m really good atI hate to kick a dead horse here, but I’m really good at writing. The first thing people usually notice about me I look the way a depressed person looks, if one were not trying to look that way. Favorite books, movies, shows, music, and foodThe Trial; The Sun Also Rises; For Whom The Bell Tolls; The Stranger; Dear Mr. The six things I could never do without Hendrick’s gin; tonic; lime; ice cubes; a tumbler; my typewriter. The most private thing I am willing to admit I’ve been cruel to others for material.

Susan Sontag on Beauty vs. Interestingness by Maria Popova Defying consumerism and the banality of the beautiful, or why our capacity for astonishment endures. “Attitudes toward beauty are entwined with our deepest conflicts surrounding flesh and spirit,” Harvard’s Nancy Etcoff wrote in her fantastic meditation on the psychology of beauty. The essay was in part inspired by Pope John Paul II’s response to the news of countless cover-ups of sexual abuse in the Catholic Church: He summoned the American cardinals to the Vatican and attempted to rationalize the situation by stating that “a great work of art may be blemished, but its beauty remains; and this is a truth which any intellectually honest critic will recognize.” Sontag writes: However much art may seem to be a matter of surface and reception by the senses, it has generally been accorded an honorary citizenship in the domain of “inner” (as opposed to “outer”) beauty. The subtraction of beauty as a standard for art hardly signals a decline of the authority of beauty.

Gordon Lish Gordon Jay Lish (born 1934 in Hewlett, New York) is an American writer.[1] As a literary editor, he championed many American authors, particularly Raymond Carver, Barry Hannah, Amy Hempel, Rick Bass, and Richard Ford. Early life and family[edit] Lish was raised in Hewlett, New York on Long Island; his father was a partner in Lish Brothers, a millinery firm. After Carruth advised him to attend college, Lish matriculated at the University of Arizona, mainly because the climate ameliorated his psoriasis. Following Lish's college graduation, the family moved to San Francisco; here Lish experienced the last vestiges of the San Francisco Renaissance and completed a teaching credential at San Francisco State University in 1960. Editing[edit] Genesis West[edit] In 1960, the Lish family moved to Burlingame, California, where they founded the avant-garde literary magazine Genesis West, which ran between 1961 and 1965. Esquire[edit] Alfred A. Dear Mr. Carver edits[edit] Legacy[edit]