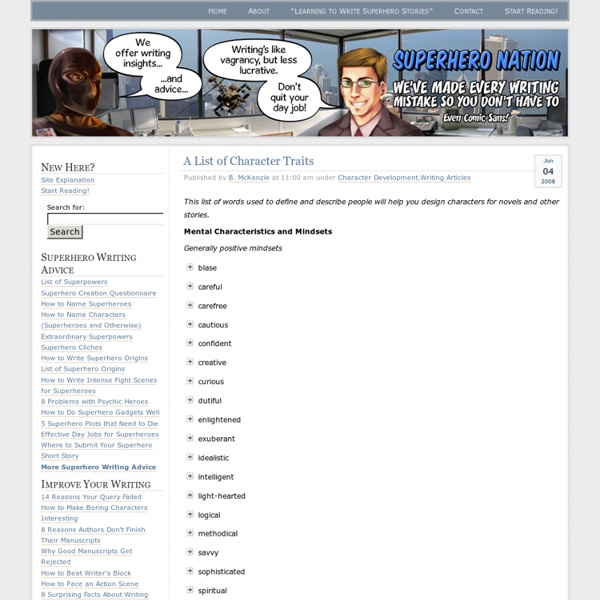 Medieval Names - List of Medieval Names Writers' Workshop | Characterisation How to write convincing characters Characterisation - the task of building characters - isn't easy. But if you're struggling to build characters with real life and vigour, just follow these rules. Know what kind of character you are writing There are roughly two types of protagonist in fiction. The second type of character (rather less common, in fact) is the genuinely extraordinary character who would make things happen in an empty room. Either type of character is fine - don't struggle to equip your ordinary character with a whole lot of amazing skills, or try to 'humanise' your James Bond character by making him nice to old ladies and interested in baking. Empathy is about story and good writing Likewise, don't worry too much if your character is likeable. A) you write well enough that your reader is drawn in to your protagonist's world, whether they like it or not; and B) the story you're writing forces that character to encounter big risks and mounting jeopardy. Checking your work

How to Create Good Personalities for Your Characters Edit Article Sample Character DescriptionsCreating Personalities for Your Own Characters Edited by Secretive, Julia Maureen, Flickety, Ben Rubenstein and 19 others You're on a plane to a distant country to visit some weird old relatives you are somehow related to. In your hands, you hold a book that your friend recommended. But wait...as you begin to read you realize that the characters are really boring! Ad Steps Sample Character Descriptions Creating Personalities for Your Own Characters 1Start with a simple profile including these categories: Name, Age, Gender, and Occupation. 6Continue developing characters until your story is finished. Tips Keep the characters true to themselves. Warnings Don't copy off other characters in different, already well known books, such as Harry Potter.

Character Chart FAVORITES Color: Music: Food: Literature: Expressions: Book: Quote: Expletive(s) (swears): Mode of transportation: HABITS Smokes: What? How often? Drinks: What? SELF-PERCEPTION One word character would use to describe self: One paragraph description of how character would describe self: What does character consider best physical characteristic? Immediate goal(s): Long range goal(s): How does character plan to accomplish goal(s)? How character react in a crisis (calm/panic/etc.)? Jewelry? Owns a computer? © (c ) copyright 1990-2011 Rebecca Sinclair ALL RIGHTS RESERVED Authors Note: I worked hard on this. ~ Permission is granted to LINK TO the Fiction Writers Character Chart. ~ Permission is granted to print out a copy of the Fiction Writers Character Chart FOR PERSONAL USE ~ Permission is NOT granted to copy and/or use the Character Chart in print and/or electronic form (including the internet) without express written permission)

25 Things You Should Know About Character - StumbleUpon Previous iterations of the “25 Things” series: 25 Things Every Writer Should Know 25 Things You Should Know About Storytelling And now… Here you’ll find the many things I believe — at this moment! 1. Without character, you have nothing. 2. A great character can be the line between narrative life and story death. 3. Don’t believe that all those other aspects are separate from the character. 4. The audience will do anything to spend time with a great character. 5. It is critical to know what a character wants from the start. 6. It doesn’t matter if we “like” your character, or in the parlance of junior high whether we even “like-like” your character. 7. It is critical to smack the audience in the crotchal region with an undeniable reason to give a fuck. 8. You must prove this thesis: “This character is worth the audience’s time.” 9. Don’t let the character be a dingleberry stuck to the ass of a toad as he floats downriver on a bumpy log. 10. 11. 12. 13. The law of threes. 15. 16. 17. 18.

Unique Plots Creating Stunning Character Arcs, Pt. 1: Can You Structure Characters? What if there were a sure-fire secret to creating stunning character arcs? Would you be interested in discovering it? If you care about connecting with readers, grabbing hold of their emotions, and creating stories that will resonate with them on a level deeper than mere entertainment, then the answer has to be a resounding yes! But here’s the thing about character arcs: they’re way too easy to take for granted. On the surface, character arcs seem to boil down to nothing more than a simple three-step process: 1. 2. 3. That’s character arc in a nutshell. Turns out: a lot. (Featured in the Structuring Your Novel Workbook.) The Link Between Character Arcs and Story Structure Too often, character and plot are viewed as separate entities—to the point that we often pit them against each other, trying to determine which is more important. We often think of plot as being about structure, but our notions of character and character arc tend toward the more airy-fairy. Surely, right? Wrong, actually.

Questionnaires for Writing Character Profiles - Creative Writing Help Enter your e-mail to get the e-book for FREE. We'll also keep you informed about interesting website news. "I have searched the web and used different worksheets, but none have come close to your worksheets and descriptions of (what to do and what not to do). Both courses I have taken have with Creative Writing Now have been amazing. "As usual - I already love the course on Irresistible Fiction, rewriting a lot and improving greatly even after the first lesson. “Essentials of Fiction proved that I could indeed write and I wrote every day, much to my boyfriend's dismay (waa sniff).” - Jill Gardner "I am loving the course and the peer interaction on the blog is fantastic!!!" "I'm enjoying the weekly email course, Essentials of Poetry Writing. "Thank you for all the material in this course. "I was pleasantly surprised at the quality of the lessons and feel they were very helpful in introducing new ideas and perspectives to my writing. "Thanks very much for this course. "Thank you so much!!

6 Key Things to Consider When Developing Characters By Jody Hedlund, @JodyHedlund I have to admit, I don’t write (or often read) character driven stories. My books are full of action and drama and are primarily plot-driven. In fact, I'm currently in the pre-planning stage for a couple different books. I find this time of getting to know my characters one of the most delightful aspects of the entire writing process. I thought I'd share a few of the things I consider when I'm developing my characters in the pre-writing stage. 1. Obviously I consider their physical appearance. But I always go much deeper than physical appearance. 2. Not only do I try to understand their skills, abilities, and talents, but I also attempt to determine their personality type (are they dominant, passive, loyal, outgoing, etc.). 3. I may not need to know when they had their first scraped knee or lost tooth. 4. I try to narrow down the qualities that will help my readers care about the characters. 5. 6. What about you?