Become a Better Writer with These Important Reading Skills First 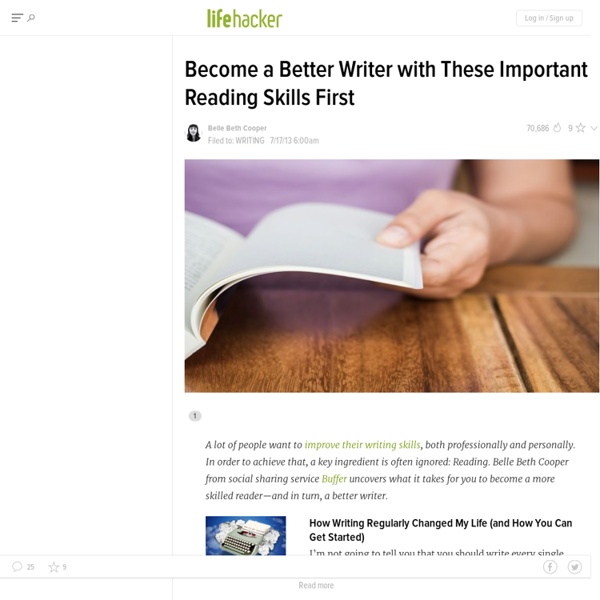 A Breathing Earth - CometBird Here's a view looking at one year of seasonal transformations on Earth. Made possible by the tremendous folks of the NASA Visible Earth team, I downloaded the twelve cloud-free satellite imagery mosaics of Earth ("Blue Marble Next Generation") at each month of the year. I wrapped them into some fun projections then stitched them together into a couple animated gifs... Don't click this small version or this tiny version. Click here to see the irrationally large version (8.9 MB). Don't waste your time with this boring small version or this lame tiny version. I of course had some expectation of what I would see as a result of animating these frames. Why? Of course there are the global characteristics of climate and the nature of land to heat and cool more rapidly than water. But, overall, to me it looks like breathing.

Finding your voice - making your writing sound like YOU Finding your voice by Christopher Meeks Developing a voice in your writing is a notion that passes over me every now and then like the "thung" sound of an error message on my computer. "I should develop a voice," I think. To some people, the image of "voice" may be akin to a rotund person belting something out in Italian in front of a lot of penguin-suited people paying big bucks waiting for the crystal to shatter. Or, if that metaphor's a bit too extreme, think of "voice" as simply like your own voice. A voice on the Web: Strive to create a "text" voice that is as distinctive as your speaking voice.We can't all be Hemingway: Don't try to write like someone else; find your own voice and don't try to change your demeanor.Write like you talk: It really can be that simple.Let your passion be your guide: Follow the urge; follow the idea.Let me entertain you: All writing, even the most serious, is a form of entertainment. I can recognize voice in other people's work. How do we do that? Boom.

25 Things You Should Know About Word Choice 1. A Series Of Word Choices Here’s why this matters: because both writing and storytelling comprise, at the most basic level, a series of word choices. Words are the building blocks of what we do. 2. Words are like LEGO bricks: the more we add, the more we define the reality of our playset. 3. You know that game — “Oh, you’re cold, colder, colder — oh! 4. Think of it like a different game, perhaps: you’re trying to say as much as possible with as few words as you can muster. 5. Finding the perfect word is as likely as finding a downy-soft unicorn with a pearlescent horn riding a skateboard made from the bones of your many enemies. 6. For every right word, you have an infinity of wrong ones. 7. You might use a word that either oversteps or fails to meet the idea you hope to present. 8. Remember how I said earlier that words are like LEGO, blah blah blah help define reality yadda yadda poop noise? 9. Incorrect word choice means you’re using the wrong damn word. 10. 11. 12. 13. 14. Am. 15.

Oak Outliner Is Simple and Powerful Online Outliner Intuit® | Website Building Software & Website Design Questionnaires for Writing Character Profiles Enter your e-mail to get the e-book for FREE. We'll also keep you informed about interesting website news. "I have searched the web and used different worksheets, but none have come close to your worksheets and descriptions of (what to do and what not to do). Both courses I have taken have with Creative Writing Now have been amazing. "As usual - I already love the course on Irresistible Fiction, rewriting a lot and improving greatly even after the first lesson. “Essentials of Fiction proved that I could indeed write and I wrote every day, much to my boyfriend's dismay (waa sniff).” - Jill Gardner "I am loving the course and the peer interaction on the blog is fantastic!!!" "I'm enjoying the weekly email course, Essentials of Poetry Writing. "Thank you for all the material in this course. "I was pleasantly surprised at the quality of the lessons and feel they were very helpful in introducing new ideas and perspectives to my writing. "Thanks very much for this course. "Thank you so much!!

Writer’s Digest - Writing Prompts Write a scene that includes a character speaking a different language, speaking in a thick accent, or otherwise speaking in a way that is unintelligibe to the other characters. (Note: You don't necessarily need to know the language the character is speaking—be creative with it!) Describe a character's reaction to something without explaining what it is. See if your fellow prompt responders can guess what it is. Write a story or a scene about one character playing a prank on another. Describe the scene from both characters' points of view. Writing Prompt: Write a story that involves confusion over homonyms (words that have the same spelling but different meanings) or homophones (words that sound the same but are spelled differently). For World Storytelling Day, share the best story you've ever heard or told by word of mouth, or have a fictional character recount their favorite story. You're making your way down a cobbled street when a stocky, red-bearded man beckons you into an alley.

How to Sync iTunes Across All Your Computers with Dropbox @Madrilenyo: iTunes gets really picky about this stuff. While I'm not 100% sure it won't work, if the path is even slightly different between Macs it'll screw things up in a huge way. I assumed this would be the case between Mac and Windows and didn't test it explicitly because of all the problems I had to fix when I made a mistake between Macs. I've also read on several sites that it doesn't work, so I played it safe on that one. If you're syncing between Macs and Windows PCs, there's something more complex you can try. @Madrilenyo: @Madrilenyo: I'm using a single library on two networked machines. Host machine: 1 - Create a directory to put your iTunes library in. 2 - Share it on the network 3 - Map a drive letter to it, say Drive X: 4 - Start iTunes and point it at drive X: to create a new library, or migrate your existing library to X: Guest machine, Also map drive X: to //host_machine/shared_folder (whatever your machine name and share are called)

Western-backed resolution on Syria doomed? Published time: January 27, 2012 11:25 Edited time: January 28, 2012 08:39 The UN Security Council is due to consider a new resolution on Syria, which demands that the country’s authorities step down. Russia however has stated that the draft offered by the West and the Arab League has no chance of being passed as it is. ­"The UN Security Council will meet in closed consultations this Friday 3:00 pm in New York to discuss steps to take on the situation in Syria," France's UN mission Twitter page informed. The draft resolution was reportedly proposed by France and supported by the United States, the UK, Portugal, Germany and the Arab countries. It comes as an alternative to the draft earlier proposed by Russia, which pushes for peaceful resolution of the conflict. According to the Itar-Tass news agency, the new draft will demand that the Syrian regime stop all violence in Syria, withdraw armed forces from inhabited areas and allow peaceful rallies.

5 Ways to Get Rid of Your Damn Empty Modifiers I discussed the need to get rid of empty emphatics when I gave you 8 words to seek and destroy in your writing, but just saying that you should get rid of a thing doesn't say much about the right way to do so. Today I'm going to show you a few of my favorite ways to get rid of your empty modifiers. What exactly is an empty modifier? It's any word whose only role is to intensify the word it's modifying. I'm not saying that empty modifiers should never be used. 1. Sylvia was very crazy. This is the easiest and often the best solution. (Though, these days, you may need to use something a bit more extreme to earn the cut; I offer "mother-fucking" for your consideration.) 2. Bob was really ugly hideous. When I started dating my second serious girlfriend, we quickly fell in like. Both of us were using the repeated "really" as a way to avoid saying the more powerful—and culturally loaded—word that captured our mutual infatuation. There are more powerful versions of most words out there. 3. 4. 5.

A Collaborative Classroom What's ideal when it comes to collaboration in our classrooms? Here's one coveted scenario: several children gathered at a table engaged in a high-level task, discussing, possibly debating an issue, making shared decisions, and designing a product that demonstrates all this deeper learning. As teachers, we'd love to see this right out the gate, but this sort of sophisticated teamwork takes scaffolding. It won't just happen by placing students together with a piece of provocative text or an engaging task. (Heck, this deeper learning collaboration is challenging for most adults!) In preparing our students for college and careers, 21st century skills call on us to develop highly collaborative citizens -- it's one of the 4 Cs, after all. So how do we begin this scaffolded journey? Establish Group Agreements Deciding on group norms, or agreements, right at the get go will give each student a voice and provide accountability for all. Teach Them How to Listen Teach Them How To Negotiate