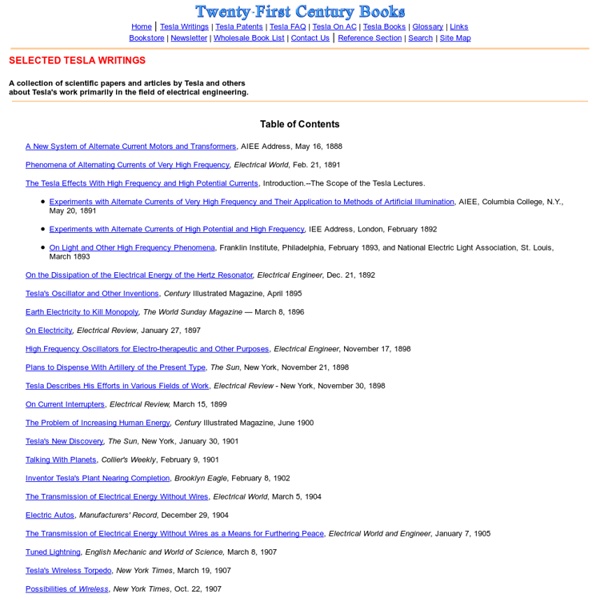 "The Problem of Increasing Human Energy" by Nikola Tesla DIAGRAM a. THE THREE WAYS OF INCREASING HUMAN ENERGY. Let, then, in diagram a, M represent the mass of man. This mass is impelled in one direction by a force f, which is resisted by another partly frictional and partly negative force R, acting in a direction exactly opposite, and retarding the movement of the mass. Viewed generally, there are obviously two ways of increasing the mass of mankind: first, by aiding and maintaining those forces and conditions which tend to increase it; and, second, by opposing and reducing those which tend to diminish it. Conversely, it scarcely need be stated that everything that is against the teachings of religion and the laws of hygiene is tending to decrease the mass. For every person who perishes from the effects of a stimulant, at least a thousand die from the consequences of drinking impure water. How to provide good and plentiful food is, therefore, a most important question of the day. There seems to be no philosophical necessity for food.

Pure mathematics An illustration of the Banach–Tarski paradox, a famous result in pure mathematics. Although it is proven that it is possible to convert one sphere into two using nothing but cuts and rotations, the transformation involves objects that cannot exist in the physical world. Broadly speaking, pure mathematics is mathematics that studies entirely abstract concepts. This was a recognizable category of mathematical activity from the 19th century onwards,[1] at variance with the trend towards meeting the needs of navigation, astronomy, physics, economics, engineering, and so on. Another view is that pure mathematics is not necessarily applied mathematics: it is possible to study abstract entities with respect to their intrinsic nature, and not be concerned with how they manifest in the real world.[2] Even though the pure and applied viewpoints are distinct philosophical positions, in practice there is much overlap in the activity of pure and applied mathematicians. History[edit] 19th century[edit]

String Theory for Kids (and Clever Adults) | String theory explained for kids, teens, and even adults. Vector Addition A variety of mathematical operations can be performed with and upon vectors. One such operation is the addition of vectors. Two vectors can be added together to determine the result (or resultant). This process of adding two or more vectors has already been discussed in an earlier unit. These rules for summing vectors were applied to free-body diagrams in order to determine the net force (i.e., the vector sum of all the individual forces). In this unit, the task of summing vectors will be extended to more complicated cases in which the vectors are directed in directions other than purely vertical and horizontal directions. There are a variety of methods for determining the magnitude and direction of the result of adding two or more vectors. The Pythagorean Theorem The Pythagorean theorem is a useful method for determining the result of adding two (and only two) vectors that make a right angle to each other. To see how the method works, consider the following problem: SCALE: 1 cm = 5 m

Scalars and Vectors Physics is a mathematical science. The underlying concepts and principles have a mathematical basis. Throughout the course of our study of physics, we will encounter a variety of concepts that have a mathematical basis associated with them. The motion of objects can be described by words. Scalars are quantities that are fully described by a magnitude (or numerical value) alone. The remainder of this lesson will focus on several examples of vector and scalar quantities (distance, displacement, speed, velocity, and acceleration). Check Your Understanding 1.