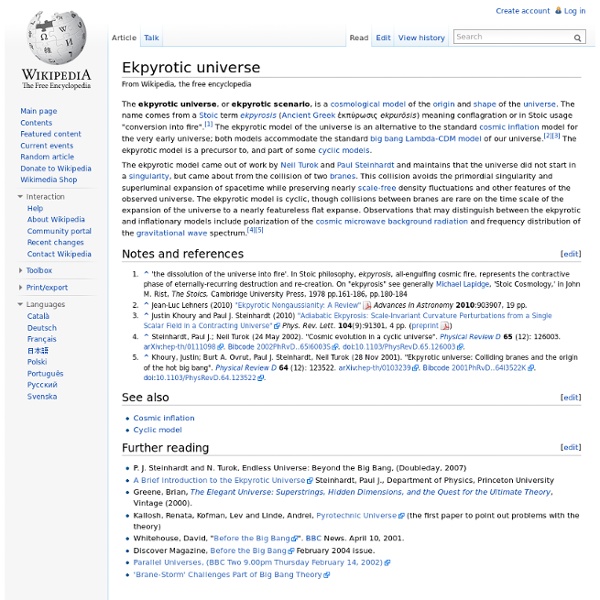 Cosmological principle Astronomer William Keel explains: The cosmological principle is usually stated formally as 'Viewed on a sufficiently large scale, the properties of the Universe are the same for all observers.' This amounts to the strongly philosophical statement that the part of the Universe which we can see is a fair sample, and that the same physical laws apply throughout. The cosmological principle contains three implicit qualifications and two testable consequences. The second implicit qualification is that "looks the same" does not mean physical structures necessarily, but the effects of physical laws in observable phenomena. The cosmological principle is first clearly asserted in the Philosophiæ Naturalis Principia Mathematica (1687) of Isaac Newton. Implications[edit] The universe is now described as having a history, starting with the Big Bang and proceeding through distinct epochs of stellar and galaxy formation. Justification[edit] Criticism[edit] See also[edit] References[edit]

Hindu cycle of the universe See also Hindu units of measurement. This is similar to the Cyclical Universe Theory in physical cosmology. The Big Bang is described as the birth of the universe (Brahma), the life of the universe then follows (Vishnu), and the Big Crunch would be described as the destruction of the universe (Shiva). In a number of stories from the Puranas the continual creation and destruction of the universe is equated to the outwards and inwards breaths of the gigantic cosmic Maha Vishnu. Hindu thesis of creation[edit] Initially everything was unmanifested and was one without a second . In vishnu purana ,It is stated that the purusha(GOD) manifests himself into three forms to maintain the material realm or the manifested realm . Karnodakasayi Vishnu expands himself as Garbhodakasayivisnu and enters into each universe and from Garbhodakasayivisnu originates bhrama from the naval . Hindu viewpoint of modern cosmology[edit] Even string theory finds a place in the Hindu texts. The end of the universe[edit]

Multiverse (religion) In religion a multiverse is the concept of a plurality of universes. Some religious cosmologies propose that the cosmos is not the only one that exists. The concept of infinite worlds is mentioned in the Apannaka Jataka: "Disciples," the Buddha said "nowhere between the lowest of hells below and the highest heaven above, nowhere in all the infinite worlds that stretch right and left, is there the equal, much less the superior, of a Buddha. The concept of multiple universes is mentioned many times in Hindu Puranic literature, such as in the Bhagavata Purana: Every universe is covered by seven layers — earth, water, fire, air, sky, the total energy and false ego — each ten times greater than the previous one. The number of universes seems to be uncountable according to the Puranic literature: Even though over a period of time I might count all the atoms of the universe, I could not count all of My opulences which I manifest within innumerable universes (Bhagavata Purana 11.16.39)

Buddhist cosmology Buddhist cosmology is the description of the shape and evolution of the Universe according to the Buddhist scriptures and commentaries. Introduction[edit] The self-consistent Buddhist cosmology which is presented in commentaries and works of Abhidharma in both Theravāda (31 planes, Sakwala Vibhanga) and Mahāyāna traditions, is the end-product of an analysis and reconciliation of cosmological comments found in the Buddhist sūtra and vinaya traditions. No single sūtra sets out the entire structure of the universe. Kalpa Vibhangaya However, in several sūtras the Buddha describes other worlds and states of being, and other sūtras describe the origin and destruction of the universe. Buddhist cosmology can be divided into two related kinds: spatial cosmology, which describes the arrangement of the various worlds within the universe, and temporal cosmology, which describes how those worlds come into existence, and how they pass away. Spatial cosmology[edit] Vertical cosmology[edit]

The All The universe understood in relation to the All[edit] The following is commentary on possibilities about The All but not anything necessarily accepted by Hermeticists in general. According to The Kybalion, The All is a bit more complicated than simply being the sum total of the universe. Rather than The All being simply the physical universe, it is more correct to say that everything in the universe is within the mind of The All, since the ALL can be looked at as Mind itself.[3] In effect, the universe is partially existent on the Mental plane, and we may in fact all be parts of The All's psychological makeup, representing parts of The All in its dream or meditation. The Three Initiates (see The Kybalion) strongly caution that we restrain from simply declaring "I am God" for oversimplification purposes. Though you are a part of The All, you are but one small piece of that puzzle. Because of this view, some Hermetics also practice theurgy. Explaining why The All acts[edit] [edit] Nous[edit]

Dyson's eternal intelligence The intelligent beings would begin by storing a finite amount of energy. They then use half (or any fraction) of this energy to power their thought. When the energy gradient created by unleashing this fraction of the stored fuel was exhausted, the beings would enter a state of zero-energy-consumption until the universe cooled. Once the universe had cooled sufficiently, half of the remaining half (one quarter of the original energy) of the intelligent beings' fuel reserves would once again be released, powering a brief period of thought once more. Two recent observations have presented problems for Dyson's scenario. However, even if intelligence cannot continue its own survival indefinitely in an ever-expanding Universe, it may be able to create a `baby universe' via a wormhole in spacetime, add some DNA[original research?] See also[edit] References[edit]