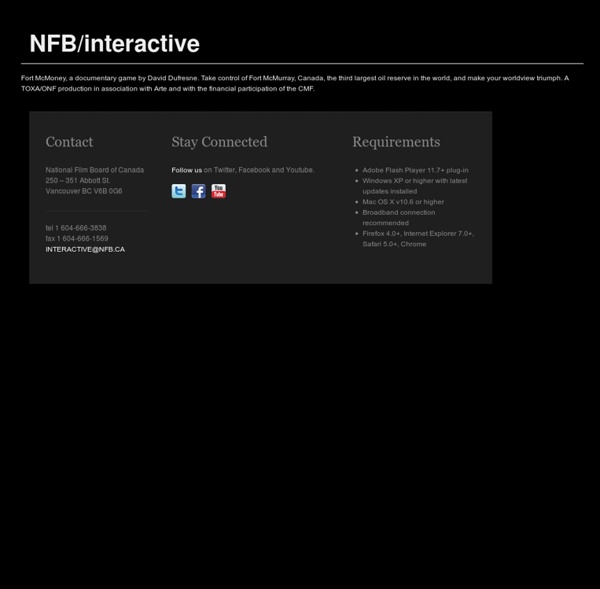 30 Compelling Examples of Visual Storytelling on the Web Storytelling is a powerful approach that can, when done right, compel users to convert more effectively than what any amount of optimization, crazy visual callouts, or awesome interactive elements can do otherwise. Much like how we expect to see a moral at the end of a book, we expect to find a purpose at the end of a site with a storytelling experience. When the path to the “moral of the story” (or conversion point, to be more specific) is laid out clearly in front of our users’ eyes, the rest of the work lies simply in convincing them that the purpose is really worth grabbing on to… which is great since with storytelling, a user is normally in the mindset of learning more about what the story has to offer. So take a look at the examples below and experience how their visual storytelling compels you to continue scrolling down their pages! 1.

The Pinterest Guide For Teachers - eLearning Industry How Does Pinterest Work? Pinterest allows its members to create a board on virtually any topic and pin images to that board. Other members, called pinners, are able to follow a board and repin any images they find interesting onto their own boards. Here’s the terminology further explained. Pinterest Terminology Board: Your board is where you “pin” images. Read: Interview with David Dufresne, Creator of Upcoming Interactive Documentary Game “Fort McMoney” – Center for Documentary Studies at Duke University Still from the trailer for “Fort McMoney” A much-anticipated interactive documentary game about the Canadian oil industry will launch on November 25. Coproduced by the National Film Board of Canada and Toxa, a Montreal-based media company, Fort McMoney will give players the power to decide the (virtual) future of Fort McMurray, a real oil-boom town in Alberta, Canada at the heart of the world’s energy future.

Nik Collection Today we’re making the Nik Collection available to everyone, for free. Photo enthusiasts all over the world use the Nik Collection to get the best out of their images every day. As we continue to focus our long-term investments in building incredible photo editing tools for mobile, including Google Photos and Snapseed, we’ve decided to make the Nik Collection desktop suite available for free, so that now anyone can use it. The Nik Collection is comprised of seven desktop plug-ins that provide a powerful range of photo editing capabilities -- from filter applications that improve color correction, to retouching and creative effects, to image sharpening that brings out all the hidden details, to the ability to make adjustments to the color and tonality of images.

Planet Money Makes A T-Shirt Why A T-Shirt? We wanted to see the hidden world behind clothes sold in this country, so we decided to make a T-shirt. We wanted to make an ordinary shirt like the vast majority of the shirts sold in this country — not organic cotton, not hand-sewn in the United States. To figure out how many shirts to make, and to raise money to pay for them, we turned to Kickstarter. Our goal was to sell 2,000 shirts. The Geek's Guide For Choosing The Perfect Board Game [Chart] We’ve written so much about online gaming and retro arcade games on Bit Rebels. Those are two styles of gaming that we really love and can relate to since we play both of them, a lot. People who aren’t familiar with the current game trends might not realize how fast, easy and fun playing a simple game can be.

Cover Story: Bat for Lashes Across 2006’s Fur and Gold and 2009’s Two Suns, much of Khan’s mystic brand of pop involved a tension between open-hearted sympathy and something more rogue, her guileless voice keeping the flights of fancy just earthward enough. She wants the new album to sound like “an inventor living in a lighthouse” somewhere on the English coast. Twist your ear the right way and you can sort of hear it: that salt-washed, weathered, mechanical, isolated, magical, guiding feel, looking to a man whose purpose is to generate beams of light as well as light-bulb moments. Khan wrote a song about a lighthouse keeper of sorts for The Haunted Man, though it didn’t make the final record. Hopefully she’ll release it one day, as the concept is bewitching: She imagined being the wife of Dutch sculptor Theo Jansen, best known as the creator of enormous, animal-like, moving structures dubbed Strandbeests.

Maya Angelou's Autobiography, I know why the caged bird sings. 1) The action takes place in a Colored Methodist Episcopal Church 2) The narrator is Marguerite, indeed Maya Angelou because it's an autobiographie. 3)She finds difficukt to recite a poem in the church, in front of a lot of people. 101 Years of Tour de France Globalization This year is the 101st edition of the Tour de France. What was once a predominantly French race—created to up the sales of the sports newspaper L’Auto—is now a global competition, with riders from 34 countries joining the race. Here’s a geographic look at every rider, every race. By Xaquín G.V., Kelsey Nowakowski, Anna Scalamogna, and Joey Fening, NG staff; Art by Álvaro Valiño.Sources: Le Tour, Bill McGann of BikeRaceInfo.com