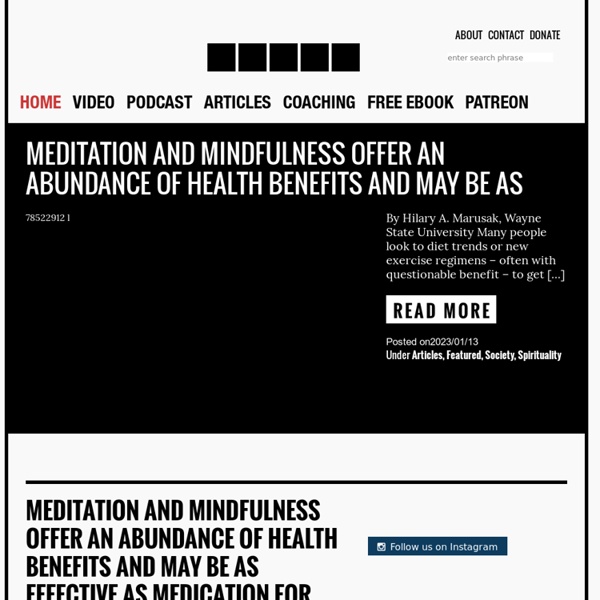 Cost of War to the United States About | Embed | Notes & Sources To embed the Cost of Military Action Against ISIS counter on your website, blog, etc, follow these simple instructions: 1) Add the following javascript to your page: Add the following code wherever you want the counter to show up: NOTE: This doesn't need to be a <div>. Use whatever tag you need.

10 Most Influential People in the Alternative Media (2011) Activist Post Many readers will expect to see Matt Drudge or Arianna Huffington on this list. Although they both indeed have leading Internet news websites that cover some fringe stories and report on systematic injustices more so than the mainstream media, they primarily aggregate mainline news. Therefore, they are excluded from our “alternative media” label. masaru emoto In all of these experiments, distilled water for hospital usage produced by the same company was used. Since it is distilled twice, it can be said that it is pure water. The result was that we always observed beautiful crystals after giving good words, playing good music, and showing, playing, or offering pure prayer to water. Poe’s law explains why 2016 was so terrible. Screenshot via CNN We will all remember 2016’s political theater for many reasons: for its exhausting, divisive election, for its memes both dank and dark, for the fact that the country’s first female presidential candidate won the popular vote by a margin of 2.8 million and still lost the election to an actual reality show villain. But 2016 was also marked—besieged, even—by Poe’s law, a decade-old internet adage articulated by Nathan Poe, a commentator on a creationism discussion thread. Building on the observation that “real” creationists posting to the forum were often difficult to parse from those posing as creationists, Poe’s law stipulates that online, sincere expressions of extremism are often indistinguishable from satirical expressions of extremism. A prominent example of Poe’s law in action is the March 2016 contest to name a British research vessel that cost almost $300 million. The same kinds of questions apply to Trump’s entrée into foreign policy issues.

Conspiracy Watch conspiracywatch.net may be available for purchase. Inquire today! Inquiry Form Inquire with your Facebook or LinkedIn profile, or complete this form to receive a free quote. Spirit Science Spirit Science is the animated series that started it all. The show follows Patchman, a little multidimensional patch-doll who takes you on a journey into the unknown and begins a long discussion about what it means to be Spiritual. Thoughts, Chakras, Sacred-Geometry, Astral Travel, and even Atlantis, through Spirit Science we look at all of these topics. Most people don’t realize that there is a very powerful connection between Spirituality and Science. How Photos Fuel the Spread of Fake News During a campaign stop in South Carolina last winter, Hillary Clinton stumbled as she climbed the steps of an antebellum mansion in Charleston. Aides helped her regain her balance in a vulnerable but nondescript moment captured by Getty photographer Mark Makela. He didn’t think much of it until August, when the alt-right news site Breitbart touted it as evidence of Clinton’s failing health. “It was really bizarre and dispiriting to see,” he says.

World Population Clock: 7 Billion People (2013) World Population: Past, Present, and Future (move and expand the bar at the bottom of the chart to navigate through time) The chart above illustrates how world population has changed throughout history. ZNet Top Welcome to ZCommunications. The site has ZNet and ZMag content, topic and place pages under the Focuses link in the top menu - reading lists and whole books, debates, interviews, multimedia, Blogs, Forums, comments, a Store, Sustainer program, WISC, and more. Relating to Z To participate more deeply and generally in ZCommunications, please become a Sustainer. Sustainers who log in will see "+ New" in the black band at the top. Use that to add a blog post.

There’s a new tool to visualize how fake news is spread on Twitter — Quartz It is nighttime and my young son is asleep; I am awake and trying to help him. If he were a little older I might be gluing something onto a science project or baking cupcakes for a school event. Instead, I am drawing my finger over lines of imaginary fruit on an iPad, trying to rack up points so he can better enjoy a game called Fruit Pop, a matching game similar to the wildly popular Candy Crush. Specifically, I am trying to increase the stack of coins in his account so that he can buy boosts that alter the game in some way (such as giving the player more than the normally allotted sixty seconds per turn). untitled Violence is an unavoidable part of being human Rowan Williams in the New Statesman: It would help if we had a single, clear story we could believe about violence – it’s getting worse because of this or that factor in our world, so we know whom to blame; it’s getting better as we all become more educated and secular, so we don’t have to worry in the long term. But the evidence is profoundly confusing. Richard Bessel begins his lucid and well-documented book with a round-up of contemporary views, from those who think first of the astronomical statistics of humanly devised injury and death in the 20th century to those (like Steven Pinker in a much-discussed recent book) for whom what matters is the gradual change in sensibility that has made us simply more sensitive to the suffering of others – as well as the relative absence of major international conflict in the past half-century or so. More here.