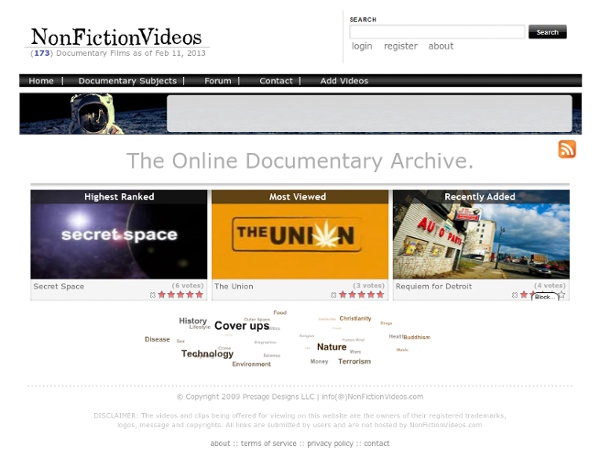 Documentaries, Watch Documentary Films Online Films For Action: Watch the Best Social Change Documentaries, Read Independent News, Take Action Miro | Video Player | Free video and audio podcast player and torrent client. Watch Free Documentaries Online | Documentary-Log.com Browse Documentary Films | Watch Documentaries Online. | Promote Consciousness. Promote Humanity Slaves in the UAE “When two people meet, something good should result for a third.”-The Lubavitcher Rebbe, quoting his father-in-law Rabbi Yosef Yitzchak Schneersohn Wo... A World-Creating Matrix of Truth God said, Let there be light! And there was light. -- Genesis 1:1It was an old story that was no longer true. The Soul of Touch One day last January, at a center for developmentally disabled kids in Ubud, Bali, an Australian volunteer told me that in her country, she’s not allo... Virtually every forbidden topic imaginable has been covered on television, except for one.

The end of TV: Boxee + Apple TV + Hulu | the Tux Geek People want to do much more with their iPhone then Steve Job allows. So they jailbreak it. The same goes for the Apple TV. While it is a great and relatively cheap media center, it has restrictions, just like the iPhone. Boxee is an open source media center, with social networking features, currently in an invite-only alpha stage. What does it do? As other media center software, Boxee allows you to browse and play media files (movies, music, photos) from local hard-disks or DVD drive and can stream music and videos from the internet or other computers in the network (SMB/SAMBA shares). Boxee scans your default media folders and downloads the related metadata and artwork for your music and video files. When playing a song you can choose to see the lyrics (especially useful for a karaoke night) or display information about the band or artist. Boxee seamlessly integrates with online video, music and photo websites and can actually download public torrent movies. Social Features Interface

FreeTube - Watch TV Online for Free with 100s of Live Internet C Free Website and Blog Hosting P4O Hosting is 100% Free, which means you can start and experiment with site creation, advanced dynamic programming, marketing, and other webmaster skills all in the comfortable and secure environment of your own personal hosting space. Unlike other free hosts, P4O.net offers features and services that rival paid hosting, including htaccess, script installers, webmail and addon domains to name a few. Report Abuse We only give you what you need, which is very likely more than you'll ever need. Innovation is essential, at least to P4O Hosting. Numerous users, Just Like YOU, are using P4O to host their profitable money-making websites. Check it out For Your Self, Sign Up Today