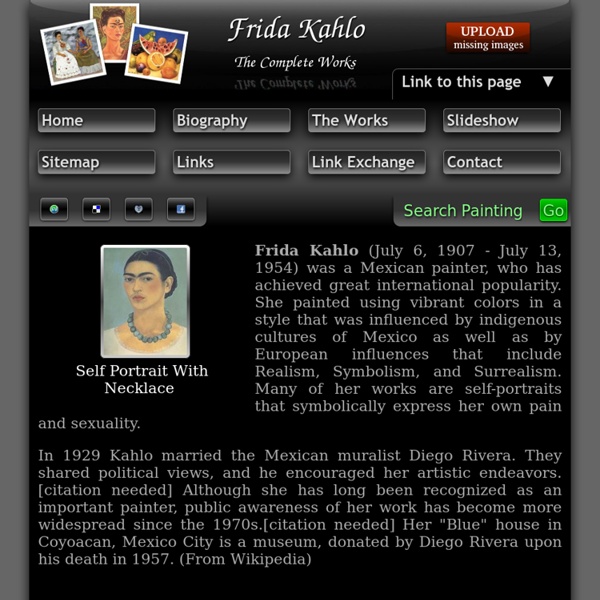 Frida Kahlo (July 6, 1907 - July 13, 1954) was a Mexican painter, who has achieved great international popularity. She painted using vibrant colors in a style that was influenced by indigenous cultures of Mexico as well as by European influences that include Realism, Symbolism, and Surrealism. Many of her works are self-portraits that symbolically express her own pain and sexuality. In 1929 Kahlo married the Mexican muralist Diego Rivera. They shared political views, and he encouraged her artistic endeavors.[citation needed] Although she has long been recognized as an important painter, public awareness of her work has become more widespread since the 1970s.

Barnaby Furnas The explosive moment versus painting's innate stillness has been a central concern of Barnaby Furnas's work over the past decade. Drawing on US history and culture, the American artist presents restless, radiant paintings of subjects including Civil War-era battles and high-octane stadium rock gigs, chronicling crescendos of excitement - religious, political, sexual - as they career towards tipping points of uncertain outcome. These are at once brutal and elegant works, bound up with the excesses of the world yet brought into being through the prism of art history. Frida Kahlo Biography Painter Frida Kahlo was a Mexican self-portrait artist who was married to Diego Rivera and is still admired as a feminist icon. Synopsis Artist Frida Kahlo was born on July 6, 1907, in Coyocoán, Mexico City, Mexico. Considered one of Mexico's greatest artists, Frida Kahlo began painting after she was severely injured in a bus accident.

Frida Kahlo Biography, Art, and Analysis of Works "I've done my paintings well... and they have a message of pain in them, but I think they'll interest a few people. They're not revolutionary, so why do I keep on believing they're combative?" Synopsis Frida Kahlo's work was influenced by traumatic physical and psychological events from her childhood and early adulthood, including a crippling accident and the infidelity of her husband.

Rembrandt Self-portraits in chronological order Self-portraits in chronological order by REMBRANDT It is particularly interesting if the various stages of the creative renewal of an artist can be followed on self-portraits so that the change in style and the change in maturity can be studied simultaneously. From this point of view Rembrandt's self-portraits are without parallel. Juan Sánchez Cotán Juan Sánchez Cotán (June 25, 1560 – September 8, 1627) was a Spanish Baroque painter, a pioneer of realism in Spain. His still lifes—also called bodegones—were painted in an austere style, especially when compared to similar works in the Netherlands and Italy. Life[edit] Sánchez Cotán was born in the town of Orgaz, near Toledo, Spain. He was a friend and perhaps pupil of Blas de Prado, an artist famous for his still lifes whose mannerist style with touches of realism the disciple developed further.

Art New Zealand There is an element of mystery surrounding the artistic career of Gordon Walters. Many people would connect his name with only one type of painting: the 'koru' motif works on which his reputation rests. And few would know anything about his stylistic evolution. Yet, when Walters first exhibited his distinctive works in Auckland in 1966 he was no young painter having his first show; nor was he a late starter turning to painting in mid-career. He was forty-six and had been painting seriously for twenty-six years. Iconic Hokusai Prints: Thirty-Six Views of Mount Fuji When you bring to mind Japan, chances are that the majestic form of Fuji-san will loom large. Japan’s highest mountain, Mount Fuji is a sacred site for the Shinto faith, an enduring presence and recurring motif in Japanese literature and poetry. It’s also a popular tourist attraction in its own right; climbing its peak is the reason that many visit Japan in the first place. What’s more, its venerable size means that when the skies are clear, it can be viewed from Tokyo itself — almost like an overbearing ancestor keeping track of the city’s behavior. Majestic and beautiful, many artists and writers have tried to capture the brilliance and power of the snow-capped summit. And of all its representations, perhaps the most well-known is Katsushika Hokusai’s woodblock print series Thirty-Six Views of Mount Fuji (1830-32).