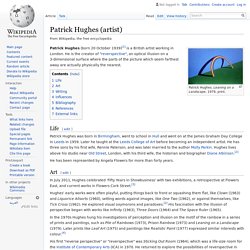 Leaning on a Landscape, 1979, print. He has been represented by Angela Flowers for more than forty years. His work entitled Paradoxymoron is currently exhibited in the British Library, London. The World Through The Eyes Of Sammy Slabbinck. Courtesy of Sammy Slabbinck. 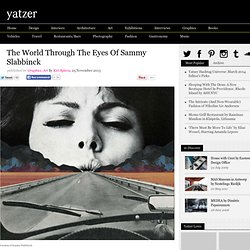 Playfully distorting proportion and cultural context, Belgian artist Sammy Slabbinck’s work comprises surreal collages and illustrations that somewhat unexpectedly combine vintage with contemporary images. Slabbinck likes to play around with different styles and proportions with the aim of creating powerful yet simple visual works that are permeated by a subtle sense of humour. His carefully composed images create startling juxtapositions and present new meanings through a masterful combination of completely heterogenous elements and a clever use of scale and form.

An avid collector of magazines and books from the 50’s, 60’s and 70’s, the artist takes full advantage of the muted tones and rich textures that he finds in his source material, namely vintage advertisements, photography and print. Juan Gatti: “Ciencias Naturales” Written on Aug 06, 2013 // Arte. 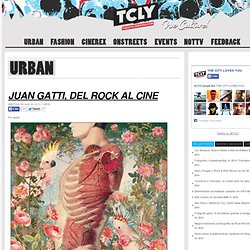 The Little-Known Art of J.R.R. Tolkein. By Maria Popova An important side of the beloved writer, who was as much an artist of pictures as he was of words. 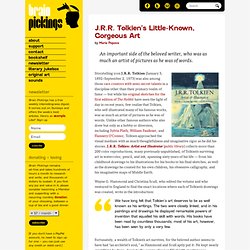 Storytelling icon J.R.R. Tolkien (January 3, 1892–September 2, 1973) was also among those rare creators with semi-secret talents in a discipline other than their primary realm of fame — but while his original sketches for the first edition of The Hobbit have seen the light of day in recent years, few realize that Tolkien, who self-illustrated many of his famous works, was as much an artist of pictures as he was of words. Unlike other famous authors who also drew but only as a hobby or diversion, including Sylvia Plath, William Faulkner, and Flannery O’Connor, Tolkien approached the visual medium with as much thoughtfulness and imaginative rigor as he did his stories.

J.R.R. Wayne G. Best of Stefan Pabst's 3D DRAWINGS. Illustrator Julia Wytrazek draws the Scoody Doo gang in the fashions of each decade of the 20th Century. From Velma’s geek chic specs to Daphne’s iconic purple dress, the Scooby Doo gang have always been style gurus in their own right. 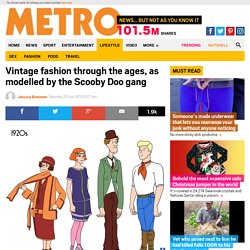 Illustrator Julia Wytrazek, noticing how the characters’ outfits were subtlety tweaked and updated over the years, decided to re-imagine the crime-fighting pals in all the different fashions of the 20th century. The Incredible Illustrations of Solongo Monkhooroi. Daniel Danger - Tiny Media Empire. Most Stunning Art Installations in 2013.

Out of all the different types of art forms we write about on a daily basis, there's one that clearly stands apart from the rest - installation. 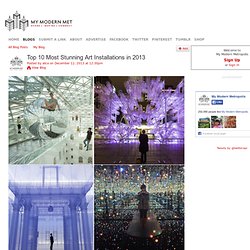 According to Merriam-Webster, an installation is defined as "a work of art that usually consists of multiple components often in mixed media and that is exhibited in a usually large space in an arrangement specified by the artist. " Why do we love installation art? For many reasons. First, it's oftentimes immersive, providing visitors with a multi-sensory experience. Next, it's site-specific, meaning that piece of art was built for that particular time and space. The cast of Futurama by Unrellius. 15 astounding examples of photorealism. These illustrators, painters and artists have an unfathomable talent. 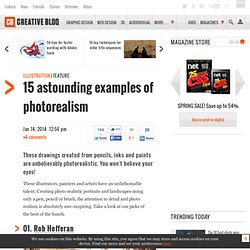 Creating photo realistic portraits and landscapes using only a pen, pencil or brush, the attention to detail and photo realism is absolutely awe-inspiring. Alex Gross. Dran. Based in Toulouse, Dran is a multi-talented artist who uses a variety of media such as installations, paintings and drawings to convey his ironic viewpoint. 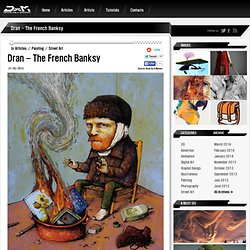 After developing his skills as part of Toulouse’s renowned graffiti scene. He is also a fan of the absurd and has published a number of books featuring his funny sketches parodying everyday events with great doses of surrealism. Check him at retroactif.free.fr/dran. I tried to find gritty Star Wars art. Louis Wain - Schizofrenia and Cats. What happens when a classic Victorian illustrator lives through poverty, World War I, and the deaths of a sister, mother, and wife; all in the space of a few years? 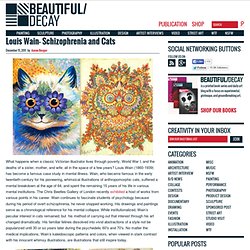 Louis Wain (1860-1939) has become a famous case study in mental illness. Wain, who became famous in the early twentieth-century for his pioneering, whimsical illustrations of anthropomorphic cats, suffered a mental breakdown at the age of 64, and spent the remaining 15 years of his life in various mental institutions. The Chris Beetles Gallery of London recently exhibited a host of works from various points in his career. Intestine Man Petroglyph Panel, BLM Lands, Grand County, Utah. An Illustrated Book of Bad Arguments.

A reader recently wrote in asking if I could share a bit about the process of putting the book together and talk about how the project started. 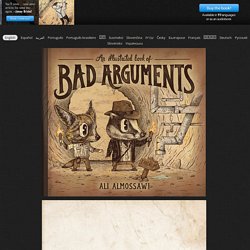 Certainly. I go on two solitary walks every day. There is a small park off the Embarcadero that is tucked away in a quiet spot. It has a pleasant stream flowing through it and an unassuming bench beside that stream. I have made walking to that frail bench a ritual, and the half an hour or so spent daydreaming on it amid the cool San Francisco breeze, an article of faith.

Artists. Henry Darger: Art by Any Means. This post is a bit different than what we normally share on Abduzeedo but I couldn't resist sharing it anyways. I recently watched one of the most inspiring documentaries I've ever seen, titled, In the Realms of the Unreal. In it acclaimed documentary film maker Jessica Yu tells the story of the mysterious self-taught artist Henry Darger. From minute one my jaw was on the floor and I was swept away into the fantastic world he had created. Hello: The Art of Esao Andrews. Francois Abelanet's vertigo-inducing street. Stunning images offer a 3D glimpse into surreal worlds, giving the impression viewer is thousands of feet above sceneWorks created by French artist Francois Abelanet for an event showcasing the latest range of Renault trucksThe work was also an attempt to enter the Guinness Book of Records for the largest street art work By James Rush Published: 18:45 GMT, 6 July 2013 | Updated: 20:56 GMT, 6 July 2013.

Jean Jullien's online portfolio: Allo? My Aloysius: Archive. Yoriko Yoshida - "Asialphabet" 04 Nov 2010 Artist Yoriko Yoshida's "Asialphabet" illustrations depict the Roman alphabet (minus Q and X) as Japanese cultural items and traditions. Rubén Belloso Adorna. We’ve all had our eyes fooled by artists with photorealistic techniques such as Pedro Campos’ picture perfect oil paintings, Paul Cadden’s hyperrealistic pencil drawings, Samuel Silva’s ballpoint pen drawing, and Nathan Welsh’s city paintings, but never before had we seen it done with chalk…until now! Rubén Belloso Adorna of Seville, Spain creates enormous portraits that are so detailed, you would not believe they are not photographs, but they are actually drawings made with chalk pastels. You can see the true magnitude of each drawing when you see the photos of Adorna working on them, yet even when you zoom in and look closely they still look like a high definition photo.

See Also WHITEBOARD DRAWINGS DONE ON A SHORT LUNCH BREAK The 26 year old artist holds a degree in Fine Arts from the University of Seville. He has received much recognition for his work throughout Spain and internationally, with exhibitions in galleries throughout Italy, Spain, and Portugal. Via: Reddit.com. William Wegman. Jason Lee Creatively Captures His Kids. If there was a prize that could be given out to the most creative father, I'd hope that it was awarded to Jason Lee. A wedding photographer by day, he's used to capturing some of the most important moments in a couple's lives. As a longtime fan of Jason's photos on Flickr however, I think the real magic happens when he turns the camera onto his daughters.

Sure, his children are adorably cute in their own right, but that's not what makes his photos so interesting. Audrey Kawasaki. A Perfect Monster — art by John Dyer Baizley. David Copithorne. 2013 Demo Reel Motion Graphics Seascapes 3D Geometric Photography Twisted Photography Photography Designs 35mm Film Designs Travel People 35mm Film. The Sistine Chapel by Michelangelo. 13 Disturbing Works of Art by Female Artists. After we posted 13 Disturbing Pieces of Art from History , several readers pointed out that none of the works were created by female artists. So, here are 13 more disturbing pieces of art, and they’re all created by women. 1.

Artemesia Gentileschi - Judith and her Maidservant The most remarked-upon absence from the previous list was Artemesia Gentileschi’s version of Judith Slaying Holofernes (as opposed to the Caravaggio, Judith Beheading Holofernes , that we featured). Charlie Layton - Drawings on the Fridge. Rik Olson, master woodworker. Self-Portraits. A Series of Small Things. Collages by Alexis Anne Mackenzie. Randal Ford.

Matt Wisniewski. But Does it Foat? 15 awesome illustrators you should know. Is really impressive to see how many talented illustrators there are out there, sharing their work on the Internet. Kathleen's Curiosities by lolley. Lori Nix. The Art of Frank Frazetta. Morph. Empty Kingdom. The Only Guide You Will Ever Need to Art Nouveau. So a few of you shamelessly encouraged me to discuss Art Nouveau.

I don't think you guys even knew what you were getting into. I love Art Nouveau. It's quite easily the single greatest influence on my art and general aesthetic... ever. And because I'm me, I couldn't just be like OH HERE ARE SOME PRETTY PICTURES.