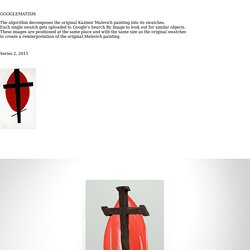 These images are positioned at the same place and with the same size as the original swatches to create a reinterpretation of the original Malevich painting. 75,5 cm x 46,5 cm, Diasec. Artist Turns the Google Art Project’s Blurry Canvases Into Hazy Abstract Paintings. “The internet provides a huge amount of material which otherwise would be unattainable to most people,” the artist told Wired. 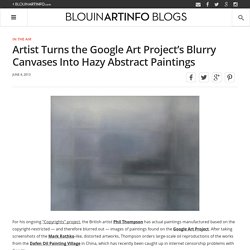 “It has led to a lot of creativity — whether it is with memes or highly skilled photoshop jobs — everyone is now able to create and edit images.” Google Art Project: Phil Thompson Talks Copyright Issues And Outsourcing Chinese Talent (PHOTOS) British artist Phil Thompson has imagined a playful way to address issues of appropriation and ownership in the art world. 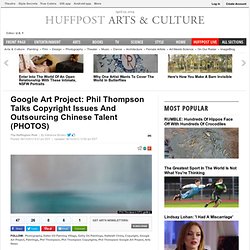 The mind behind projects like "Getty Oil Paintings" and "Hallstatt, China" has taken to recreating the artworks he finds on Google Art Project -- an archive of over 45,000 works of art online. Using the program, which functions much like the tech behemoth's other app, Google Street View, art admirers can traverse the halls of art museums from the confines of their own home, shifting the perspective at will. Except there's one hitch, or glitch, which Thompson's project "Copyrights" so cleverly points out.

AmbientTV.NET. Klangfiguren – Material Tweet. Netart or notart? Totally Fucking Radical. Molly Dilworth - projects. August 2010, Google Earth view of 16 Manhattan Avenue, Brooklyn NY Paintings for Satellites I have an inclination to work with materials that have had an obvious life before I use them; it's a challenge and a pleasure to make something from nothing. 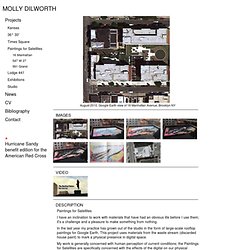 In the last year my practice has grown out of the studio in the form of large-scale rooftop paintings for Google Earth. This project uses materials from the waste stream (discarded house paint) to mark a physical presence in digital space. My work is generally concerned with human perception of current conditions; the Paintings for Satellites are specifically concerned with the effects of the digital on our physical bodies. All my work begins a series of rules derived from existing conditions. As this project proliferates, it will take two forms - a community model, using local volunteers and paint from the waste stream and a design/build model, using solar-reflective paint, solar panels and green roofing contractors. Mapmaker, Artist, or Programmer? Some people look at the abundance of urban data out there and see an academic research paper. 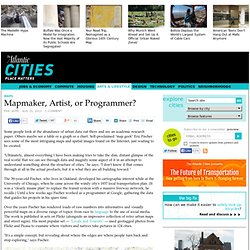 Others maybe see a table or a graph or a chart. Self-proclaimed "map geek" Eric Fischer sees some of the most intriguing maps and spatial images found on the Internet, just waiting to be created. Janet Sobel by Chandler McWilliams, Jackson Pollock by Miltos Manetas, original design by Stamen, press any key to s. David Morgan-Mar - DM's Esoteric Programming Languages - Piet. Introduction Piet is a programming language in which programs look like abstract paintings. 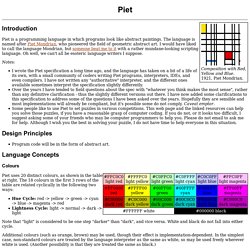 The language is named after Piet Mondrian, who pioneered the field of geometric abstract art. I would have liked to call the language Mondrian, but someone beat me to it with a rather mundane-looking scripting language. Oh well, we can't all be esoteric language writers I suppose. Notes: Thomas Schoch - Obfuscated Programming – Piet. These two GIF images are programs "painted" in the programming language Piet. 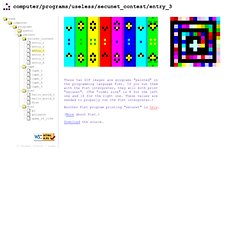 If you run them with the Piet interpreter, they will both print "secunet". (The "codel size" is 8 for the left one and 16 for the right one. These values are needed to properly run the Piet interpreter.) Another Piet program printing "secunet" is here. (More about Piet.) Download the source. Jerome Saint-Clair (01010101) Arend deGruyter-Helfer. Echappées culturelles. #Psychovinyle #Trackshare #Replay. 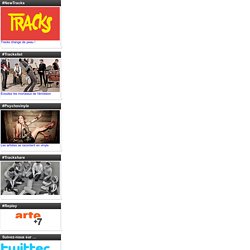 11 Net Artists You Should Know. “Internet art” has been around as long as long as the Internet itself. 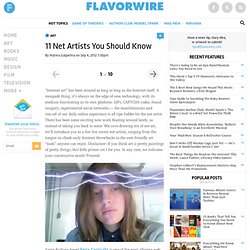 A renegade thing, it’s always on the edge of new technology, with its medium functioning as its own platform. GIFs, CAPTCHA codes, found imagery, experimental social networks — the manifestations and run-off of our daily online experience is all ripe fodder for the net artist. There has been some exciting new work floating around lately, so instead of taking you back to some ’80s cave drawing era of net art, we’ll introduce you to a few fun recent net artists, ranging from the tongue-in-cheek early Internet throwbacks to the user-friendly art “tools” anyone can enjoy.

GIF-iti Is Street Art That You Can See Only Online. An artist's quest to make art tailored to the Internet, in the physical spaces of modern Los Angeles, London, and Newcastle That up there might look like some very cool but not particularly unusual street art. 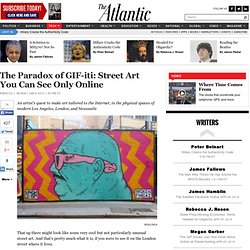 And that's pretty much what it is, if you were to see it on the London street where it lives. But that physical instantiation is only a remnant of an art project, not its final stage -- an art project meant not for a city's streets, but for the Internet's showrooms. Here is it in its completed form, a GIF: