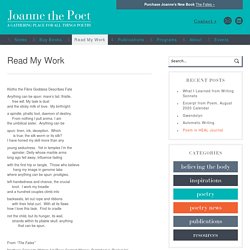 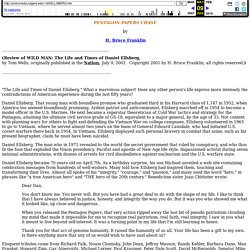 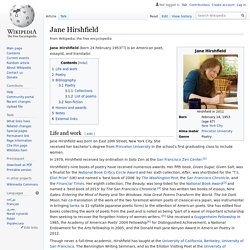 Martha Serpas. Serpas grew up in Galliano, Louisiana, and received her BA from Louisiana State University. 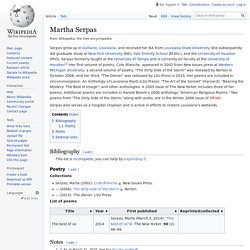 Her poems are included in Uncommonplace: An Anthology of Louisiana Poets (LSU Press); "The Art of the Sonnet" (Harvard); "Bearing the Mystery: The Best of Image"; and other anthologies. A 2005 issue of The New Yorker includes three of her poems. Additional poems are included in Harold Bloom's 2006 anthology "American Religious Poems. " Frits Warmolt Went, May 18, 1903 — May 1, 1990. IF EVER A SCIENTIST could be said to have been born into his profession, it was Frits Went. 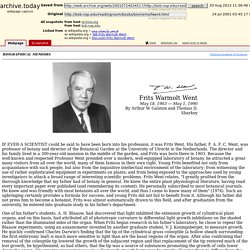 His father, F. A. F. C. Mumia Abu-Jamal. Mumia Abu-Jamal (born Wesley Cook[1] on April 24, 1954) is an American prisoner convicted for the 1981 murder of Philadelphia police officer Daniel Faulkner.[2] His original sentence of death, handed down at his first trial in July 1982, was commuted to life imprisonment without parole in 2012.[3] Described as "perhaps the world's best known death-row inmate" by The New York Times,[4] supporters and detractors have disagreed on his guilt, whether he received a fair trial, and the appropriateness of the death penalty.[5][6][7] Born in Philadelphia, Abu-Jamal became involved in black nationalism in his youth, and was a member of the Black Panther Party until October 1970. 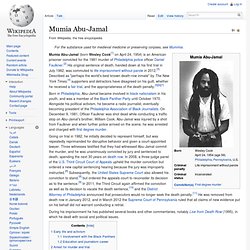 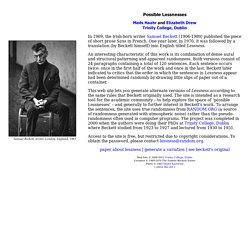 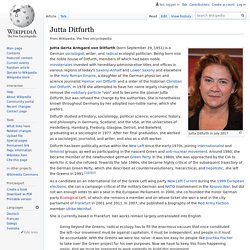 Being born into the noble house of Ditfurth, members of which had been noble ministeriales invested with hereditary administrative titles and offices in various regions of today's Saxony-Anhalt and Lower Saxony and elsewhere in the Holy Roman Empire, a daughter of the German physician and science journalist Hoimar von Ditfurth and a sister of the historian Christian von Ditfurth, in 1978 she attempted to have her name legally changed to remove the nobiliary particle "von" and to become the plainer Jutta Ditfurth, but was refused the change by the authorities.

She is nonetheless known throughout Germany by her adopted non-noble name, which she prefers. She is currently based in Frankfurt. Her works remain largely untranslated into English. Publications[edit] ON THE TRAIL OF LORD BYRON IN VENICE - Venice PrestigeVenice Prestige. 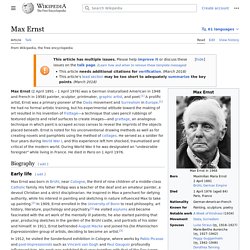 James Graham (sexologist) Graham with some of his patients.

The Temple of Health was a success and Graham became the talk of London, featuring in satirical plays, poems, prints and newspaper skits. During the 1780s he was publicly associated with society figures. Tom Dula. Confederate Army soldier Early life[edit] Tom Dula was born to a poor Appalachian hill country family in Wilkes County, North Carolina,[5] most likely the youngest of three brothers, with one younger sister, Eliza.[6] Dula grew up, attended school, and "probably played with the female Fosters" - Anne (later Melton) and her cousins Laura and Pauline.[7] As the children grew up, Tom and Anne apparently became intimate.

Anne Foster's mother found Anne and Tom in bed together when Anne was 14 years old and Tom was just 12. Gioseffo Zarlino. Sulkhan Tsintsadze. Education[edit] Tsintsadze studied the cello until 1942 with E.N. Kapelniski in Tbilisi at the Gymnasium of Music. He furthered his studies of the cello at the Conservatory of Tbilisi with K. Minjar. From the years 1945 to 1953 he went to the Moscow Conservatory to study the cello with Semyon Matveyevich Kozolupov and composition with Semyon Semyonovich Bogatyryov. Career[edit] Emitt Rhodes - Emitt Rhodes. Alain LeRoy Locke. Alain Leroy Locke (September 13, 1885 – June 9, 1954) was an American writer, philosopher, educator, and patron of the arts. Distinguished as the first African-American Rhodes Scholar in 1907, Locke was the philosophical architect —the acknowledged "Dean"— of the Harlem Renaissance.[1] As a result, popular listings of influential African Americans have repeatedly included him. On March 19, 1968, the Rev.

Dr. Martin Luther King, Jr. proclaimed: "We're going to let our children know that the only philosophers that lived were not Plato and Aristotle, but W. E. Early life and education[edit] John Atkinson Grimshaw, Reflections on the Thames, Westminster,1880 - John Atkinson Grimshaw. John Atkinson Grimshaw (6 September 1836 – 13 October 1893) was an English Victorian-era artist who has been called a "remarkable and imaginative painter"[1] best known for his nocturnal scenes of urban landscapes[2][3] Today, he is considered one of the most renowned painters of the Victorian era, as well as one of the best and most accomplished nightscape, and townscape, artists of all time. John Henry Twachtman. 19th-century American painter John Henry Twachtman (August 4, 1853 – August 8, 1902) was an American painter best known for his impressionist landscapes, though his painting style varied widely through his career. Art historians consider Twachtman's style of American Impressionism to be among the more personal and experimental of his generation.

He was a member of "The Ten", a loosely allied group of American artists dissatisfied with professional art organizations, who banded together in 1898 to exhibit their works as a stylistically unified group. Studies[edit] Dick Cheney. 46th Vice President of the United States Richard Bruce Cheney (/ˈtʃeɪni/;[1] born January 30, 1941) is an American politician and businessman who served as the 46th vice president of the United States from 2001 to 2009. He has been cited as the most powerful vice president in American history.[2][3] He was also one of the most unpopular politicians in the history of the US, holding an approval rating of just 13% at the time of leaving office.[4] Jean Passerat. Jean Passerat (18 October 1534 – 14 September 1602) was a 17th-century French political satirist and poet. Oswald Spengler. German historian and philosopher.

Lillian Hellman. Minicubby.com. Interview with Philip Tseng. Paul Creston. Otto Erich Deutsch. Otto Erich Deutsch (5 September 1883 – 23 November 1967) was an Austrian musicologist. Ernest Fanelli. Cquintana. Bernard Francis Law. Law was the Archbishop of Boston from 1984 until his resignation on December 13, 2002,[1][2] in response to the Roman Catholic Church sex abuse scandal in his archdiocese. Church documents showed he had extensive knowledge of sexual abuse committed by dozens of Catholic priests within his archdiocese and had failed to remove them from the ministry.[3] One priest alone was alleged to have raped or molested 130 children over decades, while Law and other local officials moved him among churches rather than going to the authorities.[3]