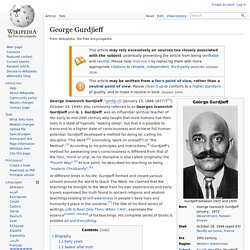 [1]|- October 29, 1949), also commonly referred to as Georges Ivanovich Gurdjieff and G. I. Gurdjieff, was an influential spiritual teacher of the early to mid-20th century who taught that most humans live their lives in a state of hypnotic "waking sleep", but that it is possible to transcend to a higher state of consciousness and achieve full human potential. Gurdjieff developed a method for doing so, calling his discipline "The Work"[2] (connoting "work on oneself") or "the Method".[3] According to his principles and instructions,[4] Gurdjieff's method for awakening one's consciousness is different from that of the fakir, monk or yogi, so his discipline is also called (originally) the "Fourth Way".[5] At one point, he described his teaching as being "esoteric Christianity".[6] At different times in his life, Gurdjieff formed and closed various schools around the world to teach The Work.

§Biography[edit] §Early years[edit] 18 Things Highly Creative People Do Differently. This list has been expanded into the new book, “Wired to Create: Unravelling the Mysteries of the Creative Mind,” by Carolyn Gregoire and Scott Barry Kaufman. Creativity works in mysterious and often paradoxical ways. Creative thinking is a stable, defining characteristic in some personalities, but it may also change based on situation and context. Inspiration and ideas often arise seemingly out of nowhere and then fail to show up when we most need them, and creative thinking requires complex cognition yet is completely distinct from the thinking process. Neuroscience paints a complicated picture of creativity. 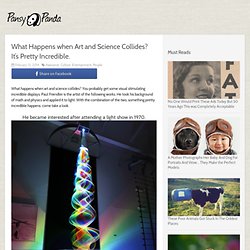 You probably get some visual stimulating incredible displays. Paul Friendler is the artist of the following works. He took his background of math and physics and applied it to light. With the combination of the two, something pretty incredible happens. come take a look. He became interested after attending a light show in 1970. He uses his background of physics and mathematics. He says its a relatively easy setup. I don’t believe him for one bit. He believes light is the closest humans can come to universal energy.

The interplay of form and color produces awe. I can’t imagine watching it live. When viewing it live, these actually move and look more beautiful. Classical crossover that doesn't suck, from Punch Brothers to 2Cellos CBC Music. -scape- the artists of Malice Mizer: Malice Mizer. We Are Unlike You. 33 Awesome Inspirations for Your Dream Home. Each of us probably have an idea about what our individual dream homes would look like. 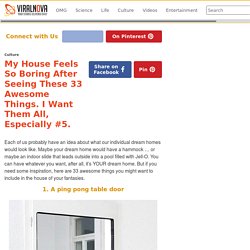 Maybe your dream home would have a hammock ... or maybe an indoor slide that leads outside into a pool filled with Jell-O. You can have whatever you want, after all, it's YOUR dream home. But if you need some inspiration, here are 33 awesome things you might want to include in the house of your fantasies. 1. A ping pong table door 2. The Poster Is Mesmerizing. The Story It Tells Is Electrifying. Have You Seen It? Watching Electricity Flow Through Wood Is Truly Mesmerizing (Video) Everything Any Artist Needs to Know About How to Price Their Art. << Back to Articles for Artists Pricing your art is different from making art; it's something you do with your art after it's made, when it's ready to leave your studio and get sold either by you personally or through a gallery, at an art fair, online, at open studios, through an agent or representative, wherever. 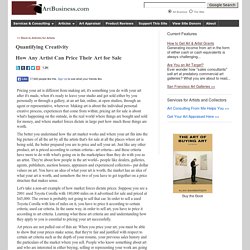 Making art is about the individual personal creative process, experiences that come from within; pricing art for sale is about what's happening on the outside, in the real world where things are bought and sold for money, and where market forces dictate in large part how much those things are worth. The better you understand how the art market works and where your art fits into the big picture of all the art by all the artists that's for sale at all the places where art is being sold, the better prepared you are to price and sell your art. Let's take a non-art example of how market forces dictate prices. 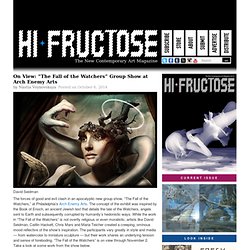 The concept of the exhibit was inspired by the Book of Enoch, an ancient Jewish text that details the tale of the Watchers, angels sent to Earth and subsequently corrupted by humanity’s hedonistic ways. David Van Gough. 500 × 680 - davidvangough.tumblr.com 956 × 350 - davidgoughart.com 494 × 640 - drearypoetry.blogspot.com. 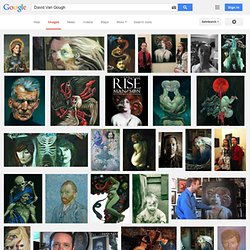