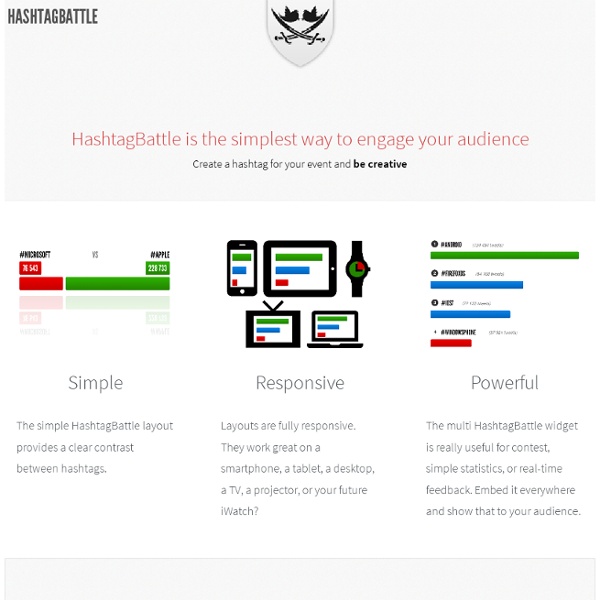 Topsy With iOS 9, Search lets you look for content from the web, your contacts, apps, nearby places, and more. Powered by Siri, Search offers suggestions and updates results as you type. There are two ways to use Search on your iOS device. Quick Search Drag down from the middle of the Home screen and type what you're looking for.

7 Creative Social Media Marketing Mini Case Studies Are you looking for some creative social media marketing ideas from businesses? Look no further. This article highlights seven mini case studies of businesses that have stood out by implementing innovative social media marketing practices. Make your presentations pop with Haiku Deck 102 Flares Twitter 48 Facebook 8 Google+ 23 LinkedIn 12 Pin It Share 2 Buffer 9 102 Flares × A few months ago, after a discussion with a friend, I came to the realization that my presentations needed to be a little more visually appealing. Microsoft PowerPoint is a great tool, but it can be a little difficult to figure out and use. My research led me to try Haiku Deck. And let me tell you this: I will never look back! Haiku Deck lets you work from your desktop and smartphone.

Four brands to inspire your content marketing strategy Content marketing is about telling a story that resonates with your audience and finding a relevant channel to deliver it. It’s the loyal followers that then spread the brand message, these days, commonly, but not exclusively, via social media. Well that’s the theory. monochrom Hedonistika 2016 will take place at Cinematheque Holon (near Tel Aviv) as part of Print Screen Festival! Hedonistika is an interactive exhibition of gastronomical robots, cocktail machines, and experimental food performances. Created by artists collective monochrom from Vienna, Hedonistika is a travelling festival which moves from city to city and culinary landscape to culinary landscape, find local curatorial partners and cooperate with local hackers, builders, chemists and food phreaks to present a tour-de-farce of new approaches and discourses. Hedonistika says: don't let us trick ourselves into the absurd belief that organic food and machines are enemies.

Swarmwise – The Tactical Manual To Changing The World. Chapter Two. Launching a swarm is an intense event, where you can get hundreds or thousands of new colleagues in less than a day. You have a very short window for appreciating their interest, or they will take it elsewhere. OK, so you have a provocative idea. You’ve done the math. Everything appears good to go. How do you gather a swarm around the idea?

Category:Systems A system is a set of entities, real or abstract, comprising a whole where each component interacts with or is related to at least one other component and they all serve a common objective. For the purpose of organizing articles into categories, there are four major type of system which can reasonably be expected to contain every type of system under its category tree: Physical systems, Biological systems, Social systems, and Conceptual systems. Subcategories This category has the following 7 subcategories, out of 7 total. Pages in category "Systems" The following 25 pages are in this category, out of 25 total. 25 ways to improve your presentationsBad Language All of us have at some point been bored to tears by a presentation. If you are lucky, you have also been informed, excited and inspired by an outstanding one. If you haven’t there are plenty of good examples on TED. Nobody wants to be a presentation zero. To learn how to be a PowerPoint hero, check out these 25 tips.

mmunism, welfare state – what's the next big idea? Most of the world's people are decent, honest and kind. Most of those who dominate us are inveterate bastards. This is the conclusion I've reached after many years of journalism. Writing on Black Monday, as the British government's full-spectrum attack on the lives of the poor commences, the thought keeps returning to me. "With a most inhuman cruelty, they who have put out the people's eyes reproach them of their blindness."

Six Degrees - CNT 2013 at CSE, IITKgp The social networking sites like Facebook, Friendster and MySpace are essentially complex systems induced by friendship links. These networks are a rich source of personal information populated by the users. So one of the things which could be of interest is discovering clusters or communities within this network. Identifying these communities in social networks help us get insight into the system and helps us understand how network topology and function affect each other. According to me, there is no difference between them. When so much work has been done already in clustering why is still lot of work being done in community detection ??