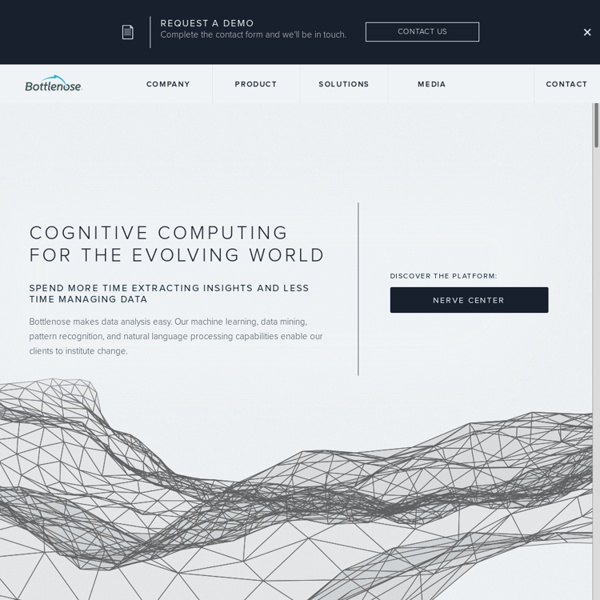 Spotlight trends that matter from overwhelming social noise Visualize emerging trends, mitigate threats, and amplify opportunities in real-time Track how trends start, how long they’ll last, and what fuels them

Alpha Personal Analytics Connect with Faceook, sign in for free, and get unique, personalized information anad analysis on your social data-computed by Wolfram|Alpha Clustering of your friends What are the groups of friends that make up your network? How do these groups relate to each other? Where in the world are your friends? Nova Spivack In 1994 he co-founded EarthWeb, Inc., one of the first Internet companies (IPO: 1998), which later spun off Dice.com (IPO: 2007). He founded Lucid Ventures in 2001 and the semantic web venture Radar Networks in 2003.[1] Nova Spivack writes about the future of the Internet and topics concerning search, social media, personalization, information filtering, entrepreneurship, Web technology and Web applications.[5][6]

Forget Dunbar’s Number, Our Future Is in Scoble’s Number February 16, 2009 by Hutch Carpenter Photo credit: Mark Wallace I probably don’t know about your latest job project. The Most Complete Twitter Application List Available - 2011 Edition I believe this is the best, most complete and accurate list of valuable Twitter applications available on the internet right now. To be fair, I absolutely have merged and plagiarized other older and outdated lists that I found (the larger ones are credited below). However, I spent a good deal of time to clean out the dead applications, delete the apps that were overly quirky or being developed, focus more on the apps that increase productivity, and add in many of the new great apps that have come out over the past six months - particularly in the productivity / business apps section where my primary interest lies.

9 Free Tools For Link Discovery & Content Creation Every day it seems that there’s a new tool out there to monitor, measure, track, and suggest what we should be doing. Many of these are free or offer free trials, which I love, but finding the time to test out a new tool in order to see if it suits you isn’t always easy. My objective in using these tools is, of course, building links, so I’ll go over the tools that I use and show you how I’d use them. And hey, they’re all free!! For the record, I’m not interested in competitive analysis, analyzing sites, using social media (with one notable exception, and my exclusion here is only because that topic has been well covered both on this site and elsewhere) or examining existing backlinks. How to: Build a Social Media Cheat Sheet for Any Topic Let's say you're a butcher, a baker or a candlestick maker. You want to get up to speed on the social media activity in your market, as fast as you can. Or perhaps you want to sell things to candlestick makers online, or you're a journalist writing a story about blogging butchers, or maybe you've got some kind of weird baking fetish or academic interest. Is there any way to ramp up your knowledge of these fields, fast, other than the "Google and wander" method? We think there is. Below you'll find step-by-step instructions, with screen shots, for the process we use when we want to get smart about a new field in a hurry.

The New Social Media Landscape: A Roadmap July 20th, 2011 It may look like Google+ is competing with Facebook and Twitter, but I don’t think that is what will happen in the end. I think Google+ is a very different kind of service and it’s not clear that it can or will, or should, replace these other services. In a series of articles here on my blog, I’ve explained the differences between these services, and what Google+ is really for and what it means for the rest of the social media giants: Gridcosm Gridcosm is a collaborative art project in which artists from around the world contribute images to a compounding series of graphical squares. Each level of Gridcosm is made up of nine square images arranged into a 3x3 grid. The middle image is a one-third size version of the previous level. Artists add images around that center image until a new 3x3 grid is completed, then that level itself shrinks and becomes the "seed" for the next level. This process creates an ever expanding tunnel of images, the newest level a direct result of the previous level which is a result of the previous level... and so on.

The CIA Open Source Center Tracks the Pulse of the World Through Facebook & Twitter The U.S. Central Intelligence Agency has a crack group of analysts tracking the Internet, including tweets and Facebook messages, that takes the pulse of the world. Located in McLean, Virginia analysts at the CIA Open Source Center are known as the "vengeful librarians" according to a report from the Associated Press. These librarians are tracking up to five million tweets a day from places like China, Pakistan and Egypt.

Internet Marketing Strategy based on Audience Analysis Let me tell you a story… Imagine a place: Middle East You see ocher landscapes in the distance, few palm trees around an oasis and a hill with a castle on top of it. Idyllic, isn’t it? No, it is not idyllic. Free Online Network Tools Network Tools Using these tools you can find information about an IP address or hostname, including country, state or province, city, name of the network provider, administrator, etc. SmartWhois, TraceRoute, Ping, NsLookup, Proxy Test, Bandwidth Meter, Environmental Variables Test, Domain Check, Blacklist Check, TCP Query