The Australian. You have cookies turned off To use this website, cookies must be enabled in your browser. To enable cookies, follow the instructions for your browser below. Facebook App: Open links in External Browser There is a specific issue with the Facebook in-app browser intermittently making requests to websites without cookies that had previously been set. This appears to be a defect in the browser which should be addressed soon. Sydney, Melbourne house prices: Suburbs littered with empty apartments. DESPERATE landlords are having to slash rents to get citydwellers to move into their properties as new data shows our cities are littered with empty homes. 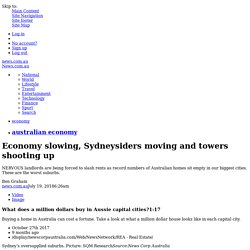 While there’s a mixed picture for Melbourne and Brisbane, Sydney has just recorded its highest vacancy rate in at least 13 years — as SQM Research figures now show 2.8 per cent of the city’s units and houses are sitting unoccupied. And they say it’s only going to get worse in the coming months. That adds up to 19,572 residential rental dwellings estimated to be sitting vacant and available for rent, and experts say it could signal a dramatic slowdown in the city’s economy. The Australian. World Population Day: How ‘megacities’ are expanding. THE incredible expansion of the world’s major cities has been highlighted in compelling images shot over the last three decades. 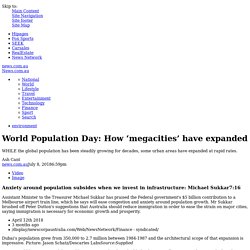 The maps, published by news.com.au for United Nations World Population Day, aims to highlight the importance of global population and the increasing demand for urban expansion. The current world population sits at 7.6 billion, with China, India and the United States being the three most populous countries. Australia sits at 54 on the list with 24.7 million people, but the national population is expected to hit 25 million this August, a milestone that wasn’t projected until 2051. Chinese investors now after smaller, higher-quality real estate in Australia: report. Chinese investors and developers are targeting smaller, higher-quality real estate assets in Australia in response to Beijing’s recent restrictions on capital outflows, says a report by KPMG and the University of Sydney. 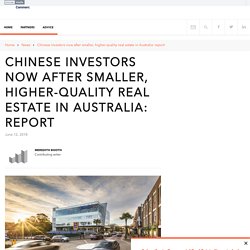 Tighter control of overseas direct investments and deal-approval regulations saw Australia’s share of China’s global spend fall 11 per cent to $US10.3 billion ($13.5b) in 2017, faring better than the United States (down 35 per cent) and Europe (down 17 per cent) in the year. Australian commercial real estate was second only to mining in popularity for Chinese buyers, attracting one-third of all Chinese investment in Australia, worth $4.4b, or 11.5 per cent of China’s total spending on real estate globally, says the report Demystifying Chinese Investment in Australia, which was released on Tuesday.

While deal numbers were steady, the value of investments in the real estate sector fell 22 per cent from 2016. Camden council challenges family’s right to keep cabin on wheels in their backyard. Property sizes, prices in Australia: Has ‘home ownership’ dream changed? AUSSIES have long aspired to owning a house on a large plot, yet that dream is all but gone in our cities. 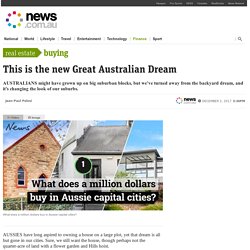 Sure, we still want the house, though perhaps not the quarter-acre of land with a flower garden and Hills hoist. Of course, high property prices have played a role in this change, but so too have modern zoning rules and a general desire to be more efficient with what we have. Look around — the result has been bigger houses on smaller plots. And it’s not just that the houses are bigger than the red-bricks and bungalows of previous eras, they also extend to the boundaries of suburban plots to eliminate the traditional front yard. How retirees are changing Sydney's economic power balance. The distribution of economic power in our biggest cities is shifting as the baby-boomer generation moves into retirement. 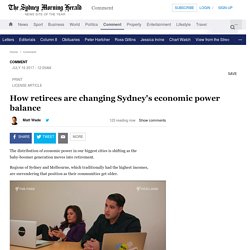 Regions of Sydney and Melbourne, which traditionally had the highest incomes, are surrendering that position as their communities get older. This is a modal window. Premier Gladys Berejiklian announces housing affordability reforms. First home buyers will be helped into the property market with more than $1 billion of stamp duty concessions and measures to level the playing field with investors under reforms unveiled by Premier Gladys Berejiklian to tackle housing affordability. 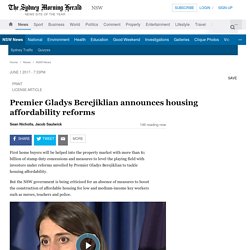 But the NSW government is being criticised for an absence of measures to boost the construction of affordable housing for low and medium-income key workers such as nurses, teachers and police. This is a modal window. This modal can be closed by pressing the Escape key or activating the close button. Gosford now the most affordable spot in Greater Sydney for first home buyers. The most affordable spot for Sydneysiders looking to buy their first home is so far from the city it barely counts as Sydney at all. 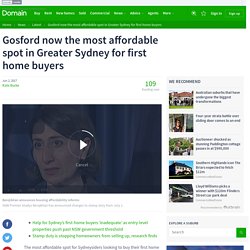 Gosford, 65 kilometres from Sydney’s centre, on the Central Coast and the cusp of the Greater Sydney, is the cheapest area for first time buyers. Domain Group’s First Home Buyers Report, released on Friday, deemed just 11 suburbs “affordable” – under $459,010 – based on the average New South Wales first home buyer loan size in the 12 months to March in addition to a 20 per cent deposit. This two-bedroom townhouse sold in May for $410,000 – just short of Gosford’s median house price of $412,500.

Photo: Supplied. If you include the $10,000 boost from the First Home Owner Grant for new properties an extra six suburbs are rendered affordable – 17 in total. How China's real estate bubble pushes up prices in Sydney. It didn't seem a hotbed of revolutionary anger. 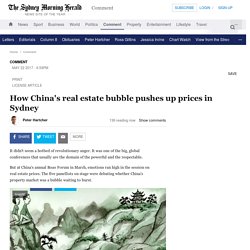 It was one of the big, global conferences that usually are the domain of the powerful and the respectable. But at China's annual Boao Forum in March, emotions ran high in the session on real estate prices. Sydney, Melbourne property prices: Regional centres new inner city as buyers look further out. Gosford city centre on the NSW Central Coast. 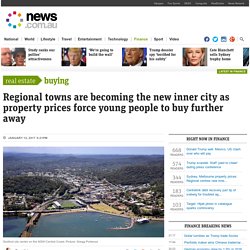 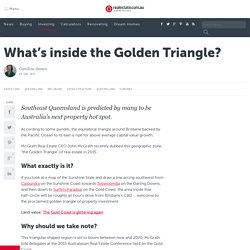 According to some pundits, the equilateral triangle around Brisbane backed by the Pacific Ocean to its east is ripe for above average capital value growth. Working from home could kill off cities as we know them. Imagine if you didn’t have to battle other commuters to make it here every day? Picture: Mark Stewart MANY companies are releasing technology to make working from home easy. If you find one that works, pay very close attention. How Sydney's planners are using the 'Latte Line' to try and reshape the city. They're calling it the Latte Line. Or perhaps the Goats Cheese Line. Whatever the cliché, a hypothetical boundary drawn on the diagonal between Sydney Airport, Parramatta and Sydney's north-western suburbs has become the guiding principle in planning the city's future.

This is a modal window. This modal can be closed by pressing the Escape key or activating the close button. Nbn - Australia's new broadband network. Federal budget 2016: Top earners benefit most from negative gearing, Grattan Institute finds. Chinese investments in Australian property doubles as FIRB real estate approvals overall jump 75 per cent. New York style apartments in Sydney, Melbourne and Brisbane: Buying off the plan. Trendy inner city apartment buildings like Duo at Central Park now boast features like communal outdoor areas. NEW York-style apartments are popping up in our inner city suburbs as often as trendy cafes. Ghost houses: Negative gearing causing artificial shortage, University of Sydney researchers claim. Investors are snapping up Sydney homes and leaving them empty. Building Supertowns: Going Regional. Despite the size of our country and the prevailing romance of the bush, according to the Australian Bureau of Statistics we’re a very urbanised country.