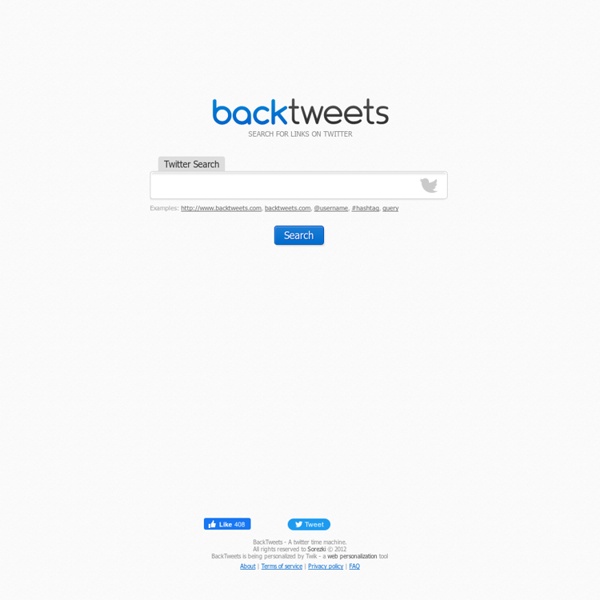 Top 10 Most Popular Languages on Twitter [CHART] While English is the most popular language on Twitter, it may surprise you that the majority of published tweets are not in the mother tongue of the company's founders. Just over one-third (34%) of all tweets were in English in September. With 16%, Japanese is the second-most popular language on the microblogging network, while Spanish clocks in at third place. Search Twitter users by Location and Bio and Create Twitter Lists: LocaFollow Search and filter options allowing you to find people to follow depending on location, influence, number of followers, how active users are on Twitter and many more! Find the most beneficial people to target so that you can grow and increase the quality of your Twitter community. Find out your best time to tweet, discover the interests of a custom sample of users and endless extra features! To find out more about our product

30 Very Useful Twitter Tools You Must Be Aware Of There are numerous ways of using Twitter for everything from business to fun. The key to using Twitter effectively is the use of tools. Without tools, Twitter can be overwhelming and difficult to fathom. 50 Free and Exclusive Twitter Icons Today we bring you a set of 50 free and exclusive Twitter icons that you can use for your websites. The icons are provided in both raster and vector formats: The transparent PNG versions are 256×256, and we have also included Illustrator files so that you can resize the icons as needed. The icons are completely free for personal and commercial use and they’re being released exclusively to all our readers. If you’d like to share these icons, please refer your friends to this page so that they can download their copy from here.

Social Media Monitoring and Analysis with SM2 from Techrigy (Alterian SM2) Do you know the process your customers take to buy and connect with you? Their journey is often filled with many steps, stops and starts. What you do to help them along the way makes all the difference in gaining a competitive foothold. Taking action to improve the experiences your customers have within that journey can convert them from shoppers to customers, and then to advocates. Too often customers don’t ask for what they want, and rarely do they behave in the way you expect them to; however, they are telling others directly in social media. Taking a walk in your customer’s shoes isn’t necessarily a walk in the park, but it can provide a rich and contextual view into exactly where the customer is in their journey.

Twitter Testing Major Profile Redesign That Looks a Lot Like Facebook Twitter is testing a major profile redesign that's very reminiscent of Facebook and Google+. Mashable assistant features editor Matt Petronzio spotted on Tuesday a huge update to his Twitter profile page, with the main picture and bio scaled to the left and significantly more real estate dedicated to the header photo. The revamped tweet stream is also a departure from its signature look. There is a greater focus on photos and content cards. Sign Up Twitter spam is a drag. What if you could know for sure that your followers are truly human, and not some bot? TrueTwit is designed to help you: Verify people from robots Avoid Twitter spam Save time managing your followers There are two versions: TrueTwit Premium TrueTwit Premium builds on the follower management in TrueTwit Basic by doing an in-depth, automated analysis of your followers and their tweets, and has the following features: No direct messaging of new followers. Access to our Follower Analysis page which summarizes the status of your followers. Free 30-day, no obligation trial. After that, a subscription is only $20.00 per year.

That Can Be My Next Tweet: Generate Tweets Based On Existing Ones - Flock That Can Be My Next Tweet, as the name suggests, helps you generate Twitter status messages. It scans through your existing tweets and generates random messages by combining the words and phrases it finds relevant. You need to enter your Twitter username and click on “get your next tweet” to get the tweet. You may also post it to Twitter directly by hitting the corresponding button. The machine generated tweets, as you would expect, might not make sense (actually it doesn’t most of the time). Most Wanted Twitter Hacks and Plugins for WordPress Looking to harness the full power of Twitter to drive traffic to your WordPress site? When used effectively, Twitter can help you find new users, expand your content reach, and bring traffic to your site. In this article, we will show you the most wanted Twitter hacks and plugins for WordPress. 1. Floating Social Bar Floating social bar adds social buttons on top of your content including Twitter’s tweet button.