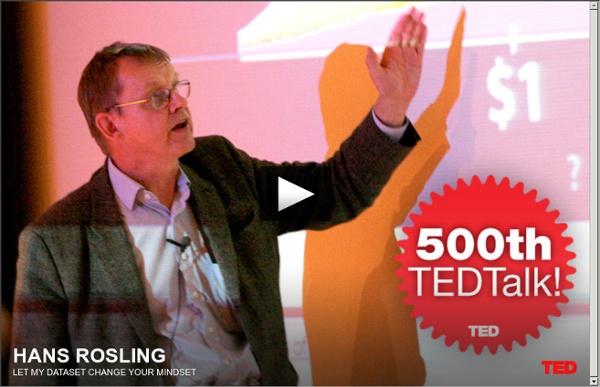 The Joy of Stats About the video Hans Rosling says there’s nothing boring about stats, and then goes on to prove it. A one-hour long documentary produced by Wingspan Productions and broadcast by BBC, 2010. China's middle-class boom - Jun. 26 Since 1980, yearly earnings for an average Chinese household multiplied ten times over. NEW YORK (CNNMoney) -- As China's economy has exploded over the last 30 years, so too have the incomes and living standards of average Chinese people. The average disposable income of urban Chinese households rose to around $3,000 per capita in 2010, according to an analysis of official government statistics by China Market Research Group.

Professor's TEDx Talk Shares Why We Need Teachers I was messaged on Twitter the other day by Professor Gustavo Reis . In his TEDx talk, he discusses the importance of education and, more importantly, the need for engaged students. Below are a few takeaways from the video that I found particularly interesting. NOTE: the video is subtitled. How Students Pay Attention In Class Think Again: War - By Joshua S. Goldstein "The World Is a More Violent Place Than It Used to Be." No way. The early 21st century seems awash in wars: the conflicts in Afghanistan and Iraq, street battles in Somalia, Islamist insurgencies in Pakistan, massacres in the Congo, genocidal campaigns in Sudan. All in all, regular fighting is taking place in 18 wars around the globe today.

Desktop This software has been renamed to Gapminder World Offline Because of technical problems the software on this page is no longer being maintained! Please visit Gapminder World Offline (Beta) instead. Gapminder Desktop With Gapminder Desktop you can show animated statistics from your own laptop! Install the free software and watch the how-to video with Hans Rosling. Economy of India The independence-era Indian economy (from 1947 to 1991) was based on a mixed economy combining features of capitalism and socialism, resulting in an inward-looking, interventionist policies and import-substituting economy that failed to take advantage of the post-war expansion of trade.[21] This model contributed to widespread inefficiencies and corruption, and the failings of this system were due largely to its poor implementation.[21] In 1991, India adopted liberal and free-market principles and liberalised its economy to international trade under the guidance of Former Finance minister Manmohan Singh under the Prime Ministrship of P.V.Narasimha Rao, who had eliminated Licence Raj, a pre- and post-British era mechanism of strict government controls on setting up new industry. Overview[edit] The combination of protectionist, import-substitution, and Fabian social democratic-inspired policies governed India for sometime after the end of British occupation.

United Nations report: Internet access is a human right Internet access is a human right, according to a United Nations report released on Friday. "Given that the Internet has become an indispensable tool for realizing a range of human rights, combating inequality, and accelerating development and human progress, ensuring universal access to the Internet should be a priority for all states," said the report from Frank La Rue, a special rapporteur to the United Nations, who wrote the document "on the promotion and protection of the right to freedom of opinion and expression." La Rue said in his report that access to the Internet is particularly important during times of political unrest, as demonstrated by the recent "Arab Spring" uprisings in Tunisia and Egypt, among other countries. From the report: DOCUMENT: Read the United Nations report

Human rights & democracy statistics About this Video In this video, made for the Oslo freedom Forum 2009, Hans Rosling discuss the difficulty in measuring progress in Human Rights in the form of comparable numerical statistics. He also shows the surprisingly weak correlation between existing estimates for democracy and socio-economic progress. The reason may be that democracy and human rights measurements are badly done. It may also be that democracy and human rights are dimensions of development that are in themselves difficult to assign numerical values. But it also seems as much improvement in health, economy and education can be achieved with modest degrees of human rights and democracy.

Watch 10 seconds of high-frequency stock trading in super slow motion Presumably, it will take them a bit of time to actually read out the resolution. How do you know there weren't computers executing the trade before the news reached Chicago? Maybe they were measuring the probability that the decision would be made. In addition, a spike in trading could be bets placed both ways. There could be short options bought or long.

What My Dog Can Teach Us About Managing 1:1 Classrooms I have two dogs, Morrison and Max. Morrison is my older dog, he's between ten and thirteen years old. Morrison was an adult when I adopted him and he's never gotten into trouble when left alone in the house. Max is my younger dog, he's two years old. I adopted Max six months ago. UNESCO The flag of UNESCO. The United Nations Educational, Scientific and Cultural Organization (French: Organisation des Nations unies pour l'éducation, la science et la culture; UNESCO; /juːˈnɛskoʊ/) is a specialized agency of the United Nations (UN). UNESCO has 195 member states[2] and nine associate members.[3][4] Most of the field offices are "cluster" offices covering three or more countries; there are also national and regional offices. UNESCO pursue its objectives through five major programs: education, natural sciences, social and human sciences, culture, and communication and information. UNESCO's aim is "to contribute to the building of peace, the eradication of poverty, sustainable development and intercultural dialogue through education, the sciences, culture, communication and information".[6]

The Freight Train That Is Android March 24, 2011: March 24, 2011: [Follow Me on Twitter] “People get ready, there’s a train a comin’” - The Impressions From Zacks via Yahoo: Mark Vickery, On Thursday March 24, 2011, 4:58 pm EDT “BlackBerry maker Research In Motion (NasdaqGS: RIMM – News) beat its fiscal 4Q EPS estimates by 2 cents per share, but missed slightly on quarterly revenues and offered guidance well below the current consensus. This has sent RIMM shares down nearly 10% in after-market trading…”

Google’s iron grip on Android: Controlling open source by any means necessary Six years ago, in November 2007, the Android Open Source Project (AOSP) was announced. The original iPhone came out just a few months earlier, capturing people's imaginations and ushering in the modern smartphone era. While Google was an app partner for the original iPhone, it could see what a future of unchecked iPhone competition would be like. Vic Gundotra, recalling Andy Rubin's initial pitch for Android, stated: He argued that if Google did not act, we faced a Draconian future, a future where one man, one company, one device, one carrier would be our only choice.