Special: Seek and Ye Shall Find 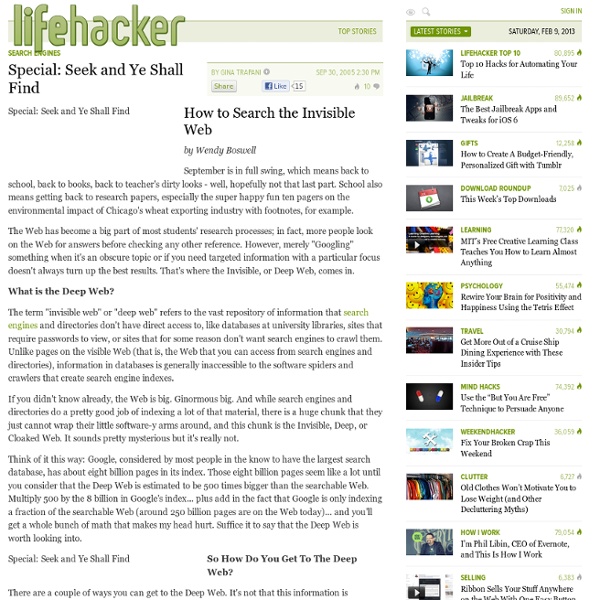 by Wendy Boswell September is in full swing, which means back to school, back to books, back to teacher's dirty looks - well, hopefully not that last part. School also means getting back to research papers, especially the super happy fun ten pagers on the environmental impact of Chicago's wheat exporting industry with footnotes, for example. The Web has become a big part of most students' research processes; in fact, more people look on the Web for answers before checking any other reference. However, merely "Googling" something when it's an obscure topic or if you need targeted information with a particular focus doesn't always turn up the best results. That's where the Invisible, or Deep Web, comes in.

The 6 Most Badass Skills You Can Learn in Under a Week Become a Human Lie Detector Any secret agent worth his hidden cyanide pills is going to have to be prepared for intense negotiations. Whether you've captured a deadly SPECTRE double-agent working as an MI6 janitor, or are just buying a used car, you've got to be able to tell when the enemy is lying through his teeth to you, and how to best disguise the fact that you're lying through your teeth at the same time. CatScan Output from article search CatScan is an external tool that searches an article category (and its subcategories) according to specified criteria to find articles, stubs, images, and categories. It can also be used for finding all articles that belong to two specified categories (the intersection).

How to Watch Blocked Internet Videos « Broken Secrets September 27, 2010 at 5:00 am Chad Upton By Chad Upton | Editor The internet is a great place to catch TV shows and clips that you or your PVR missed. Unfortunately, a lot of websites only allow their video content to be viewed in their service area. It’s not because they’re mean, they may have contracts that prevent them from distributing outside their area, not to mention cost savings reasons. That’s right, it’s expensive to stream video over the internet to thousands or hundreds of thousands of people in a reliable way.

How to Get a Used-Car Warranty (and Not Get Screwed) (Photo by fotog/Getty Images) It's Eric Anderson's job to know how much it costs you to own a car. And number-crunchers like Anderson, a senior analyst at IntelliChoice, know more than they ever have before—thanks partly to the proliferation of certified preowned (CPO) programs that nearly every carmaker in America now offers. These programs offer extended service contracts as part of the package when you buy a used car, which means, among other things, that all the repairs are tracked—and tracked in the same way that repairs done under new-car warranties are. Anderson's math helps guide IntelliChoice's Best Overall Value of the Year Awards.

Salt and Vinegar: Nature's Rust Remover June 5th, 2014 in blogs Email 139 users recommend Salt, vinegar, baking soda, alcohol: the ingredients for a like-new plane. Here is the Stanley 220 standard block plane laying halfway in the vinegar and salt bath. laundry.reviewed Jeans were originally designed to withstand the rigors of the blue-collar workday, but in today’s society, they’re also high fashion. That means you need to treat your Levis like Versace if you want them to keep on looking their best. And the best way to do that is to keep your denim out of the washer and dryer. While efficient, these devices will eventually ruin your costly clothes. If you've invested in some premium denim, follow these four tips to get the most out of your beloved bottoms. Soak your denim in vinegar.

Removing Old Wallpaper If you have a previously papered surface, you should strip the wallpaper. This may even be essential depending on what kind of wallpaper you currently have and how you want to refinish the walls. Even so, there are some conditions under which you may decide not to remove existing wallpaper. You can safely paper over a single layer of smooth, well-adhered wallpaper if it is free of bubbles, buckles and wrinkles. Impact tarp Loose Layers wins the day - a heavy duty tarp (from Fleet Farm, or where ever) will get a hole in it eventually - but it makes a good back layer - you can pull the sides towards the golfer also so the stray shots get contained. then just hang an ordinary blanket in front of the tarp itself - leave a gap between the layers. Don't let the bottom of the blanket touch the ground, don't tie off the sides, just hang from the top only - it gathers shots more softly that way and is less stress on the blanket. the soft blanket holds up better, is very quiet, and really hard shots will push back to the tarp also to help the blanket gather the ball in

How to Be More Productive and Eliminate Time-Wasting Activities by Using the 'Eisenhower Box'  Dwight Eisenhower lived one of the most productive lives you can imagine. Eisenhower was the 34th president of the United States, serving two terms from 1953 to 1961. During his time in office, he launched programs that directly led to the development of the Interstate Highway System in the United States, the launch of the Internet (DARPA), the exploration of space (NASA), and the peaceful use of alternative energy sources (Atomic Energy Act). Before becoming president, Eisenhower was a five-star general in the United States Army, served as the Supreme Commander of the Allied Forces in Europe during World War II, and was responsible for planning and executing invasions of North Africa, France, and Germany. At other points along the way, he served as President of Columbia University, became the first Supreme Commander of NATO, and somehow found time to pursue hobbies like golfing and oil painting.

lifehack The human mind is truly incredible, and we should all strive towards creating a tenacious memory we can rely on. Many lucrative professions or hobbies require such a trait—actors, musicians, artists and entertainers in general do countless drills, just so the required information can be embedded in the memory with certainty. Clearly numerous doors that lead to a successful future are unlocked if one has a great memory. Although beneficial, it is not an essential ingredient within the success formula—what you lack in memory can always be compensated with diligence. Keeping track of crucial elements in your life through list-making is still an unrivaled tactic for counterbalancing feeble recollection. How to Tie Good Knots You don't need a sailing to learn useful knots; these are four of our favorites. The double bowline knot, used here to suspend mason jars and votives, creates a strong loop at the end of a line. When I was younger, my parents took me camping all the time. So at a tender age, I was aware of how to coax flames out of a fire (paper plate fan), catch frogs in the dark, and set up a tent. These days, I probably wouldn't survive overnight, considering I'm all thumbs when it comes to tying a strong knot—skill #1 for setting up a tent that doesn't collapse on you overnight. And that got me thinking that I should actually learn how to tie some good ones!