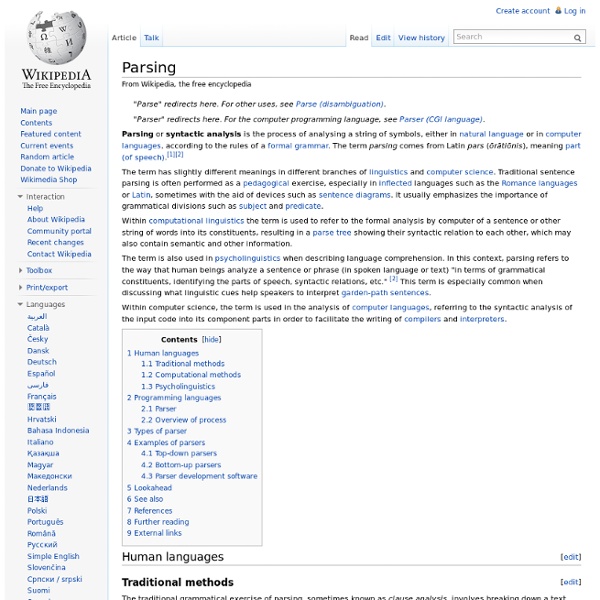 Within computational linguistics the term is used to refer to the formal analysis by a computer of a sentence or other string of words into its constituents, resulting in a parse tree showing their syntactic relation to each other, which may also contain semantic and other information. The term is also used in psycholinguistics when describing language comprehension. In this context, parsing refers to the way that human beings analyze a sentence or phrase (in spoken language or text) "in terms of grammatical constituents, identifying the parts of speech, syntactic relations, etc." [2] This term is especially common when discussing what linguistic cues help speakers to interpret garden-path sentences. Human languages[edit] Traditional methods[edit] Parsing was formerly central to the teaching of grammar throughout the English-speaking world, and widely regarded as basic to the use and understanding of written language. Computational methods[edit] Psycholinguistics[edit] Parser[edit] Related:  Text Analytics • Perl • avril 2014

The Stanford NLP (Natural Language Processing) Group About | Citing | Questions | Download | Included Tools | Extensions | Release history | Sample output | Online | FAQ A natural language parser is a program that works out the grammatical structure of sentences, for instance, which groups of words go together (as "phrases") and which words are the subject or object of a verb. Probabilistic parsers use knowledge of language gained from hand-parsed sentences to try to produce the most likely analysis of new sentences. These statistical parsers still make some mistakes, but commonly work rather well. Their development was one of the biggest breakthroughs in natural language processing in the 1990s. Package contents This package is a Java implementation of probabilistic natural language parsers, both highly optimized PCFG and lexicalized dependency parsers, and a lexicalized PCFG parser. As well as providing an English parser, the parser can be and has been adapted to work with other languages. Shift-reduce constituency parser Usage notes Java

Lesson 6 - Tuples, Lists, and Dictionaries Introduction Your brain still hurting from the last lesson? Never worry, this one will require a little less thought. Think about it - variables store one bit of information. But what if you need to store a long list of information, which doesn't change over time? The Solution - Lists, Tuples, and Dictionaries For these three problems, Python uses three different solutions - Tuples, lists, and dictionaries: Lists are what they seem - a list of values. Tuples Tuples are pretty easy to make. Code Example 1 - creating a tuple months = ('January','February','March','April','May','June',\ 'July','August','September','October','November',' December') Note that the '\' thingy at the end of sthurlow.comthe first line carries over that line of code to the next line. Python then organises those values in a handy, numbered index - starting from zero, in the order that you entered them in. Table 1 - tuple indicies And that is tuples! Lists Lists are extremely similar to tuples. Clears things up?

Zipf's law Zipf's law /ˈzɪf/, an empirical law formulated using mathematical statistics, refers to the fact that many types of data studied in the physical and social sciences can be approximated with a Zipfian distribution, one of a family of related discrete power law probability distributions. The law is named after the American linguist George Kingsley Zipf (1902–1950), who first proposed it (Zipf 1935, 1949), though the French stenographer Jean-Baptiste Estoup (1868–1950) appears to have noticed the regularity before Zipf.[1] It was also noted in 1913 by German physicist Felix Auerbach[2] (1856–1933). Motivation[edit] Zipf's law states that given some corpus of natural language utterances, the frequency of any word is inversely proportional to its rank in the frequency table. Thus the most frequent word will occur approximately twice as often as the second most frequent word, three times as often as the third most frequent word, etc. Theoretical review[edit] Formally, let: Related laws[edit]

BigSee < Main < WikiTADA This page is for the SHARCNET and TAPoR text visualization project. Note that it is a work in progress as this is an ongoing project. At the University of Alberta we picked up the project and gave a paper at the Chicago Colloquium on Digital Humanities and Computer Science with the title | The Big See: Large Scale Visualization. The Big See is an experiment in high performance text visualization. We are looking at how a text or corpus of texts could be represented if processing and the resolution of the display were not an issue. Most text visualizations, like word clouds and distribution graphs, are designed for the personal computer screen. Project Goals This project imagines possible paradigms for the visual representation of a text that could scale up to very high resolution displays (data walls), 3D displays, and animated displays. Participants Geoffrey Rockwell is a Professor of Philosophy and Humanities Computing at the University of Alberta. Collocation Graphs in 3D Space Research

blogs.perl.org — blogging the onion Organization theory (Castells) The theory of the Information Age is deeply rooted in organization theory. This may come as a surprise since Manuel Castells is perhaps more readily associated with either the study of the Internet, cities and regions, or social movements. There are two points to be made about the parallels with organization theory. Network researchers (see social networks) do not seem to have adopted Castells’ framework. 1. 2. 3. 4. Semantic Search Engine and Text Analysis