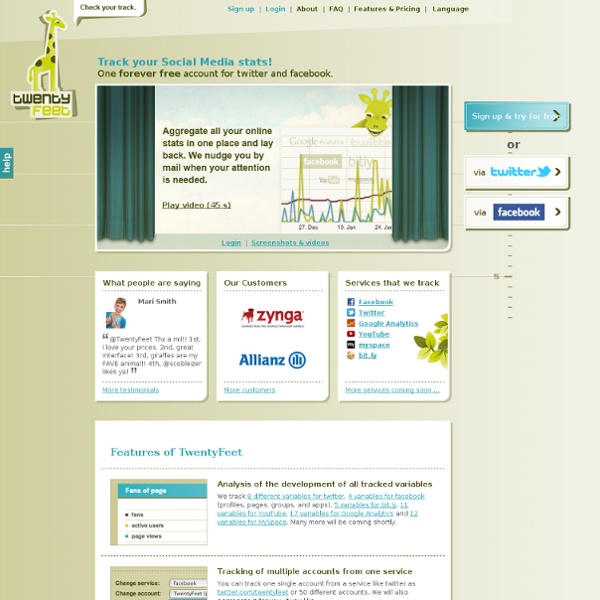 How To Backup Your Twitter Archive With the Twitter fail whale popping up all the time, you never know when something tragic might happen. No one want to lose all of their Twitter tweets, followers, or anything else for that matter. That’s why it’s a good idea to backup your Twitter archive on a regular basis in case of a Twitter mishap. As we all know, there has been numerous times in the past where users have lost followers, tweets, and DMs. Tweet Adder Review and Bonus Get Thousands of Followers with the Twitter Marketing Software Tweet Adder This review of Tweet Adder explains why this Twitter marketing software is hands down the best Twitter automation program on the market. I have been able to get well over 300,000 followers for myself and the clients I have worked with largely thanks to the fact that I have used Tweet Adder on a daily basis and shared high quality content as I grew my network.

SocialBro Adds A Free Plan For Twitter Analytics & Management Twitter management platform SocialBro is now free — if you have fewer than 5,000 Twitter contacts. The London-based startup, fresh off its newly minted status as a Twitter Certified Partner, is offering the “Free Cloud” plan to introduce startups and small businesses to its dashboard. The plan is available to users with a Twitter community of 5,000 or below. The SocialBro platform works alongside Twitter publishing clients and offers HootSuite integration. A Useful Social Media Cheat Sheet If you’re looking for a straightforward no-frills guide that breaks down the details of some of the most popular social networks, look no further. This social media cheat sheet covers most of the big names you’re probably aware of … but it’s not perfect. The infographic from Flowtown showcases Twitter, Facebook, Youtube, Google+, Tumblr, and … Digg.

10 Top Twitter Tools Suggested By the Pros Yes, there are a ton of great Twitter Tools out there for you, but which ones should you pick? I thought one of the best ways to narrow your choice down is to get in touch with the real Social Media experts. I sent them an email and asked them about their recommended Tools for you. So here are the top 10 responses from the Twitter Pros out there. I hope some of these tools will be useful for you too: Mari Smith's Top Tool: ManageFlitter

10 Awesome Twitter Analytics and Visualization Tools Recently Twitter rolled out their native analytics platform for all users and now you can get some quality data about your tweets directly from Twitter. After researching over a thousand Twitter Tools for the Twitter Tools Book I came across many Twitter analytics and visualization tools. These Twitter tools were designed to add value by presenting a different way to visualize or analyze your tweets, the people in your network, and the tweets from the people in your network. Sign Up Twitter spam is a drag. What if you could know for sure that your followers are truly human, and not some bot? TrueTwit is designed to help you: Verify people from robots Avoid Twitter spam Save time managing your followers There are two versions: TrueTwit Premium TrueTwit Premium builds on the follower management in TrueTwit Basic by doing an in-depth, automated analysis of your followers and their tweets, and has the following features: No direct messaging of new followers. Access to our Follower Analysis page which summarizes the status of your followers. Free 30-day, no obligation trial. After that, a subscription is only $20.00 per year.

8 Excellent Twitter Analytics Tools to Extract Insights from Twitter Streams Twitter is now the third most popular social network, behind Facebook and MySpace (Compete, 2009). A year ago, it has over a million users and 200,000 active monthly users sending over 3 million updates per day (TechCrunch, 2008). Those figures have almost certainly increased since then. With the torrential streams of Twitter updates (or tweets), there's an emerging demand to sieve signals from noises and harvest useful information.

Five Types of Social Media Influencers What makes a good influencer? “Influence” is a concept difficult to evaluate since it refers to both subjective and objective values, resulting in a measurement of: commercial and financial success reputation and credibility quality of affiliations and contacts charisma and the impact of personality For each of these values, the notion of influence may vary from person to person.