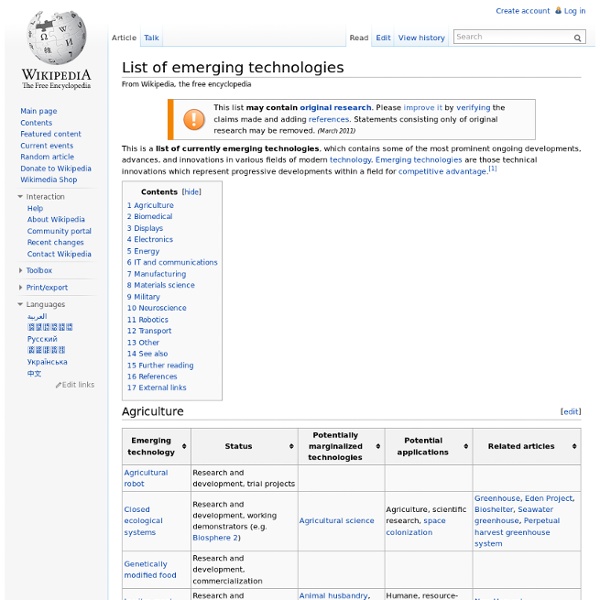 Global Trends 2030: Alternative Worlds Dear Reader: Global Trends 2030: Alternative Worlds is the th installment in the National IntelligenceCouncil’s series aimed at providing a ramework or thinking about the uture. Jeff Han and Phil Davidson Video Perceptive Pixel is a startup founded by Jeff Han. Working all but alone from his hardware-strewn office, Jeff Han is about to change the face of computing. Not even the big boys are likely to catch him.

10 Incredible Cutting-Edge Technologies In Development Technology Don’t give up on flying cars or hoverboards just yet! As technology marches relentlessly on, everything goes into development sooner or later—as demonstrated by the existence of these things, which we’ll almost certainly see within our lifetimes.

Emergent Properties First published Tue Sep 24, 2002; substantive revision Tue Feb 28, 2012 Emergence is a notorious philosophical term of art. A variety of theorists have appropriated it for their purposes ever since George Henry Lewes gave it a philosophical sense in his 1875 Problems of Life and Mind. We might roughly characterize the shared meaning thus: emergent entities (properties or substances) ‘arise’ out of more fundamental entities and yet are ‘novel’ or ‘irreducible’ with respect to them. (For example, it is sometimes said that consciousness is an emergent property of the brain.) CIA - The World Factbook People from nearly every country share information with CIA, and new individuals contact us daily. If you have information you think might interest CIA due to our foreign intelligence collection mission, there are many ways to reach us. If you know of an imminent threat to a location inside the U.S., immediately contact your local law enforcement or FBI Field Office. For threats outside the U.S., contact CIA or go to a U.S. Embassy or Consulate and ask for the information to be passed to a U.S. official. Please know, CIA does not engage in law enforcement.

8 Ways Magnetic Levitation Could Shape the Future - How Maglev Technology Works For years, NASA has been researching the possibility of using the high speeds of maglev transportation to fling spacecraft into low Earth orbit. "It would really open up space to human exploration and commercialization," Powell says. "It's something we can't do now because it's too expensive." Powell and his colleagues have proposed two generations of space launching technology. The first is a cargo-only launch track that could be built into a mountainside to reach a height of 20,000 feet. Magnets could allow a spacecraft traveling along the track to reach speeds around 18,000 miles per hour—enough to fly into space.

Technologies that will Change the World by 2020 Fourteen innovators describe the technological forces that will shape the world by decade's end. Fulvia Montresor | World Economic Forum The World Economic Forum recently asked the incoming members of its 2015 class of Technology Pioneers to share their thoughts on how technology will change the world by the end of this decade. From printable organs to the “Internet of everywhere”, here are their predictions for our near-term future. Emergence In philosophy, systems theory, science, and art, emergence is a process whereby larger entities, patterns, and regularities arise through interactions among smaller or simpler entities that themselves do not exhibit such properties. Emergence is central in theories of integrative levels and of complex systems. For instance, the phenomenon life as studied in biology is commonly perceived as an emergent property of interacting molecules as studied in chemistry, whose phenomena reflect interactions among elementary particles, modeled in particle physics, that at such higher mass—via substantial conglomeration—exhibit motion as modeled in gravitational physics. Neurobiological phenomena are often presumed to suffice as the underlying basis of psychological phenomena, whereby economic phenomena are in turn presumed to principally emerge. In philosophy, emergence typically refers to emergentism.

Clarke's three laws Clarke's Three Laws are three "laws" of prediction formulated by the British science fiction writer Arthur C. Clarke. They are: When a distinguished but elderly scientist states that something is possible, he is almost certainly right. When he states that something is impossible, he is very probably wrong.The only way of discovering the limits of the possible is to venture a little way past them into the impossible.Any sufficiently advanced technology is indistinguishable from magic. Origins[edit]

Bento Laptop Tablet Hybrid by René Woo-Ram Lee Bento is quite an exceptional and forward thinking concept by René Woo-Ram Lee. It’s quite a plausible scenario that most of use/own a tablet, a PC, external hard drives and a smartphone. Now combine the power of these to have fully customizable Bento Laptop!