Advantages of RFID Versus Barcodes. What is RFID? RFID stands for Radio Frequency IDentification, a technology that uses tiny computer chips smaller than a grain of sand to track items at a distance. 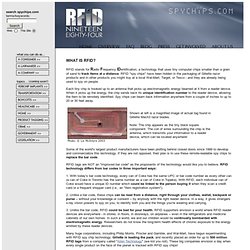 RFID "spy chips" have been hidden in the packaging of Gillette razor products and in other products you might buy at a local Wal-Mart, Target, or Tesco - and they are already being used to spy on people. Each tiny chip is hooked up to an antenna that picks up electromagnetic energy beamed at it from a reader device. When it picks up the energy, the chip sends back its unique identification number to the reader device, allowing the item to be remotely identified.

Spy chips can beam back information anywhere from a couple of inches to up to 20 or 30 feet away. Some of the world's largest product manufacturers have been plotting behind closed doors since 1999 to develop and commercialize this technology. RFID tags are NOT an "improved bar code" as the proponents of the technology would like you to believe. 1. 2. 3. 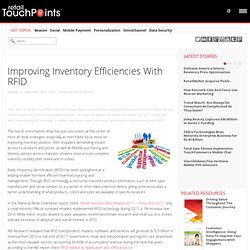 This section will spotlight how best-in-class retailers such as J. C. Penney and Macy’s are leveraging RFID technology. In addition, retail industry experts and analysts will comment on the potential growth of RFID. The rise of omnichannel retail has put consumers at the center of most all retail strategies, especially as merchants focus more on improving inventory position. Radio frequency identification (RFID) has been spotlighted as a leading enabler for more efficient inventory tracking and management. In the National Retail Federation report, titled: “Retail Horizons: Benchmarks 2011 — Forecasts 2012,” only a small minority (9%) of surveyed retailers implemented RFID technology during 2011, a 1% increase over 2010. 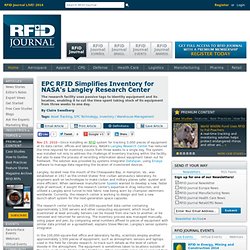 The system was installed not only to address the challenge of inventory tracking within the facility, but also to ease the process of recording information about equipment taken out for fieldwork. The solution was provided by systems integrator DataSpan, using Enasys software to manage data regarding the location of inventoried devices. Langley, located near the mouth of the Chesapeake Bay, in Hampton, Va., was established in 1917 as the United States' first civilian aeronautics laboratory. Its engineers work on technologies to make civilian and military planes safer, quieter and more efficient. 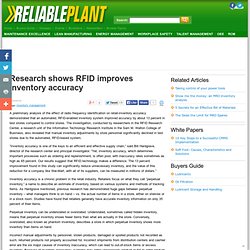 The investigation, conducted by researchers in the , a research unit of the Information Technology Research Institute in the of Business, also revealed that manual inventory adjustments by store personnel significantly declined in test stores due to the automated, RFID-based system. “Inventory accuracy is one of the keys to an efficient and effective supply chain,” said Bill Hardgrave, director of the research center and principal investigator. “Yet, inventory accuracy, which determines important processes such as ordering and replenishment, is often poor, with inaccuracy rates sometimes as high as 65 percent. Our results suggest that RFID technology makes a difference. Inventory accuracy is a chronic problem in the retail industry.