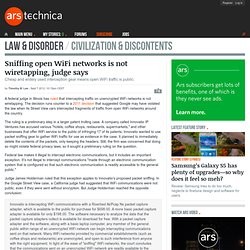 The decision runs counter to a 2011 decision that suggested Google may have violated the law when its Street View cars intercepted fragments of traffic from open WiFi networks around the country. The ruling is a preliminary step in a larger patent trolling case. A company called Innovatio IP Ventures has accused various "hotels, coffee shops, restaurants, supermarkets," and other businesses that offer WiFi service to the public of infringing 17 of its patents. Innovatio wanted to use packet sniffing gear to gather WiFi traffic for use as evidence in the case. It planned to immediately delete the contents of the packets, only keeping the headers. Federal law makes it illegal to intercept electronic communications, but it includes an important exception. Judge James Holderman ruled that this exception applies to Innovatio's proposed packet sniffing. 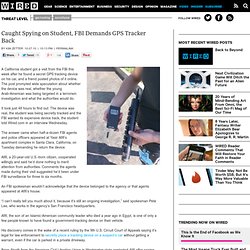 The post prompted wide speculation about whether the device was real, whether the young Arab-American was being targeted in a terrorism investigation and what the authorities would do. It took just 48 hours to find out: The device was real, the student was being secretly tracked and the FBI wanted its expensive device back, the student told Wired.com in an interview Wednesday. The answer came when half-a-dozen FBI agents and police officers appeared at Yasir Afifi’s apartment complex in Santa Clara, California, on Tuesday demanding he return the device.

Biometrics at US Borders

HP printers hacked. IQ root care on cellphones. If Vic Toews is in favour of police internet snooping, I'm against it. Blair Gable / ReutersPublic Safety Minister Vic Toews The debate over the Conservatives’ new internet-snooping law is a classic case of good intentions being pitted against human distrust. 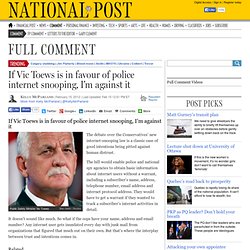 The bill would enable police and national spy agencies to obtain basic information about internet users without a warrant, including a subscriber’s name, address, telephone number, email address and internet protocol address. They would have to get a warrant if they wanted to track a subscriber’s internet activities in detail. It doesn’t sound like much. So what if the cops have your name, address and email number? The government is reading your tweets. A surveillance program monitors "bad" words on Facebook and other social-media sites, a privacy group's lawsuit reveals. 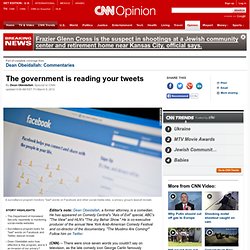 The Department of Homeland Security reportedly is monitoring social-media websites Surveillance program looks for "bad" words on Facebook and Twitter, lawsuit revealsDean Obeidallah asks how effective is this program, and is it an invasion of our privacy? Obeidallah says this program may open the door to more intrusive types of surveillance Editor's note: Dean Obeidallah, a former attorney, is a comedian. He has appeared on Comedy Central's "Axis of Evil" special, ABC's "The View" and HLN's "The Joy Behar Show. " He is co-executive producer of the annual New York Arab-American Comedy Festival and co-director of the documentary, "The Muslims Are Coming! " (CNN) -- There were once seven words you couldn't say on television, as the late comedy icon George Carlin famously lampooned 40 years ago. 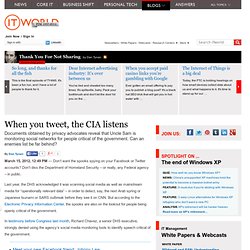 Don’t diss the Department of Homeland Security – or really, any Federal agency – in public. Last year, the DHS acknowledged it was scanning social media as well as mainstream media for “operationally relevant data” – in order to detect, say, the next Arab spring or Japanese tsunami or SARS outbreak before they see it on CNN. But according to the Electronic Privacy Information Center, the spooks are also on the lookout for people being openly critical of the government.