Fitbit Prices I.P.O. at $20 a Share, Above Top of Its Range. Photo When Fitbit begins trading on the New York Stock Exchange on Thursday, it will do so at a healthy valuation. 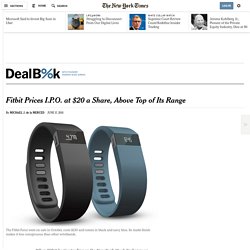 The company, which sells popular wearable fitness-tracking devices like the Fitbit Surge bracelet, priced its initial public offering at $20 a share on Wednesday, a dollar above its already heightened price range of $17 to $19 a share. At that level, the company will raise $732 million for itself and its selling stockholders after increasing the number of shares to be sold to 36.6 million from 34.5 million. The price values Fitbit at $4.1 billion. The shares will begin trading on Thursday on the New York Stock Exchange under the symbol FIT. Now Fitbit, which has grown since its inception in 2007 into one of the most popular makers of health-tracking devices, must prove that it can perform in an industry that has also drawn in Apple and Google. Fitbit faces another challenge in the form of legal fights from a rival, Jawbone, which filed two lawsuits over the last month. 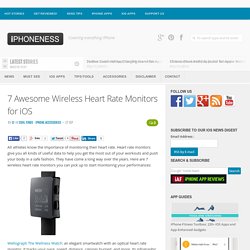 Heart rate monitors give you all kinds of useful data to help you get the most out of your workouts and push your body in a safe fashion. They have come a long way over the years. Here are 7 wireless heart rate monitors you can pick up to start monitoring your performances: Wellograph The Wellness Watch: an elegant smartwatch with an optical heart rate monitor. It tracks your pace, speed, distance, calories burned, and more. Wahoo Fitness TICKR RUN Motion Analytics Heart Rate Monitor: this heart tracker is compatible with iOS and Android devices. 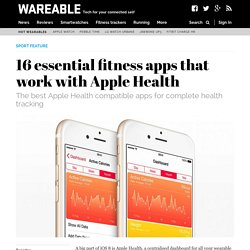 The Health app aggregates and displays information from the likes of Withings, Jawbone and RunKeeper, as well as data from the iPhone 6's bevy of sensors, as a way of binding together the often disparate information collected by your wearables. Essential reading: Apple Health vs Google Fit However, the compatible apps and the type of data Apple Health can share is far from clear, which is why we've rounded up our favourite iOS 8 friendly apps. 7 Minute Workout The ever popular workout app will log the calories burned during your seven minute fat-blasting regimes with Apple Health, as you get down and give your iPhone twenty. Free, 7 Minute Workout UP by Jawbone. Thermometer Sends Anonymous Temperature Readings to Schools. It’s important for parents to know their child’s health when they decide whether to send that child to school for the day, but what about the health of other students? 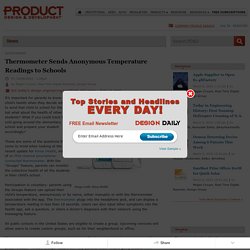 What if you could track the cold going around the elementary school and prepare your student accordingly? Those are some of the questions that come to mind when looking at the recent update for Kinsa Health, maker of an FDA-cleared smartphone-connected thermometer. With the “Groups” feature, parents can monitor the collective health of all the students in their child’s school. Participation is voluntary: parents using the Groups feature can upload their child’s temperature, anonymously or by name, either manually or with the thermometer associated with the app. The thermometer plugs into the headphone jack, and can display a temperature reading in less than 10 seconds.

All public schools in the United States are eligible to create a group. The Groups beta was launched earlier this year in 17 schools. Take The Tour. Tinke. Fitbit for Testosterone Junkies: Health-Tracking Gadgets Reach the Molecular Level - Businessweek. The experiment kicked off a year ago when Ayub Khattak, co-founder of the health-monitoring startup Cue, resolved to eat only quinoa, leafy greens, and the like. 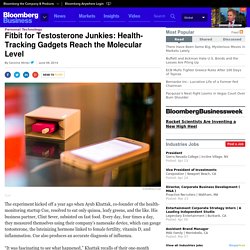 His business partner, Clint Sever, subsisted on fast food. Every day, four times a day, they measured themselves using their company’s namesake device, which can gauge testosterone, the luteinizing hormone linked to female fertility, vitamin D, and inflammation. Cue also produces an accurate diagnosis of influenza. “It was fascinating to see what happened,” Khattak recalls of their one-month experiment, which coincided with an intense period of development for their startup. Their respective diets had an easily trackable effect, and Sever’s fast-food intake took a toll. Increases in inflammation, the co-founders learned, corresponded with decreased testosterone levels. Courtesy CueCue and cartridgesAfter four years and $1.5 million in investments, the San Diego-based startup began taking orders for the Cue device last month.