Aliens, Autonomous Cars, and AI: This Is the World of 2118. Learning From the Past Humans are naturally inclined to think towards the future. 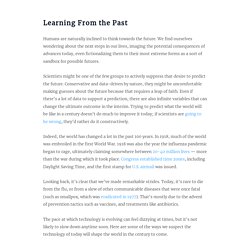 New Report Predicts Renewable Energy Will be Cheaper Than Fossil Fuels by 2020. A Real Competitor Renewable energy may not be completely replacing fossil fuels just yet, but it’s undeniable that society is warming to the idea of using solar and wind power in place of coal. 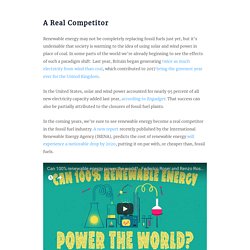 In some parts of the world we’re already beginning to see the effects of such a paradigm shift: Last year, Britain began generating twice as much electricity from wind than coal, which contributed to 2017 being the greenest year ever for the United Kingdom. In the United States, solar and wind power accounted for nearly 95 percent of all new electricity capacity added last year, according to Engadget. Losing Weight in the Future Will Not Be One Size Fits All. Researchers Create Self-Repairing Electrical Circuit. In Brief Scientists have fabricated a flexible electrical circuit that, when cut into two pieces, can repair itself and fully restore its original conductivity. 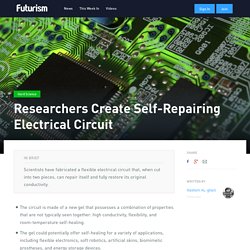 The paper was published in a recent issue of Nano Letters. Emerging Technologies Ready to Break Out, In One Chart. In Brief Research group Gartner is famous for its "hype cycle for emerging technologies," which breaks down new tech into a neat graph that predicts which technologies are ready to be commercialized today. 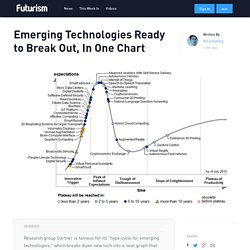 According to Gartner, new technology with the potential to be exponential usually follows a predictable cycle: Early innovation, then a peak of inflated expectations, then a period of disillusionment, followed by a steady rise to ubiquity and profitability.For instance, Gartner is pointing to autonomous vehicles as a technology at the peak of hype. Forget Google Glass—It’s All About Google Pants. Wearable technology is the future. 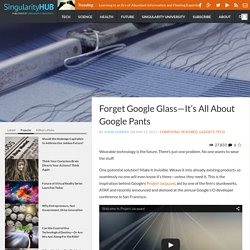 There’s just one problem. No one wants to wear the stuff. One potential solution? Top 10 exponential companies. Camera and GPS Implants Embedded In Rhino Horns Will Fight Poachers - Futurism. Future Timeline Latest Updates. The Top 30 Science Stories of 2015. IEEE Spectrum: Technology, Engineering, and Science News. World Economic Forum - Meta-Council on Emerging Technologies 2014-2016. New technology is arriving faster than ever and holds the promise of solving many of the world’s most pressing challenges, such as food and water security, energy sustainability and personalized medicine. 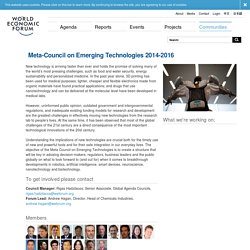 In the past year alone, 3D printing has been used for medical purposes; lighter, cheaper and flexible electronics made from organic materials have found practical applications; and drugs that use nanotechnology and can be delivered at the molecular level have been developed in medical labs. However, uninformed public opinion, outdated government and intergovernmental regulations, and inadequate existing funding models for research and development are the greatest challenges in effectively moving new technologies from the research lab to people’s lives. Top 10 emerging technologies of 2015. Technology is perhaps the greatest agent of change in the modern world. 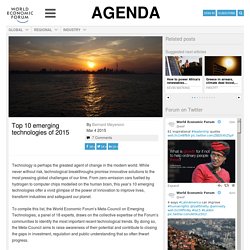 While never without risk, technological breakthroughs promise innovative solutions to the most pressing global challenges of our time. From zero-emission cars fuelled by hydrogen to computer chips modelled on the human brain, this year’s 10 emerging technologies offer a vivid glimpse of the power of innovation to improve lives, transform industries and safeguard our planet. To compile this list, the World Economic Forum’s Meta-Council on Emerging Technologies, a panel of 18 experts, draws on the collective expertise of the Forum’s communities to identify the most important recent technological trends. 2015’s Most Electrifying Emerging Tech? World Economic Forum Releases Annual List. 2015’s Most Electrifying Emerging Tech? 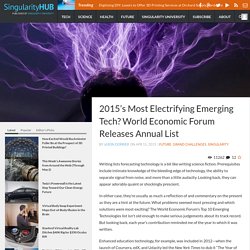 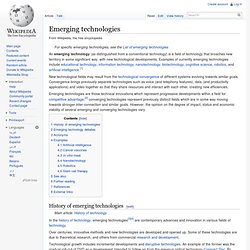 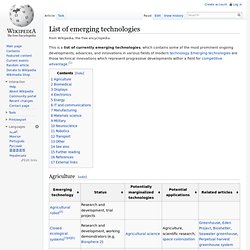 11 Predictions for the World in 2030 That May Sound Outrageous Today but not in the Future. - I Look Forward To. All futurism is speculation. It's time someone made some claims. I've picked developments I honestly consider plausible. Here are my 11 predictions for the world of 2030. Technologies that will Change the World by 2020. Fourteen innovators describe the technological forces that will shape the world by decade's end.

Fulvia Montresor | World Economic Forum The World Economic Forum recently asked the incoming members of its 2015 class of Technology Pioneers to share their thoughts on how technology will change the world by the end of this decade. 23 incredible new technologies you’ll see by 2021. 10 Ways the World Will Change by 2025. Teleportation, cures for disease, and no more plastic? It may sound impossible, but Reuters has predicted differently - and all by 2025. By: Amanda Froelich, True Activist. Teleportation, food equality, successful disease treatment – sound too good to be true? Emerging Technologies That Will Change The World. 10 Incredible Cutting-Edge Technologies In Development. TECH - RISING 2.0. Peering into the future.

Futures Studies is a thriving field - perhaps because it will never be exhausted! This page contains some interesting links in the area. This page has information about... Other futures pages on this site... The Future of Technology and the Technology of the Future - Futurism. Ray Kurzweil’s Mind-Boggling Predictions for the Next 25 Years. How to see into the future. Billions of dollars are spent on experts who claim they can forecast what’s around the corner, in business, finance and economics. “Special Forces” Innovation: How DARPA Attacks Problems. Artwork: Monika Grzymala, The River, 2012, Handmade cotton rag paper, fishing line and wire, weaving material of local plants Over the past 50 years, the Pentagon’s Defense Advanced Research Projects Agency (DARPA) has produced an unparalleled number of breakthroughs.

Arguably, it has the longest-standing, most consistent track record of radical invention in history. Future technology. Internet of Things (IoT): The Third Wave. The Internet of Things (IoT) is the network of physical objects accessed through the Internet. These objects contain embedded technology to interact with internal states or the external environment. In other words, when objects can sense and communicate, it changes how and where decisions are made, and who makes them. Of Time Machines and Foresight Garages: About the September-October FUTURIST. One of the most frequently asked questions here at the World Future Society is How do I become a futurist? Technology. Samsung Display Introduces First Mirror and Transparent OLED Display Panels. HONG KONG--(BUSINESS WIRE)--(Retail Asia Expo 2015) – Samsung Display Co., Ltd. unveiled the industry’s first Mirror and Transparent OLED display panels in a dazzling state-of-the-art showcase for personalized shopping and informational browsing, held this week at the Hong Kong Convention and Exhibition Centre.

Scientists Make Headway Toward Invisibility Cloaking. New invisibility cloak hides objects from human view. Invisibility Breakthrough for Japanese Researchers. New police radars can 'see' inside homes. Radar devices allowing officers to detect movement through walls have been secretly used by at least 50 U.S. law enforcement agencies over the last two years. VPC WASHINGTON — At least 50 U.S. law enforcement agencies have secretly equipped their officers with radar devices that allow them to effectively peer through the walls of houses to see whether anyone is inside, a practice raising new concerns about the extent of government surveillance. Cops In Dubai Are Using Google Glass To Catch Speeding Drivers. Ayuda Web A police officer wearing Google Glass.