Billion Dollar Surveillance Blimp to Launch over Maryland. In just a few days, the Army will launch the first of two massive blimps over Maryland, the last gasp of an 18-year-long $2.8-billion Army project intended to use giant airships to defend against cruise missiles. And while the blimps may never stave off a barrage of enemy missiles, their ability to spot and track cars, trucks and boats hundreds of miles away is raising serious privacy concerns. The project is called JLENS – or “Joint Land Attack Cruise Missile Defense Elevated Netted Sensor System.” And you couldn’t come up with a better metaphor for wildly inflated defense contracts, a ponderous Pentagon bureaucracy, and the U.S. surveillance leviathan all in one.

Built by the Raytheon Company, the JLENS blimps operate as a pair. One provides omnipresent high-resolution 360-degree radar coverage up to 340 miles in any direction; the other can focus on specific threats and provide targeting information. 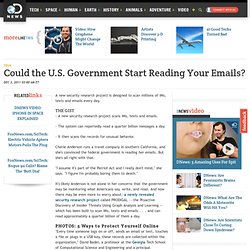 Cherie Anderson runs a travel company in southern California, and she's convinced the federal government is reading her emails. But she's all right with that. "I assume it's part of the Patriot Act and I really don't mind," she says. It's likely Anderson is not alone in her concerns that the government may be monitoring what Americans say, write, and read. PHOTOS: 5 Ways to Protect Yourself Online. Mind Your Tweets: The CIA Social Networking Surveillance System. That social networking sites and applications such as Facebook, Twitter and their competitors can facilitate communication and information sharing amongst diverse groups and individuals is by now a cliché. 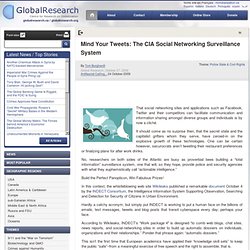 It should come as no surprise then, that the secret state and the capitalist grifters whom they serve, have zeroed-in on the explosive growth of these technologies. One can be certain however, securocrats aren’t tweeting their restaurant preferences or finalizing plans for after work drinks. No, researchers on both sides of the Atlantic are busy as proverbial bees building a “total information” surveillance system, one that will, so they hope, provide police and security agencies with what they euphemistically call “actionable intelligence.”

By David EdwardsWednesday, June 22, 2011 13:48 EDT The former self-appointed spokesman for the collective of hacktivists known as “Anonymous” revealed Tuesday what he called a massive U.S spying program against the Arab world. 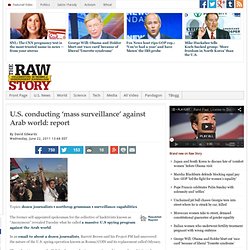 In an email to about a dozen journalists, Barrett Brown said his Project PM had uncovered the nature of the U.S. spying operation known as Romas/COIN and its replacement called Odyssey. “For at least two years, the U.S. has been conducting a secretive and immensely sophisticated campaign of mass surveillance and data mining against the Arab world, allowing the intelligence community to monitor the habits, conversations, and activity of millions of individuals at once,” Brown wrote. Brown’s team made the discovery by analyzing 70,000 emails from data intelligence firm HBGary Federal. Social networking surveillance: trust no one. A woman uses her BlackBerry at a shopping mall in Dubai, UAE. 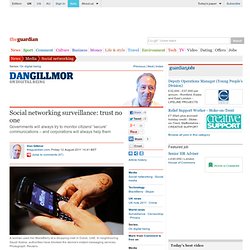 In neighbouring Saudi Arabia, authorities have blocked the device's instant messaging services. Photograph: Reuters Law enforcers in the United Kingdom and elsewhere are coming to grips with a hard reality: modern communications technologies give activists of all kinds an easier way to organise and deploy. EFF Surveillance Self-Defense Project. Dangerous Cybercrime Treaty Pushes Surveillance and Secrecy Worldwide. Posted on 2011.08.25 by Katitza Rodriguez As part of an emerging international trend to try to 'civilize the Internet' , one of the world's worst Internet law treaties--the highly controversial Council of Europe (CoE) Convention on Cybercrime --is back on the agenda. 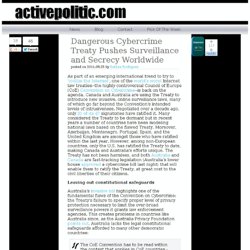 Canada and Australia are using the Treaty to introduce new invasive, online surveillance laws, many of which go far beyond the Convention's intended levels of intrusiveness. Negotiated over a decade ago, only 31 of its 47 signatories have ratified it. Many considered the Treaty to be dormant but in recent years a number of countries have been modeling national laws based on the flawed Treaty. Moreover, Azerbaijan, Montenegro, Portugal, Spain, and the United Kingdom are amongst those who have ratified within the last year.