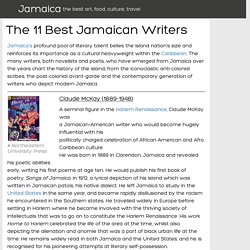 He was born in 1889 in Clarendon, Jamaica and revealed his poetic abilities early, writing his first poems at age ten. He would publish his first book of poetry, Songs of Jamaica, in 1912, a lyrical depiction of his island which was written in Jamaican patois, his native dialect. He left Jamaica to study in theUnited States in the same year, and became rapidly disillusioned by the racism he encountered in the Southern states. He travelled widely in Europe before settling in Harlem where he became involved with the thriving society of intellectuals that was to go on to constitute the Harlem Renaissance. Roger Mais (1905-1955) Andrew Salkey (1928-1995) Sylvia Wynter (b. 1928) Lindsay Barrett (b. 1941) Lorna Goodison (b. 1947) Kerry Young (b. 1955) Novels & Short Story Collections by Caribbean Authors. 'The Whale House' by Sharon Millar. 19 October 2013 ‘The Whale House’ by Sharon Millar These offshore islands rise out of the water, rugged and black with deep crevices and craggy promontories. 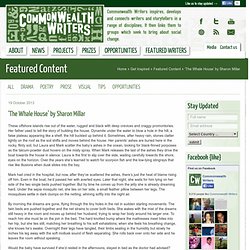 Her father used to tell the story of building the house. Dynamite under the water to blow a hole in the hill, a false plateau appearing like a shelf, the hill buckled up behind it. Sometimes, after heavy rain, stones clatter lightly on the roof as the soil shifts and moves behind the house. Mark had cried in the hospital, but now, after they’ve scattered the ashes, there’s just the heat of blame rising off him. Sharon Millar is interviewed at the Hay Festival. 21 July 2013 Sharon Millar is interviewed at the Hay Festival Sharon Millar was the joint winner for the 2013 Commonwealth Short Story Prize. 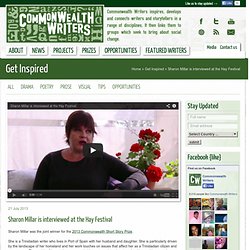 She is a Trinidadian writer who lives in Port of Spain with her husband and daughter. She is particularly driven by the landscape of her homeland and her work touches on issues that affect her as a Trinidadian citizen and as a woman. The worlds of her stories are occupied by protagonists who struggle with moral issues, crime, illness, loyalty, betrayal, and all the other messy things that make up a life. 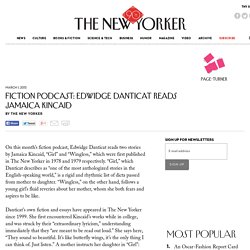 “Girl,” which Danticat describes as “one of the most anthologized stories in the English-speaking world,” is a rigid and rhythmic list of dicta passed from mother to daughter. “Wingless,” on the other hand, follows a young girl’s fluid reveries about her mother, whom she both fears and aspires to be like. Danticat’s own fiction and essays have appeared in The New Yorker since 1999. She first encountered Kincaid’s works while in college, and was struck by their “extraordinary lyricism,” understanding immediately that they “are meant to be read out loud.”

She says here, “They sound so beautiful. The Glass Bottle Trick by Nalo Hopkinson. The air was full of storms, but they refused to break. 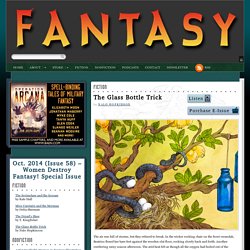 In the wicker rocking chair on the front verandah, Beatrice flexed her bare feet against the wooden slat floor, rocking slowly back and forth. Another sweltering rainy season afternoon. The arid heat felt as though all the oxygen had boiled out of the parched air to hang as looming rainclouds, waiting. Oh, but she loved it like this. The hotter the day, the slower she would move, basking. “Anything more today, Mistress Powell? Beatrice felt the shyness come over her as it always did when she thought of giving the older woman orders. Gloria quirked an eyebrow, crinkling her face like running a fork through molasses. Beatrice gave an abortive, shamefaced “huh” of a laugh.