How to Succeed as a Writer in Dallas. Much has been made of the blossoming literary scene in Dallas; and yet, the daily struggle of being a writer, in Dallas and in general, is less openly discussed. 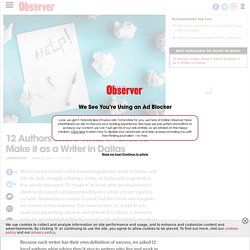 To "make it" in most other professions is to climb to the top of a predetermined ladder, while a writer's path is variable. Borges on turning trauma into raw material for art, the mesmerizing microscopy of trees, Ursula K Le Guin on time and the wellspring of responsibility. “Forget your personal tragedy,” Ernest Hemingway exhorted his dear friend F. 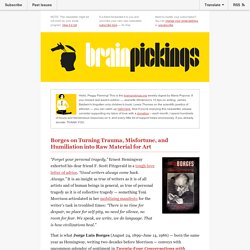 Scott Fitzgerald in a tough-love letter of advice. “Good writers always come back. Is the Writer’s Only Responsibility to His Art? Read These Seven Books, and You'll be a Better Writer. Donald Miller I used to play golf but I wasn’t very good. 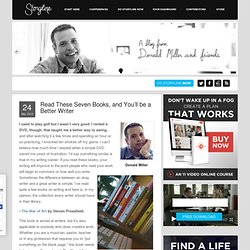 I rented a DVD, though, that taught me a better way to swing, and after watching it a few times and spending an hour or so practicing, I knocked ten strokes off my game. I can’t believe how much time I wasted when a simple DVD saved me years of frustration. I’d say something similar is true in my writing career. If you read these books, your writing will improve to the point people who read your work will begin to comment on how well you write. . • The War of Art by Steven Pressfield: This book is aimed at writers, but it’s also applicable to anybody who does creative work. Pressfield leaves out all the mushy romantic talk about the writing life, talk I don’t find helpful. . • On Writing Well by William Zinsser: Zinsser may be the best practical writing coach out there. 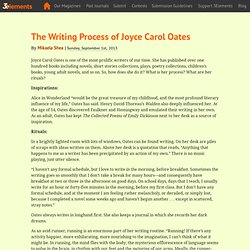 She has published over one hundred books including novels, short stories collections, plays, poetry collections, children’s books, young adult novels, and so on. So, how does she do it? 18 Quotes for Writers from Ernest Hemingway. Today marks the 115th anniversary of Ernest Hemingway’s birth. 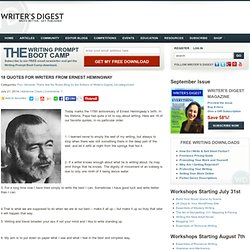 In his lifetime, Papa had quite a lot to say about writing. Here are 18 of our favorite quotes, in no particular order. 1. I learned never to empty the well of my writing, but always to stop when there was still something there in the deep part of the well, and let it refill at night from the springs that fed it. 2. 3. 4.That is what we are supposed to do when we are at our best – make it all up – but make it up so truly that later it will happen that way. 5. 6. 7. 8. 9. 10. 11. 12. 13. 14. My Life as a Writer. Photo The following is an interview Philip Roth gave to Daniel Sandstrom, the cultural editor at Svenska Dagbladet, for publication in Swedish translation in that newspaper and in its original English in the Book Review. “Sabbath’s Theater” is now being translated into Swedish, almost 20 years after its original release. How would you describe this book to readers who have not yet read it or heard of it, and how would you describe the main character, the unforgettable Mickey Sabbath?

“Sabbath’s Theater” takes as its epigraph a line of the aged Prospero’s in Act 5 of “The Tempest.” “Every third thought,” says Prospero, “shall be my grave.” I could have called the book “Death and the Art of Dying.” Mickey Sabbath doesn’t live with his back turned to death the way normal people like us do. His book is death-haunted — there is Sabbath’s great grief about the death of others and a great gaiety about his own. Sabbath is anything but the perfect external man.

Everybody has a hard job. Now? Hearing voices allowed Charles Dickens to create extraordinary fictional worlds. Nabokov on Inspiration and the Six Short Stories Everyone Should Read. By Maria Popova “A prefatory glow, not unlike some benign variety of the aura before an epileptic attack, is something the artist learns to perceive very early in life.” 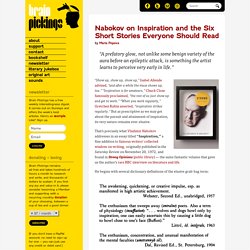 “Show up, show up, show up,” Isabel Allende advised, “and after a while the muse shows up, too.” “Inspiration is for amateurs,” Chuck Close famously proclaimed, “the rest of us just show up and get to work.” “When you work regularly,” Gretchen Rubin asserted, “inspiration strikes regularly.” But as prescriptive as we may get about the pursuit and attainment of inspiration, its very nature remains ever-elusive. That’s precisely what Vladimir Nabokov addresses in an essay titled “Inspiration,” a fine addition to famous writers’ collected wisdom on writing, originally published in the Saturday Review on November 20, 1972, and found in Strong Opinions (public library) — the same fantastic volume that gave us the author’s rare BBC interview on literature and life.

Famous Advice on Writing: The Collected Wisdom of Great Writers.