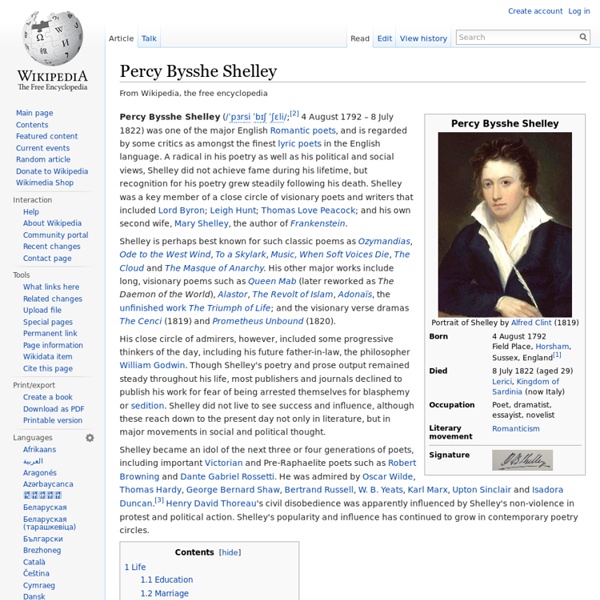 Percy Bysshe Shelley (/ˈpɜrsi ˈbɪʃ ˈʃɛli/;[2] 4 August 1792 – 8 July 1822) was one of the major English Romantic poets, and is regarded by some critics as amongst the finest lyric poets in the English language. A radical in his poetry as well as his political and social views, Shelley did not achieve fame during his lifetime, but recognition for his poetry grew steadily following his death. Shelley was a key member of a close circle of visionary poets and writers that included Lord Byron; Leigh Hunt; Thomas Love Peacock; and his own second wife, Mary Shelley, the author of Frankenstein. His close circle of admirers, however, included some progressive thinkers of the day, including his future father-in-law, the philosopher William Godwin. Though Shelley's poetry and prose output remained steady throughout his life, most publishers and journals declined to publish his work for fear of being arrested themselves for blasphemy or sedition. Life[edit] Education[edit] Marriage[edit] Byron[edit]

Ralph Waldo Emerson Ralph Waldo Emerson (May 25, 1803 – April 27, 1882) was an American essayist, lecturer, and poet, who led the Transcendentalist movement of the mid-19th century. He was seen as a champion of individualism and a prescient critic of the countervailing pressures of society, and he disseminated his thoughts through dozens of published essays and more than 1,500 public lectures across the United States. He remains among the linchpins of the American romantic movement,[3] and his work has greatly influenced the thinkers, writers and poets that have followed him. When asked to sum up his work, he said his central doctrine was "the infinitude of the private man."[4] Emerson is also well known as a mentor and friend of fellow Transcendentalist Henry David Thoreau.[5] Early life, family, and education[edit] Emerson was born in Boston, Massachusetts, on May 25, 1803,[6] son of Ruth Haskins and the Rev. In 1826, faced with poor health, Emerson went to seek out warmer climates. While in St.

Walt Whitman Walter "Walt" Whitman (/ˈhwɪtmən/; May 31, 1819 – March 26, 1892) was an American poet, essayist and journalist. A humanist, he was a part of the transition between transcendentalism and realism, incorporating both views in his works. Whitman is among the most influential poets in the American canon, often called the father of free verse.[1] His work was very controversial in its time, particularly his poetry collection Leaves of Grass, which was described as obscene for its overt sexuality. Born in Huntington on Long Island, Whitman worked as a journalist, a teacher, a government clerk, and—in addition to publishing his poetry—was a volunteer nurse during the American Civil War. Whitman's sexuality is often discussed alongside his poetry. Whitman was concerned with politics throughout his life. Life and work Early life Early career After his teaching attempts, Whitman went back to Huntington, New York to found his own newspaper, the Long Islander. Brooklyn Daily Eagle, circa 1915

Gregory Corso Gregory Nunzio Corso (March 26, 1930 – January 17, 2001) was an American poet, youngest of the inner circle of Beat Generation writers (with Jack Kerouac, Allen Ginsberg, and William S. Burroughs).[1] Early life[edit] Born Nunzio Corso at St. Vincent's hospital (later called the Poets' hospital after Dylan Thomas died there), Corso later selected the name "Gregory" as a confirmation name. Corso's mother, Michelina Corso (born Colonna) was born in Miglianico, Abruzzo, Italy, and immigrated to the United States at the age of nine, with her mother and four other sisters. Childhood[edit] Sometime in his first year, Corso's mother mysteriously abandoned him, leaving him at the New York Foundling Home, a branch of the Catholic Church Charities. Corso spent the next 11 years in foster care in at least five different homes. Corso, then alone, became a homeless child on the streets of Little Italy. Adolescence[edit] Corso at Clinton Correctional[edit] There, Corso began writing poetry.

William Blake William Blake (28 November 1757 – 12 August 1827) was an English poet, painter, and printmaker. Largely unrecognised during his lifetime, Blake is now considered a seminal figure in the history of the poetry and visual arts of the Romantic Age. His prophetic poetry has been said to form "what is in proportion to its merits the least read body of poetry in the English language".[2] His visual artistry led one contemporary art critic to proclaim him "far and away the greatest artist Britain has ever produced".[3] In 2002, Blake was placed at number 38 in the BBC's poll of the 100 Greatest Britons.[4] Although he lived in London his entire life (except for three years spent in Felpham),[5] he produced a diverse and symbolically rich oeuvre, which embraced the imagination as "the body of God"[6] or "human existence itself".[7] Early life[edit] 28 Broad Street (now Broadwick Street) in an illustration of 1912. Apprenticeship to Basire[edit] Royal Academy[edit] Gordon Riots[edit] Engravings[edit]

Neil Gaiman On Edgar Allan Poe by Marilynne Robinson Edgar Allan Poe was and is a turbulence, an anomaly among the major American writers of his period, an anomaly to this day. He both amazed and antagonized his contemporaries, who could not dismiss him from the ﬁrst rank of writers, though many felt his work to be morally questionable and in dubious taste, and though he scourged them in print regularly in the course of producing a body of criticism that is sometimes ﬂatly vindictive and often brilliant. It seems to have been true of Poe that no one could look at him without seeing more than they would wish or he could tolerate. His clothing was always neat and genteel and very shabby. The writer Thomas Wentworth Higginson said Poe had “the look of over-sensitiveness which when uncontrolled may prove more debasing than coarseness.” Poe published The Narrative of Arthur Gordon Pym of Nantucket in 1838, relatively early in his career. The word that recurs most crucially in Poe’s ﬁctions is horror. Poe’s mind was by no means commonplace.

Pale Fire – The Floating Library By John Shade I was the shadow of the waxwing slain By the false azure in the windowpane; I was the smudge of ashen fluff—and I Lived on, flew on, in the reflected sky. And from the inside, too, I’d duplicate Myself, my lamp, an apple on a plate: Uncurtaining the night, I’d let dark glass Hang all the furniture above the grass, And how delightful when a fall of snow Covered my glimpse of lawn and reached up so As to make chair and bed exactly stand Upon that snow, out in that crystal land! Retake the falling snow: each drifting flake Shapeless and slow, unsteady and opaque, A dull dark white against the day’s pale white And abstract larches in the neutral light. And then the gradual and dual blue As night unites the viewer and the view, And in the morning, diamonds of frost Express amazement: Whose spurred feet have crossed From left to right the blank page of the road? Reading from left to right in winter’s code: A dot, an arrow pointing back; repeat: Dot, arrow pointing back . . .