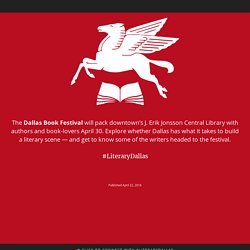 Erik Jonsson Central Library with authors and book-lovers April 30. Explore whether Dallas has what it takes to build a literary scene — and get to know some of the writers headed to the festival. #LiteraryDallas By Lauren Smart | Special Contributor North Texas is not known as a literary hotbed. Granted, the region is home to award-winning authors (Ben Fountain, Merritt Tierce) and headquarters of a national bookstore chain (Half Price). Yet the last two years have seen a shift. Longtime participants say seeds for a literary scene might finally be taking root in Dallas. “I get the feeling the Dallas literary scene is reaching some critical mass,” says Fountain, author of the internationally praised Billy Lynn’s Long Halftime Walk. The question now is: How does this book culture keep from fizzling out? How we got here. 4 Reasons You Should Never Write Alone. Imagine the quintessential writer: introverted, glasses, coffee in hand, sitting alone at a small desk, while poking their fingers on a keyboard. 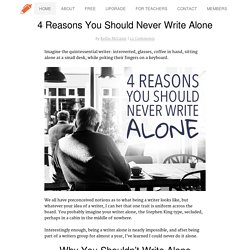 We all have preconceived notions as to what being a writer looks like, but whatever your idea of a writer, I can bet that one trait is uniform across the board. You probably imagine your writer alone, the Stephen King type, secluded, perhaps in a cabin in the middle of nowhere. Interestingly enough, being a writer alone is nearly impossible, and after being part of a writers group for almost a year, I’ve learned I could never do it alone. Why You Shouldn’t Write Alone Great writing is done in community, and besides having more great friends, there are four major benefits to not being a writer alone: 1. Editing is hard. Regardless of how much you know about spelling, subject-verb agreement, or colons, all writers make mistakes.

Editors can be extremely expensive. 2. There’s something about commiserating that feels so great. 3. The Good, The Bad, and the Ugly, or How to Choose a Writers’ Group. I know I’m not in the majority when I recommend that you get involved with a writers’ group. 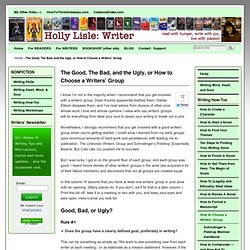 Dean Koontz apparently loathes them, Harlan Ellison despises them, and I’ve read advice from dozens of other pros whose work I love and whose opinions I value who say writers’ groups will do everything from steal your soul to cause your writing to break out in pox. Nonetheless, I strongly recommend that you get involved with a good writers’ group when you’re getting started. I credit what I learned from my early groups (plus enormous amounts of hard work and persistence) with leading me to publication.

The Unknown Writers’ Group and Schrodinger’s Petshop (Essentially Bizarre, But Cats Like Us) pushed me to succeed. But I was lucky. Writing Groups. What Can Writers Do at WEbook.com? The Writer's Garret Literary Center. View.writers-community. View.writers-community. The Good, The Bad, and the Ugly, or How to Choose a Writers’ Group. Questions for Your Beta Readers – and To Focus Your Own Revisions. ﻿By Jodie Renner, editor & author; @JodieRennerEdPart of the Indie Author Series So you’ve completed the first draft of your novel? 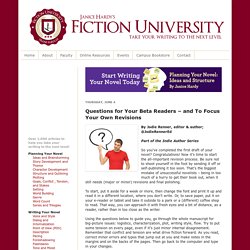 Congratulations! Now it’s time to start the all-important revision process. Be sure not to shoot yourself in the foot by sending it off or self-publishing it too soon. That’s the biggest mistake of unsuccessful novelists – being in too much of a hurry to get their book out, when it still needs (major or minor) revisions and final polishing. To start, put it aside for a week or more, then change the font and print it up and read it in a different location, where you don’t write. Now it’s time to seek out about 3 to 6 avid readers to give you some feedback. So how do you find your beta readers? To avoid generic (and generally useless) responses like “I liked it,” “It was good,” or “It was okay,” it’s best to guide your readers with specific questions. 1. 2. 3. 4. 5. 6. 7. 8. 9. 10. 11. 12. 13. 14. 15.