Deep-Holes. Sally packed devilled eggs—something she usually hated to take on a picnic, because they were so messy. Ham sandwiches, crab salad, lemon tarts—also a packing problem. Kool-Aid for the boys, a half bottle of Mumm’s for herself and Alex. Face. Alice Munro’s “Train” (2012) Dimension. Doree had to take three buses—one to Kincardine, where she waited for one to London, where she waited again, for the city bus out to the facility. 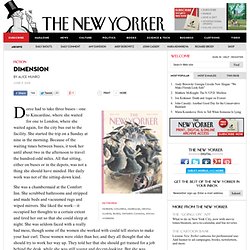 She started the trip on a Sunday at nine in the morning. Because of the waiting times between buses, it took her until about two in the afternoon to travel the hundred-odd miles. Fiction: Meneseteung. The narrator describes "Offerings," a book of poems by Almeda Joynt Roth, published in 1873. 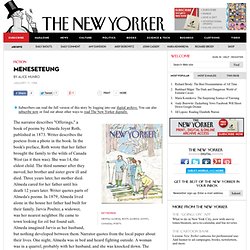 Writer describes the poetess from a photo in the book. In the book's preface, Roth wrote that her father brought the family to the wilds of Canada West (as it then was). She was 14, the eldest child. The third summer after they moved, her brother and sister grew ill and died. Three years later, her mother died. Alice Munro. Undefined undefined "Boys And Girls" My father was a fox farmer. 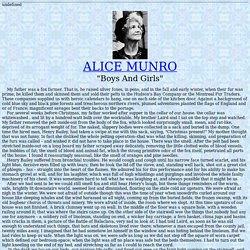 Leaving Maverley - The New Yorker. In the old days when there was a movie theatre in every town there was one in this town, too, in Maverley, and it was called the Capital, as such theatres often were. 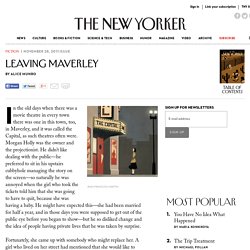 Morgan Holly was the owner and the projectionist. He didn’t like dealing with the public—he preferred to sit in his upstairs cubbyhole managing the story on the screen—so naturally he was annoyed when the girl who took the tickets told him that she was going to have to quit, because she was having a baby. He might have expected this—she had been married for half a year, and in those days you were supposed to get out of the public eye before you began to show—but he so disliked change and the idea of people having private lives that he was taken by surprise. Fortunately, she came up with somebody who might replace her. A girl who lived on her street had mentioned that she would like to have an evening job. Morgan said that that was fine—he didn’t hire a ticket-taker to gab with the customers. Amundsen. On the bench outside the station, I sat and waited. 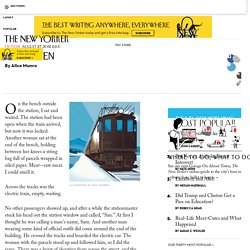 The station had been open when the train arrived, but now it was locked. Another woman sat at the end of the bench, holding between her knees a string bag full of parcels wrapped in oiled paper. Meat—raw meat. I could smell it. Haven. All this happened in the seventies, though in that town and other small towns like it the seventies were not as we picture them now, or as I had known them even in Vancouver. 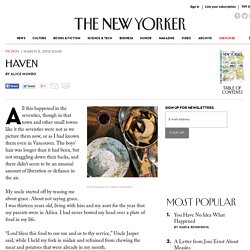 The boys’ hair was longer than it had been, but not straggling down their backs, and there didn’t seem to be an unusual amount of liberation or defiance in the air. My uncle started off by teasing me about grace. Deep-Holes - The New Yorker. Sally packed devilled eggs—something she usually hated to take on a picnic, because they were so messy. 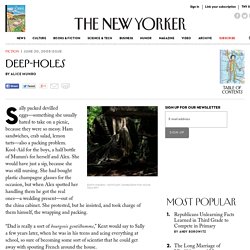 Ham sandwiches, crab salad, lemon tarts—also a packing problem. Kool-Aid for the boys, a half bottle of Mumm’s for herself and Alex. How_i_met_my_husband_by_alice_monroe. Growing Pains in Wingham, Ontario. I lived when I was young at the end of a long road, or a road that seemed long to me. 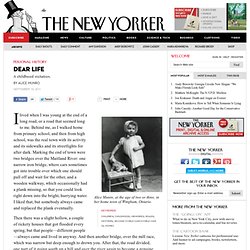 Behind me, as I walked home from primary school, and then from high school, was the real town with its activity and its sidewalks and its streetlights for after dark. Marking the end of town were two bridges over the Maitland River: one narrow iron bridge, where cars sometimes got into trouble over which one should pull off and wait for the other, and a wooden walkway, which occasionally had a plank missing, so that you could look right down into the bright, hurrying water. I liked that, but somebody always came and replaced the plank eventually. Face.

I am convinced that my father looked at me, really saw me, only once. 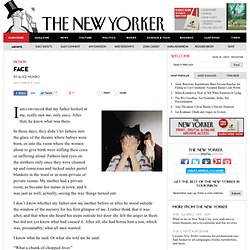 After that, he knew what was there. In those days, they didn’t let fathers into the glare of the theatre where babies were born, or into the room where the women about to give birth were stifling their cries or suffering aloud. Fathers laid eyes on the mothers only once they were cleaned up and conscious and tucked under pastel blankets in the ward or in semi-private or private rooms. The View from Castle Rock. On a visit to Edinburgh with his father when he is nine or ten years old, Andrew finds himself climbing the damp, uneven stone steps of the Castle. 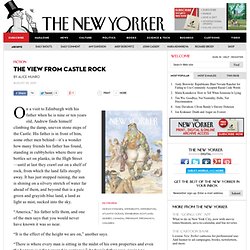 His father is in front of him, some other men behind—it’s a wonder how many friends his father has found, standing in cubbyholes where there are bottles set on planks, in the High Street—until at last they crawl out on a shelf of rock, from which the land falls steeply away. It has just stopped raining, the sun is shining on a silvery stretch of water far ahead of them, and beyond that is a pale green and grayish-blue land, a land as light as mist, sucked into the sky. “America,” his father tells them, and one of the men says that you would never have known it was so near. “It is the effect of the height we are on,” another says. “There is where every man is sitting in the midst of his own properties and even the beggars is riding around in carriages,” Andrew’s father says, paying no attention to them.

“What is this?” Boys and Girls. Runaway. Carla heard the car coming before it topped the little rise in the road that around here they called a hill. It’s her, she thought. Mrs. Passion. When Grace goes looking for the Traverses’ summer house, in the Ottawa Valley, it has been many years since she was in that part of the country. And, of course, things have changed. Highway 7 now avoids towns that it used to go right through, and it goes straight in places where, as she remembers, there used to be curves. This part of the Canadian Shield has many small lakes, which most maps have no room to identify. Wenlock Edge. My mother had a bachelor cousin a good deal younger than her, who used to visit us on the farm every summer. He brought along his mother, Aunt Nell Botts. His own name was Ernie Botts. Dimension. Free Radicals. At first, people kept phoning, to make sure that Nita was not too depressed, not too lonely, not eating too little or drinking too much.

(She had been such a diligent wine drinker that many forgot that she was now forbidden to drink at all.) She held them off, without sounding nobly grief-stricken or unnaturally cheerful or absent-minded or confused. She said that she didn’t need groceries; she was working through what she had on hand. She had enough of her prescription pills and enough stamps for her thank-you notes. Her closer friends probably suspected the truth—that she was not bothering to eat much and that she threw out any sympathy note she happened to get. Deep-Holes. Gravel. Train. Amundsen. The Bear Came over the Mountain. Alice Munro 18 Free Short Stories, Interviews, Review & Articles. Writer My novel is currently being read by publishers.

My BBC Radio 4 comissioned short story aired on March 14th 2014. A short fiction will be published in The Stinging Fly literary magazine in July. My interview with IMPAC Award winner Kevin Barry is in Two Thirds North journal. George Saunders interview on blog. Dear Life by Alice Munro – review. It is marvellous that winning the Nobel prize spreads the word about Alice Munro. Margaret Atwood. Molly Light returns, oh how simple faith is justified! Fifty-Two Stories » 7. Sunshine Cleaners. Any weekday in Brookline, drivers caught in Beacon Street traffic might see Sergei hurrying along a certain stretch of wet sidewalk. AGNI Online: Man from Allston Electric by Daphne Kalotay. AGNI Online: Calamity by Daphne Kalotay. They had been in the air for less than an hour when Rhea heard a popping sound. It seemed to come from outside, maybe from one of the wings, and though it wasn’t anything Rhea had ever heard before, she knew instinctively that it was a bad sound. “Did you hear that?”