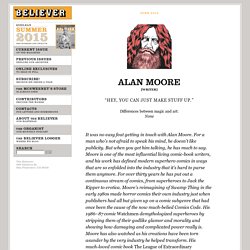 For a man who’s not afraid to speak his mind, he doesn’t like publicity. But when you get him talking, he has much to say. Moore is one of the most influential living comic-book writers, and his work has defined modern superhero comics in ways that are so enfolded into the industry that it’s hard to parse them anymore. For over thirty years he has put out a continuous stream of comics, from superheroes to Jack the Ripper to erotica.

Moore’s reimagining of Swamp Thing in the early 1980s made horror comics their own industry just when publishers had all but given up on a comic subgenre that had once been the cause of the now much-belied Comics Code. George Orwell’s ‘Diaries’ Nietzsche Is Dead. Count Harry Kessler received the news in the officers’ mess of his army regiment from a fellow officer going through dispatches. On October 25, 1900, Friedrich Nietzsche, who had famously announced the death of God, had himself died. During the previous decade, Nietzsche’s writings had taken German culture by storm. One of Kessler’s friends joked that “six educated Germans cannot come together for a half hour without Nietzsche’s name being mentioned.”

Nietzsche had become a hero—and cult figure—to those who wanted to reimagine Germany; and a villain to those who remained attached to Germany’s Protestant roots and traditional order. George Orwell - The Orwell Prize. Glitch in the Matrix: Report your Glitch! Interview w DFW. Context N°21 Shimon Ballas. 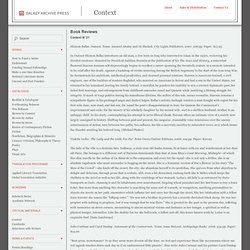 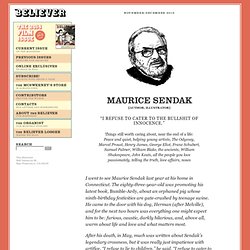 The eighty-three-year-old was promoting his latest book, Bumble-Ardy, about an orphaned pig whose ninth-birthday festivities are gate-crashed by teenage swine. He came to the door with his dog, Herman (after Melville), and for the next two hours was everything one might expect him to be: furious, caustic, darkly hilarious, and, above all, warm about life and love and what matters most. After his death, in May, much was written about Sendak’s legendary crossness, but it was really just impatience with artifice. “I refuse to lie to children,” he said. —Emma Brockes.

Harper's Magazine: Tense Present. A Dictionary of Modern American Usage, by Bryan A. 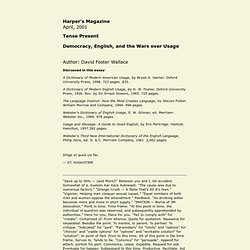 Garner. Oxford University Press, 1998. 723 pages. $35. A Dictionary of Modern English Usage, by H. W. Fowler. The Language Instinct: How the Mind Creates Language, by Steven Pinker. DAVID FOSTER WALLACE DEMOLISHED. Raymond Chandler. Susan Sontag on the Creative Purpose of Boredom. Sontag In Which We Experience The Pain Of Susan Sontag. Photo by annie leibovitz Frantically Impure by ALEX CARNEVALE The problem for me is to transfer a detached intellectual skepticism into a way of harmonious all-around living. 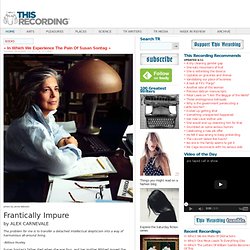 -Aldous Huxley Susan Sontag's father died when she was four, and her mother Mildred moved the sad family to Tucson. Her mother remarried. She wrote in her journal: I believe: (a) That there is no personal god or life after death (b) That the most desirable thing in the world is freedom to be true to oneself, i.e. (c) That the only difference between human beings is intelligence (d) That the only criterion of an action is its ultimate effect on making the individual happy or unhappy (e) That it is wrong to deprive any man of life. 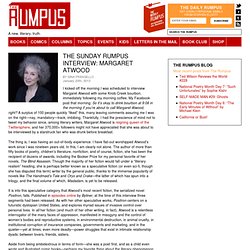 My Facebook post that morning: So it’s okay to drink bourbon at 9:08 in the morning if you’re about to call Margaret Atwood, right? 30 Free Essays & Stories by David Foster Wallace on the Web. The Simple Art of Murder R Chandler. Fiction in any form has always intended to be realistic. 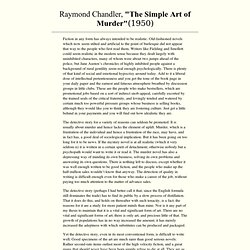 Old-fashioned novels which now seem stilted and artificial to the point of burlesque did not appear that way to the people who first read them. Writers like Fielding and Smollett could seem realistic in the modern sense because they dealt largely with uninhibited characters, many of whom were about two jumps ahead of the police, but Jane Austen’s chronicles of highly inhibited people against a background of rural gentility seem real enough psychologically. There is plenty of that kind of social and emotional hypocrisy around today. Add to it a liberal dose of intellectual pretentiousness and you get the tone of the book page in your daily paper and the earnest and fatuous atmosphere breathed by discussion groups in little clubs. The detective story for a variety of reasons can seldom be promoted.

Yet the detective story, even in its most conventional form, is difficult to write well. Raymond Carver. Raymond Clevie Carver, Jr. 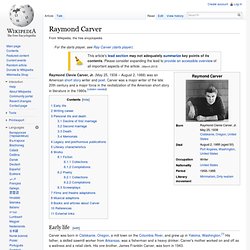 (May 25, 1938 – August 2, 1988) was an American short story writer and poet. Carver was a major writer of the late 20th century and a major force in the revitalization of the American short story in literature in the 1980s. [citation needed] Early life[edit] Exclusive Clip: Philip Roth on His Writing Process (Video) Ten Who Left Us: Select Literary Obituaries from 2013. In 2013 we lost two Nobel laureates, a revered editor and teacher, plus writers of crime fiction, literary fiction, poetry, history, essays, biographies, screenplays, mega-bestsellers, movie criticism, and memoirs. 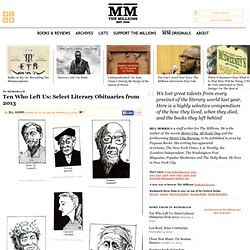