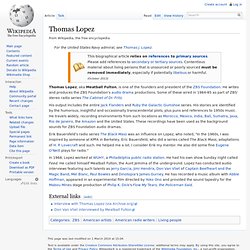 He writes and produces the ZBS Foundation's audio drama productions. Some of these aired in 1984-85 as part of ZBS' stereo radio series The Cabinet of Dr. Fritz. Profiles - Tom Lopez. Roger Gregg of Ireland's Crazy Dog Audio Theatre talks to Tom Lopez of ZBS. 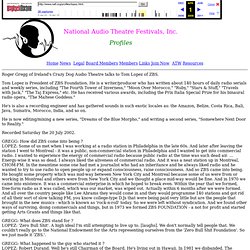 Tom Lopez is President of ZBS Foundation. He is a writer/producer who has written about 140 hours of daily radio serials and weekly series, including "The Fourth Tower of Inverness," "Moon Over Morocco," "Ruby," "Stars & Stuff," "Travels with Jack," "The Taj Express," etc. He has received various awards, including the Prix Italia Special Prize for his binaural radio opera, "The Maltese Goddess. " He's is also a recording engineer and has gathered sounds in such exotic locales as: the Amazon, Belize, Costa Rica, Bali, Java, Sumatra, Morocco, India, and so on. He is now editing/mixing a new series, "Dreams of the Blue Morpho," and writing a second series, "Somewhere Next Door to Reality.

" Recorded Saturday the 20 July 2002. GREGG: How did ZBS come into being ? GREGG: What does ZBS stand for ? GREGG: What happened to the guy who started it ? GREGG: Do you actually mean 'Commune' ? GREGG: Yeah. GREGG: Oh ? About Orwell. Welcome to the Orwell Prize’s library of works about George Orwell and his work (and a few things about the Prize), consisting of material exclusive to this site and links to external sites. 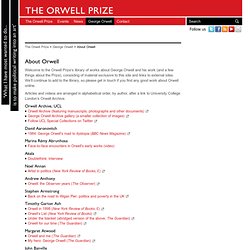 We’ll continue to add to the library, so please get in touch if you find any good work about Orwell online. Articles and videos are arranged in alphabetical order, by author, after a link to University College London’s Orwell Archive. Orwell Archive, UCL David Aaronovitch. Walt Whitman. Walter "Walt" Whitman (/ˈhwɪtmən/; May 31, 1819 – March 26, 1892) was an American poet, essayist and journalist. 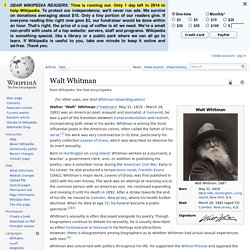 A humanist, he was a part of the transition between transcendentalism and realism, incorporating both views in his works. Whitman is among the most influential poets in the American canon, often called the father of free verse.[1] His work was very controversial in its time, particularly his poetry collection Leaves of Grass, which was described as obscene for its overt sexuality. William H. Gass. Life[edit] William Howard Gass was born on July 30, 1924, in Fargo, North Dakota. 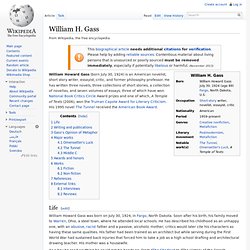 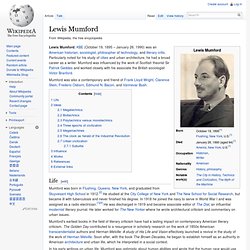 Particularly noted for his study of cities and urban architecture, he had a broad career as a writer. Mumford was influenced by the work of Scottish theorist Sir Patrick Geddes and worked closely with his associate the British sociologist Victor Branford. Life[edit] Mumford was born in Flushing, Queens, New York, and graduated from Stuyvesant High School in 1912.[2] He studied at the City College of New York and The New School for Social Research, but became ill with tuberculosis and never finished his degree.

In 1918 he joined the navy to serve in World War I and was assigned as a radio electrician.[1][3] He was discharged in 1919 and became associate editor of The Dial, an influential modernist literary journal. Mumford's earliest books in the field of literary criticism have had a lasting impact on contemporary American literary criticism. Blog for Morris Berman. Vanessa Veselka. In 2013, she was a chosen as a MacDowell Fellow, and her November 2012 GQ piece entitled "The Truck Stop Killer" is part of the 2013 edition of Best American Essays.[6] Personal life[edit] Veselka's bio says she has been "a teenage runaway, a sex-worker, a union organizer, and a student of paleontology. 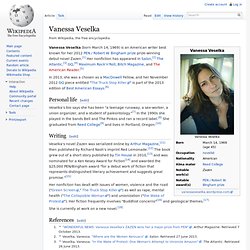 "[7] In the 1990s she played in the bands Bell and The Pinkos and ran a record label.[8] She graduated from Reed College[9] and lives in Portland, Oregon.[10] Writing[edit] Veselka's novel Zazen was serialized online by Arthur Magazine,[11] then published by Richard Nash's imprint Red Lemonade.[12] The book grew out of a short story published by Tin House in 2010,[13] and was nominated for a Ken Kesey Award for Fiction[14] and awarded the $25,000 PEN/Bingham award "for a debut work of fiction that represents distinguished literary achievement and suggests great promise. John Perkins on Globalization. Jane McAlevey. Jane F. 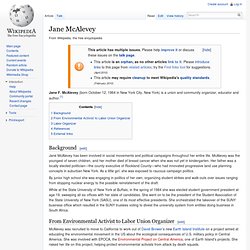 David Simon. David Simon (born 1960) is an American author, journalist, and a writer/producer of television series. 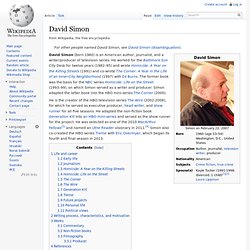 He worked for the Baltimore Sun City Desk for twelve years (1982–95) and wrote Homicide: A Year on the Killing Streets (1991) and co-wrote The Corner: A Year in the Life of an Inner-City Neighborhood (1997) with Ed Burns. The former book was the basis for the NBC series Homicide: Life on the Street (1993–99), on which Simon served as a writer and producer. Simon adapted the latter book into the HBO mini-series The Corner (2000). Ed Burns. Biography[edit] Burns served in the infantry during the Vietnam War.[2] He then served in the Baltimore Police Department for twenty years.[2] Following his retirement from the police force he became a teacher in the Baltimore public school system.[2] Burns has said that he stumbled into teaching with little preparation because of the intense demand for teachers in inner-city schools.[2] Burns taught seventh grade. 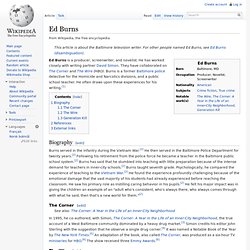 Psychologically, he compared the experience of teaching to the Vietnam War.[2] He found the experience profoundly challenging because of the emotional damage that the vast majority of his students had already experienced before reaching the classroom. He saw his primary role as instilling caring behavior in his pupils.[2] He felt his major impact was in giving the children an example of an "adult who's consistent, who's always there, who always comes through with what he said, then that's a new world for them.

Audre Lorde. Audre Lorde (born Audrey Geraldine Lorde, February 18, 1934 – November 17, 1992) was a Caribbean-American writer, radical feminist and civil rights activist. Life and work[edit] Born Audrey Geraldine Lorde, she chose to drop the "y" from her first name while still a child, explaining in Zami: A New Spelling of My Name that she was more interested in the artistic symmetry of the "e"-endings in the two side-by-side names "Audre Lorde" than in spelling her name the way her parents had intended.[2] [3] After graduating from Hunter College High School and experiencing the grief of her best friend Genevieve "Gennie" Thompson's death, Lorde immediately left her parents' home and became estranged from her family.

She attended Hunter College from 1954 to 1959 and graduated with a bachelor's degree. Pat Parker. Pat Parker (January 20, 1944 – June 19, 1989 Houston, Texas) was an African-American lesbian feminist poet.[2][3] Early life[edit] Parker grew up working class poor in Third Ward, Houston, Texas,[4] a mostly African-American part of the city. Delmore Schwartz. Delmore Schwartz (December 8, 1913 – July 11, 1966) was an American poet and short story writer. Biography[edit] Schwartz was born in 1913 in Brooklyn, New York, where he also grew up. His parents, Harry and Rose, both Romanian Jews, separated when Schwartz was nine, and their divorce had a profound effect on him.

In 1930, Schwartz's father suddenly died at the age of 49. Though Harry had accumulated a good deal of wealth from his dealings in the real estate business, Delmore only inherited a small amount of that money as the result of the shady dealings of the executor of Harry's estate. Schwartz spent time at Columbia University and the University of Wisconsin before finally graduating from New York University in 1935. Edward Said. Edward Wadie Said (Arabic pronunciation: [wædiːʕ sæʕiːd]; Arabic: إدوارد وديع سعيد‎, Idwārd Wadīʿ Saʿīd; 1 November 1935 – 25 September 2003) was a professor of English and Comparative Literature at Columbia University, a literary theorist, and a public intellectual who was a founding figure of the critical-theory field of Post-colonialism.

Born a Palestinian Arab in the city of Jerusalem in Mandatory Palestine (1920–48), he was an American citizen through his father.[3] Said was an advocate for the political and the human rights of the Palestinian people and has been described by the journalist Robert Fisk as their most powerful voice.[4] As a public intellectual, Said discussed contemporary politics and culture, literature and music in books, lectures, and articles. Biography Early life Edward and his sister Rosemarie (1940)

Jimmy Santiago Baca. Junot Díaz. Junot Díaz (born December 31, 1968) is a Dominican-American[1] writer, creative writing professor at Massachusetts Institute of Technology (MIT), and fiction editor at Boston Review. He also serves on the board of advisers for Freedom University, a volunteer organization in Georgia that provides post-secondary instruction to undocumented immigrants.[2] Central to Díaz's work is the immigrant experience.[3] He received the Pulitzer Prize for Fiction for his novel The Brief Wondrous Life of Oscar Wao, in 2008. Henry Miller Recalls and Reflects [Interview 1956] (1/9) Anaïs Nin on Lou Salome Nietzsche. Lou Andreas-Salomé. Spalding Gray.

His literal interpretation of the ethical teachings of Jesus, centering on the Sermon on the Mount, caused him to become a fervent Christian anarchist and pacifist.

The H.P. Lovecraft Archive. Kurt Vonnegut. Philip K. Dick. Personal life[edit] The family moved to the San Francisco Bay Area. Anthony Burgess. John Anthony Burgess Wilson, FRSL (/ˈbɜrdʒəs/; 25 February 1917 – 22 November 1993) – who published under the pen name Anthony Burgess – was an English writer and composer. From relatively modest beginnings in a Manchester Catholic family in the North of England, he eventually became one of the best known English literary figures of the latter half of the twentieth century.