Creative Writing Exercises: Make a Book Journal and Fill it with Discoveries! 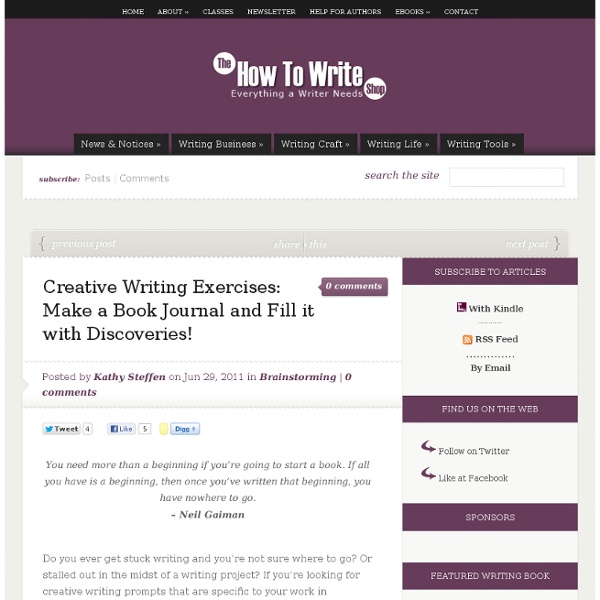 You need more than a beginning if you’re going to start a book. If all you have is a beginning, then once you’ve written that beginning, you have nowhere to go. – Neil Gaiman Do you ever get stuck writing and you’re not sure where to go? Or stalled out in the midst of a writing project? If you’re looking for creative writing prompts that are specific to your work in progress, read on! Even if I think through the major parts of my WIP (work in progress), I sometimes find myself in need of additional inspiration and writing ideas. In addition to collecting photos, snippets of ideas, sketches and maps of my fictional towns in my journal, I use writing exercises to get me going. Listen to your character: I ask a specific character how he or she feels about what happened in the last scene. If you are really feeling brave and want to walk a mile in your character’s shoes, answer out loud in her/his voice. Character monologue: now it’s really time to be brave.

Write to Done Arouse your creativity Electric flesh-arrows … traversing the body. A rainbow of color strikes the eyelids. Creativity is like sex. I know, I know. The people I speak of are writers. Below, I’ve exposed some of their secret tips, methods, and techniques. Now, lie back, relax and take pleasure in these 201 provocative ways to arouse your creativity. Great hacks from Merlin Mann of 43 Folders Write or Die by Dr Wicked | Putting the 'Prod' in Productivity 50 of the Best Websites for Writers There are tons of reference sites on the web that can help you find a job or write a poem, essay or story. Here is a list of the best 50 websites for writers. Reference Websites Merriam-Webster Online - Merriam Webster is the perfect place to look up words and find information. General Writing Websites Writer's Digest - Probably one of the best all-around websites for writers, Writer's Digest offers information on writing better and getting published. Fiction Writing Websites About.com - About.com publishes a Guide to Fiction Writing with general information about fiction writing and a number of community forums for both current and aspiring writers. Nonfiction Writing Websites Bella Online - This site offers a large collection of resources for nonfiction writers. Websites for Freelance Writers and Authors Media Bistro - This site is a good place to find freelance jobs online.

Best Creative Writing Exercises (PHOTOS) Writers block, oh, writers block ...please go away! Even though it's the bane of all writers' existence, there are a bevy of ways to bypass the darn thing. From writing prompts to writing exercises, there are thousands of ways to get the creative juices flowing. Here are just a few of our favorites. Loading Slideshow 7x7x7x7Grab the 7th book from your bookshelf. Best Creative Writing Exercises 1 of 10 Hide Thumbnails Thirteen Writing Prompts. [Originally published May 4, 2006.] Write a scene showing a man and a woman arguing over the man’s friendship with a former girlfriend. Do not mention the girlfriend, the man, the woman, or the argument. Write a short scene set at a lake, with trees and shit. Throw some birds in there, too. Choose your favorite historical figure and imagine if he/she had been led to greatness by the promptings of an invisible imp living behind his or her right ear. Write a story that ends with the following sentence: Debra brushed the sand from her blouse, took a last, wistful look at the now putrefying horse, and stepped into the hot-air balloon. A wasp called the tarantula hawk reproduces by paralyzing tarantulas and laying its eggs into their bodies. Imagine if your favorite character from 19th-century fiction had been born without thumbs. Write a story that begins with a man throwing handfuls of $100 bills from a speeding car, and ends with a young girl urinating into a tin bucket.

Creative Writing Prompts Write a scene that includes a character speaking a different language, speaking in a thick accent, or otherwise speaking in a way that is unintelligibe to the other characters. (Note: You don't necessarily need to know the language the character is speaking—be creative with it!) Describe a character's reaction to something without explaining what it is. See if your fellow prompt responders can guess what it is. Write a story or a scene about one character playing a prank on another. Writing Prompt: Write a story that involves confusion over homonyms (words that have the same spelling but different meanings) or homophones (words that sound the same but are spelled differently). For World Storytelling Day, share the best story you've ever heard or told by word of mouth, or have a fictional character recount their favorite story. You're making your way down a cobbled street when a stocky, red-bearded man beckons you into an alley. Consider your handwriting, or a character's handwriting.