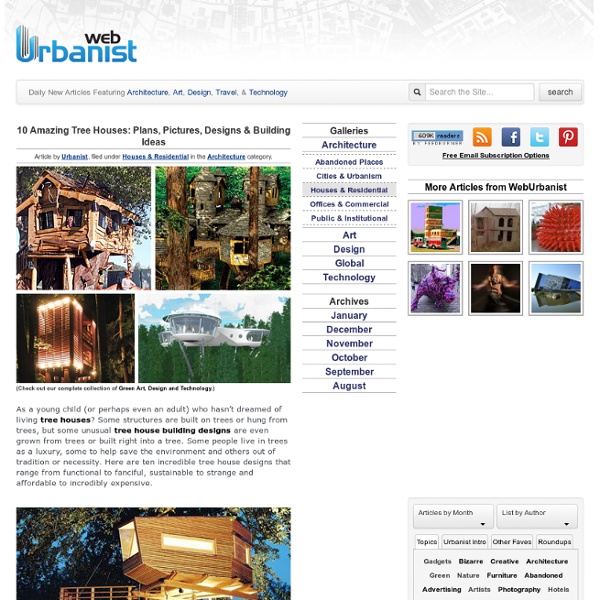 10 Amazing Tree Houses: Plans, Pictures, Designs, Ideas & Kits Article by Urbanist, filed under Houses & Residential in the Architecture category. As a young child (or perhaps even an adult) who hasn’t dreamed of living tree houses? Some structures are built on trees or hung from trees, but some unusual tree house building designs are even grown from trees or built right into a tree. Some people live in trees as a luxury, some to help save the environment and others out of tradition or necessity. Here are ten incredible tree house building designs and ideas that range from functional to fanciful, sustainable to strange and affordable to incredibly expensive. Baumraum treehouses blends classic notions of a simple wood structure in a tree with modernist angles, clean lines and other design elements. The mobile, durable and somehow fanciful Free Spirit Spheres can be hung from anything from trees to buildings and rock faces. , interesting tree houses in the United States

Treehouse Escapes Bring Owners Closer to Nature The Denver Post Most kids dream of a having a tree house, and even some adults. But the popularity of treehouses is booming with companies across the country building custom tree house escapes for those wanting to spend more time "outside".TreeHouse Workshop is a Seattle construction company that builds cozy tree houses all over the Pacific North West. In fact for them, treehouses have become so popular that they have built more than 100 structures in the past few years.

New Zealand’s Whimsical Yellow Treehouse Restaurant The Yellow Treehouse Restaurant by New Zealand based Pacific Environments Architects Ltd. (PEL) is a stunning architectural feat perched high above a redwood forest. Appearing for all the world like an enormous chrysalis grafted onto a 40-meter-high redwood tree, the project is constructed of plantation poplar slats, redwood balustrading milled at the site, and it makes extensive use of natural lighting throughout. When approached by the Yellow Pages to design a treehouse, PEL jumped at the chance.

Eye Candy - Tasty Animation » Profile Highly acclaimed art director, designer and business person Pawl Cubbin has been responsible for the development of some of Canberra’s most successful businesses, including high profile communications agency ZOO, Rex airlines and Academy Night Club. As a designer his achievements include the creation of many nationally recognised brands, including Regional Express Airlines, the Brumbies, TransACT, Masters Games, Floriade, Department of Family and Community Services, Verve Restaurant, Master Builders Australia and the Old Bus Depot Markets. His work has won many awards, including a prestigious Silver Award at the New York Advertising Festival and was also named Canberra Graphic Design Industry Individual of the Year in 2000. As CEO of ZOO and CubbinCo, Pawl has been able to build his businesses by effectively analysing business processes and providing each company with the business tools and systems needed to deliver the best outcome for clients and owners. Email Pawl

World’s Largest Treehouse Cost $7 Million To Build Like something out of a fairy tale — and seriously, even the main character’s name is Lord Northumberland — this 6,000 sq ft. tree house is the world’s largest. Located on the grounds of Alnwick Gardens , about 95 miles north south of Edinburgh, Scotland, the leviathan soars 56ft. above the ground and is connected with 4,000-square-feet of suspended walkways. There’s even a 120-seat restaurant — as well as wobble bridges, classrooms, turrets, and God knows what else. Naturally, this building was also built sustainably with the website saying Canadian Cedar, Scandinavian Redwood and English and Scots pine were all used in construction. Unfortunately, it appears that most of those were imported, so no points for you!

fuck yeah treehouses! fuck yeah treehouses! For the love of treehouses. Submit? World’s Tallest Tree House The next piece of home design is truly mind-blowing. When you first mention a tree-house to someone, they expect you present a small structure not a four-level high jaw-dropping structure. The awesome tree-house featured here took almost 11 years to complete. THE SLIFR MOVIE TREE HOUSE #1: INTRODUCTIONS Jim, Sheila, Jason: Welcome, all, to the inaugural edition of the SLIFR Movie Tree House, one which I hope will become an annual tradition in the style of a certain other yearly gathering of movie-oriented brains to both celebrate and perform an autopsy on the film year just past. But before I introduce this year’s participants, a word about the name of our enterprise would probably be, if nothing else, at least good form.

Kid Builds Bicycle Powered Elevator for his DIY Tiny Treehouse Cabin on March 15, 2014 I just had to show you this amazing DIY bicycle powered elevator built for this tiny tree house cabin that’s up in air. Ethan got sick of climbing the ladder dozens of times a day to and from his self-built treehouse. So he did what anyone who owns a self-built treehouse would do… Build a cheap DIY elevator out of a bicycle. The Treehouse That Your Dad Didn't Build For You My fascination for the tree house may have stemmed from the fact that like many other children I grew up with NO tree house, though I'm sure all the children who have grown up with a tree house have a fascination towards the tree house because they had grown up with one. There's just no escaping it! The tree house is cool.

Terrific Treehouses: 10 Brilliant Topiary Masterpieces Terrific Treehouses: 10 Brilliant Topiary Masterpieces It’s inescapable– the urge to walk away from our civilized lives and find peace in nature. For every cubicle and cookie cutter suburb, there’s a man or a woman who desires for an escape to our natural roots. Treehouse living has been the dream of many since childhood, and to celebrate our drive to escape here are 10 of the very best treehouses in the modern world. 02 Sustainability Treehouse