'Woodnest' Cabins Are Tiny Tree Houses in This Norwegian Forest. The Woodnest cabins are a modern getaway hidden amongst the trees in Odda, Norway. 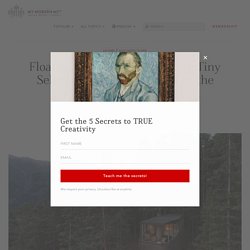 Each abode sits perched on a single tree and attaches to the trunk via a steel collar. This eliminates the need for additional structures below, and all that's visible is the still-growing pine tree that pierces the cabins. This minimally invasive approach was carefully designed by Helen & Hard Architects to respect the existing land and steep topography. 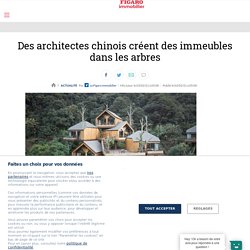 The project, known as Tree in the house, presents a cylindrical, four-story glass space featuring an encased tree in the center. A winding white staircase allows visitors who enter the “tree house” to ascend the towering space, spiraling upward around the centric tree. The intention behind the transparent architectural structure, tucked away in a sea of lofty fir trees, is to merge manmade industrial design with nature and “give up some unnecessary conditions and things.” 33 DIY Tree House Plans & Design Ideas for Adult and Kids (100% Free) (1) Facebook. (1) Facebook. Translucent Home Built Around a Tree in a Kazakh Forest. TREEHOUSES, Cabanes perchées. Happiest treehouse I most particularly... - Build Naturally with Sigi Koko.

Someone emailed me this week wondering... - Build Naturally with Sigi Koko. Boatmaker blends math & craft in his hanging treehouse spheres. Kid Builds Bicycle Powered Elevator for his DIY Tiny Treehouse Cabin. On March 15, 2014 I just had to show you this amazing DIY bicycle powered elevator built for this tiny tree house cabin that’s up in air. 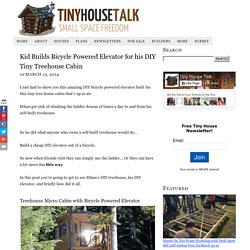 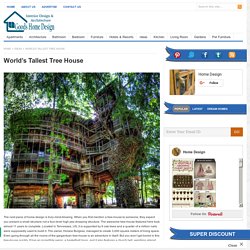 When you first mention a tree-house to someone, they expect you present a small structure not a four-level high jaw-dropping structure. The awesome tree-house featured here took almost 11 years to complete. Located in Tennessee, US, it is supported by 6 oak trees and a quarter of a million nails were supposedly used to build it. The owner, Horace Burgess, managed to create 3,000 square meters of living space. Treehouse Escapes Bring Owners Closer to Nature The Denver Post. Most kids dream of a having a tree house, and even some adults. 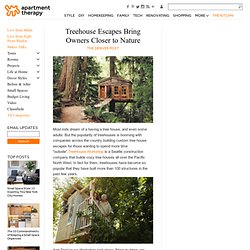 But the popularity of treehouses is booming with companies across the country building custom tree house escapes for those wanting to spend more time "outside".TreeHouse Workshop is a Seattle construction company that builds cozy tree houses all over the Pacific North West. In fact for them, treehouses have become so popular that they have built more than 100 structures in the past few years. 10 Amazing Tree Houses: Plans, Pictures, Designs & Building Ideas. 10 Amazing Tree Houses: Plans, Pictures, Designs, Ideas & Kits Article by Urbanist, filed under Houses & Residential in the Architecture category. 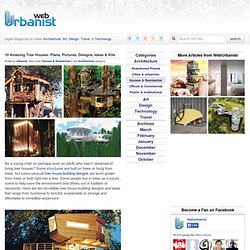 As a young child (or perhaps even an adult) who hasn’t dreamed of living tree houses? Some structures are built on trees or hung from trees, but some unusual tree house building designs are even grown from trees or built right into a tree. Some people live in trees as a luxury, some to help save the environment and others out of tradition or necessity. Here are ten incredible tree house building designs and ideas that range from functional to fanciful, sustainable to strange and affordable to incredibly expensive.

World’s Largest Treehouse Cost $7 Million To Build. Like something out of a fairy tale — and seriously, even the main character’s name is Lord Northumberland — this 6,000 sq ft. tree house is the world’s largest. Located on the grounds of Alnwick Gardens , about 95 miles north south of Edinburgh, Scotland, the leviathan soars 56ft. above the ground and is connected with 4,000-square-feet of suspended walkways. There’s even a 120-seat restaurant — as well as wobble bridges, classrooms, turrets, and God knows what else. Naturally, this building was also built sustainably with the website saying Canadian Cedar, Scandinavian Redwood and English and Scots pine were all used in construction. 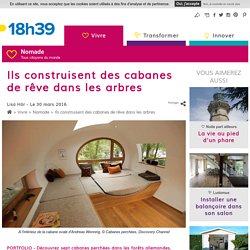 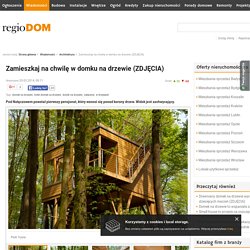 Widok jest zachwycający. How to Build a Treehouse. Baumraum. Baumraum plans and builds inspiring dwellings for children and adults – from small playhuts for games and activities to exclusive permanent abodes. baumraum designs unique constructions for private clients as well as commercial enterprises in the hotel and catering sector and in tourism and leisure, but specializes in the design and construction of treehouses. 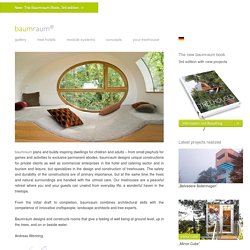 The safety and durability of the constructions are of primary importance, but at the same time the trees and natural surroundings are handled with the utmost care. Our treehouses are a peaceful retreat where you and your guests can unwind from everyday life, a wonderful haven in the treetops. From the initial draft to completion, baumraum combines architectural skills with the competence of innovative craftspeople, landscape architects and tree experts. 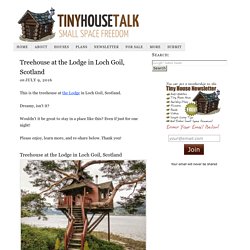 Dreamy, isn’t it? DomUp Treehouse. Embryo Treehouse by Antony Gibbon Takes Biomimicry to New Heights. Popular treehouse designer Antony Gibbon is at it again. Antony Gibbon Designs has produced a new treehouse design, The Embryo, which is a cylindrical two-story tree structure that almost looks like an extension of the tree trunk, like a burl. This image reinforces the notion that our homes should be an extension of Mother Nature. “The Embryo derives its name from the early stages of development in nature and how we need to re address the way we live in today’s society that is more ecological and simpler way of living than consuming our earth’s resources,” explains Gibbon. “We are more and more being disconnected from our natural surroundings and the embryo is part of a series of designs to try and reunite and reconnect us back to the elements and how we interact with nature, whilst using materials resourcefully.”

The entrance to The Embryo is similar to its predecessors. A Tree House That Is Both A Hotel And A Natural Sanctuary. Seven years ago the founders of Finca Bellavista Mateo along with Erica Hogan, visited for the first time the property that would turn today into their home away from home. This construction is located in the heights of the tropical forest in Costa Rica, surrounded by foliage and all kinds of plants and animals.

This hideout is built along the tops of the trees, like a sanctuary in the middle of a sancturary. With the idea of creating a true self sustained community, the project started by buying the land with that idea of sustainability in mind. The name is inspired by the picturesque river called Bellavista, with beautiful white waters, surrounded by abundant green where people can take a daily plunge and enjoy its currents. Their goal was to integrate the structure in the landscape, the tree tops create the border of these structures where people can stay and live different experiences surrounded by nature and Costa Rica's beautiful spaces. via LaBioGuía Recent articles.

Tree house. A home on wheels: 15 converted buses we love. Inside the 1978 Bluebird Bus. Photo: Ralph Barrera As property prices soar around the globe, people are being forced to think outside the square when it comes to where they live. Tiny houses are becoming increasingly popular, and a new sub-category of this movement is gaining popularity: the converted bus. Generally speaking, Australians are yet to embrace the converted bus option. Treehouses by takashi kobayashi, japan. Takashi kobayashi is a self-taught designer that has brought treehouse vernacular to the japanese landscape. the carpenter and architect of 120 houses throughout japan, his prolificness is borne of a deep-seated investment in the creation of a new architectural tradition in his country added to the hefty, overall aim of each project- to erode the boundary between man and nature. using reclaimed wood, the designer and his collective treehouse people have developed methods since the first building in 1993 for the arboreal structures balanced on living boughs and limbs that avoid stunting the growth of the tree. stained glass facade complements the wood form image © treehouse people eleavation view image © treehouse people.

THROUGH THE LENS with Rob Machado - Taka's Treehouse. ECO EWOK TREEHOUSES: Finca Bellavista Rainforest Village Finca Bellavista - Gallery Page 7. Tree Houses! From the past into the future... Tree Houses! From the past into the future... In the future, will we give back the land to native plants and animals and live up in the trees? Hovering aircraft are available now, we just need to wait for the clean energy versions. If we compost our waste, give up plastics and petroleum, grow hydrophonically...what would our new footprint be? Treehouse design: Inspiring Treehouse Ideas - Busyboo - Page 1. Romantic Yurt-style Tree House. Solceller på taket ska täcka hela energibehovet - Byggahus.se. Reduce tree damage.

If a treehouse is designed poorly it is easy to cause damage to the tree, but by following some simple guidelines you can minimise damage as much as possible. It is impossible to cause no damage at all, but trees have evolved several techniques to tolerate damage and remain healthy. As trees are living organisms, they differ from familiar building materials in the following four ways. They can be infected by bacteria and viruses, causing loss of branches or death to the whole tree They slowly grow larger over time, increasing the diameter of their trunk every year They use a process called compartmentalisation to isolate damaged or infected areas They will compensate for a changed weight distribution. Design reference. Designs. Plan+build advice. How to 2. Steps. A field guide. We finished Irena's version 2.0 tree house this weekend. The kids and I have been working on it for 3 weekends, and this is as far as it's going to go this round.

Have fun. Treehouses are fantastically exciting places for children to play. They conjure up Just William like images of muddy boots, scraped knees, and shining happy faces of kids having countless adventures outdoors in the fresh air. Guide 2. How to 3. How to. Amazing High-Tech Treehouses. Whimsical Treehouse Cabin at Swallowtail. It Looks Like A Child’s Tree House…Then I Opened The Door And Saw What Was Inside. OMG!! Romantic tiny forest home built in 6 weeks for $4,000. Beautiful Tiered Treehouse Looks Like a Japanese-Style Pagoda. Roost Treehouse. Roomoon: Awesome Moon-Shaped Treehouse Tents are Perfect for Summer Glamping. Wildwechsel - allergutendinge. Finca Bellavista: Highflying Treehouses Nestled in the Rainforest Canopy.

Tiny Baobed Treehouse is a Cocoon-Like Sleeping Pod for Adventure Seekers. 9 Brilliant Backwoods Cabin Concepts to Reconnect You with Nature. Live in Harmony with Nature in These Super Sexy Tree House Cabins by Bower House. 10 Most Precariously Placed Treehouses on Earth. From brick and mortar shops to city planning, we cover sustainable trends in construction, renovation, and more.