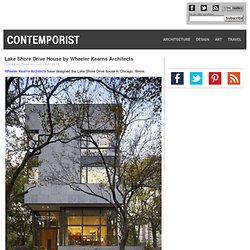 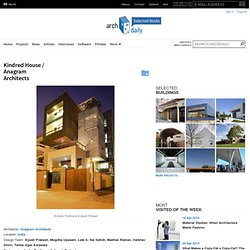 Sai Satish, Madhav Raman, Vaibhav Dimri, Tarika Jigar Asrawala Photographs: Andre Fanthome & Ayush Prakash Kindred House was conceived as the residence for two brothers and their families. Unlike a traditional Indian joint family which usually span three or more generations and tend to have strict filial hierarchies, the clients, in this project, are kindred nuclear families.

Therefore, the design called for multiple social spaces of overlapping territori alities and usage along with specific zones for each family unit and member. It sought to house an environment where the teenaged cousins were together fostered by the four parents. Taking a cue from the kinship between the two families, the design sought to create internal and external residential spaces for the families by evolving close and nuanced volumetric relationships between built masses. 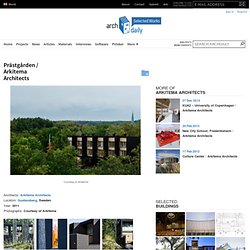 The dwellings are subdivided into four groups of two storey row houses. The Prästgården development is situated tranquilly at the top of a rocky area with views towards an undulating landscape and pine forest on all sides. A special spot for a series of special buildings that have been carefully placed in a dialogue with the landscape, and with steep slopes and their differences worked into the lay out of the development resulting in a dramatic variation of the individual houses.

Each dwelling is framed and characterized by a characteristic black frame that varies with the terrain down each row, creating small terraces and big balconies. Two Houses / Zerodegree Architecture. Architect: Yushi Uehara / Zerodegree Architecture Location: Lonekeer Spoorlaan, Enschede, The Netherlands Completion: 2004-2009 Photographs: Jeroen Musch Today’s Roombeek is different from the working-class district of before the fireworks explosion that destroyed much its fabric. 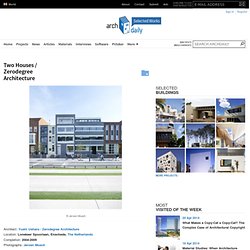 Although the structure takes its cue form the old layout, the new Roombeek differs both spatially and socially from the old one. There is now social diversification in the district, with a lot more houses in the upper price bracket, many of them built by owner occupiers. Some of these private clients have built freestanding houses on plots that are only fractionally larger than the footprint of the houses. A row of houses has also been built along the district’s central green zone.

The spatial masterplan for the reconstruction of Roombeek was drawn up by Pi de Bruijn of de Architekten Cie., one of the firms for which Uehara worked before setting up his own practice. Urban Townhouse / GLUCK+ Architects: GLUCK+ Location: New York, USA Project Team: Guido Furlanello, Peter L. 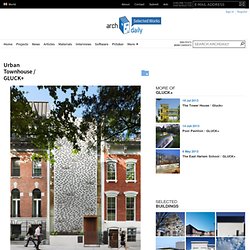 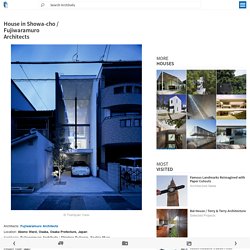 Showa-cho is a quiet place even though it is downtown. There are many people residency from a long time ago. The design of the residence has a narrow frontage, which is a part of a row house (17.89m x 3.94m). Berri Residence / NatureHumaine. Architects: NatureHumaine Location: Montréal, Quebec, Canada Team: Stephane Rasselet, Marc-Andre Plasse, Amelie Melaven Year: 2012 Photographs: Adrien Williams A couple with a passion for contemporary architecture wanted an extension to their 1940s duplex on Berri street in Montréal. 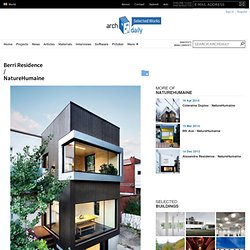 Their main desire was to create a dining room that would become the heart of the house, where family discussions would take place. At the center of the new extension is the dining room just off the re-modeled kitchen on the ground floor. It has generous south-facing glazing and and a large dining table at its center. 23 Town Houses in Amsterdam / Atelier Kempe Thill. Kwidzyn Old Town Housing Proposal / Perspektywa. The second prize winning design by Perspektywa for the Kwidzyn Old Town Housing Units in Poland answers to the competition challenge with their modern architecture with classic elements. 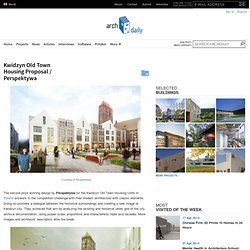 Doing so provides a dialogue between the historical surroundings and creating a new image of Kwidzyn city. They achieved that aim by analyzing the existing and historical urban grid of the city, archival documentation, using proper scale, proportions and characteristic triple axis facades. More images and architects’ description after the break. The main aim of architectural competition for Kwidzyn Old Town was to: fit into existing urban grid, rebuild old town structure, make dialogue between existing Gothic Cathedral and Castle , ruins of City Hall and newly designed housing unit, create a new image of Kwidzyn city balanced between 21 century and the Middle Ages, and connecting new design with existing historical building.