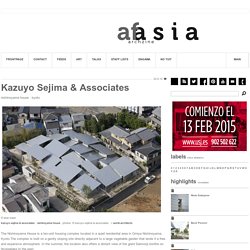 Kyoto © Iwan BaanKazuyo Sejima & Associates . Nishinoyama House . Photos: © Kazuyo Sejima & Associates . + world-architects The Nishinoyama House is a ten-unit housing complex located in a quiet residential area in Omiya Nishinoyama, Kyoto.The complex is built on a gently sloping site directly adjacent to a large vegetable garden that lends it a free and expansive atmosphere. Characterizing the exterior of the building are twenty-one pitched roofs—each roughly the size of the neighboring single-family houses—that come together to form one large roof, looking not unlike a cluster of small traditional machiya houses.Each room is positioned out of alignment with these pitched roofs, creating almost as many small gardens and alleyways underneath the shared roof as there are rooms in the complex. Gian Salis.

House on a Hillside . 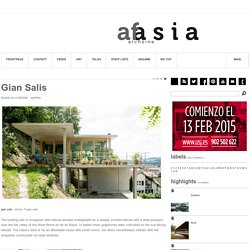 Wyhlen Gian Salis . photos: © Gian Salis The building site is overgrown with natural wooded undergrowth on a steeply inclined hillside with a wide prospect over the flat valley of the River Rhine as far as Basle. In earlier times grapevines were cultivated on the sun-facing hillside. The client’s wish is for an affordable house with small rooms, but which nevertheless interact with the unspoiled countryside via large windows. Based on this topography, two terracing walls – that simultaneously create a tamed territory – form the basic structure of the house, and anchor it in the hillside.

HOUSE G by maxwan. House for Trees. In response to the rapid and near total urbanization of vietnamese cities, Vo Trong Nghia Architects designed a prototypical house as part of an ongoing initiative to reverse the trend. 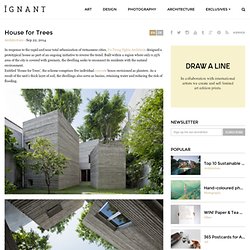 Built within a region where only 0.25% area of the city is covered with greenery, the dwelling seeks to reconnect its residents with the natural environment. Entitled ‘House for Trees’, the scheme comprises five individual concrete boxes envisioned as planters. As a result of the unit’s thick layer of soil, the dwellings also serve as basins, retaining water and reducing the risk of flooding. All images © Vo Trong Nghia Architects | Via: Feeldesain. Villa E. Villa E is a luxury Moroccan home designed by Studio KO. 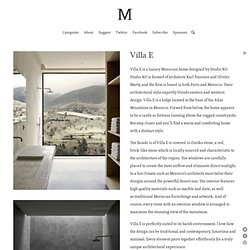 Studio KO is formed of architects Karl Fournier and Olivier Marty, and the firm is based in both Paris and Morocco. Their architectural style expertly blends eastern and western design. Villa E is a lodge located at the base of the Atlas Mountains in Morocco. Viewed from below, the home appears to be a castle or fortress looming above the rugged countryside. But step closer and you’ll find a warm and comforting home with a distinct style. The facade is of Villa E is covered in Ouriko stone, a red, brick-like stone which is locally sourced and characteristic to the architecture of the region. Villa E is perfectly suited to its harsh environment. Atrium House. Tham & Videgård Arkitekter created ‘Atrium House’, a vacation home for a family of three generations on the island of Gotland in the Baltic Sea. 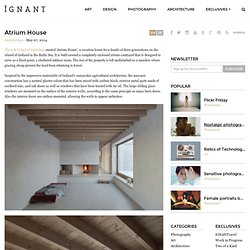 It is built around a completely enclosed atrium courtyard that is designed to serve as a fixed point, a sheltered outdoor room. The rest of the property is left undisturbed as a meadow where grazing sheep prevent the land from returning to forest. Inspired by the impressive materiality of Gotland’s vernacular agricultural architecture, the masonry construction has a natural plaster colour that has been mixed with carbon black, exterior metal parts made of oxidised zinc, and oak doors as well as windows that have been treated with tar oil. 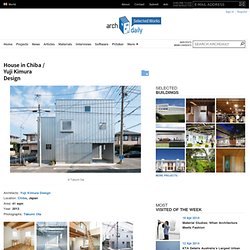 This house is the appearance of a simple box-shaped like factory, and square holes of large and small with a visual rhythm is open at random. mA-style architects : Koya No Sumika. Publié le jeudi 31 octobre 2013. 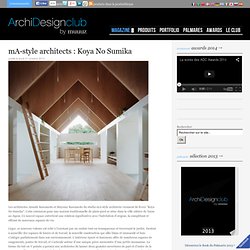 House of The Forest Owls by Bernd Riegger. Called the House of the Forest Owls, this unique cabin in Wolfurt, Austria features many ledges inviting such woodland creatures to make themselves at home. 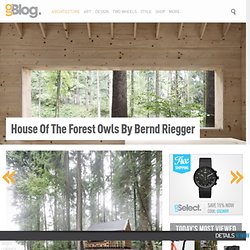 The porch is covered and surrounded by the same design, creating a hollowed outdoor space slightly camouflaged. The interiors’ greatest strength lasts only as far as the grand horizontal window infusing the smallish room with a front seat straight outdoors. Photographs © Adolf Bereuter ABOUT ALLISON PARKER - Allison Parker is a proud stay at home mom maintaining a full schedule kissing boo boos and passing out hugs just because. Her days many times are spent between the garden and the kitchen. Atelier Tekuto. Atelier Tekuto . photos: © Toshihiro Sobajima The site is situated in urbanization controlled area between residential area and farm land. 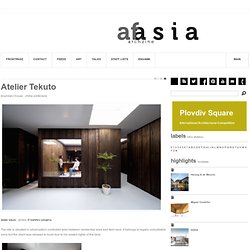 It belongs to legally unbuildable zone but the client was allowed to build due to his vested rights of the land. Portable Minimod. MAPA Architects created MINIMOD which proposes an innovative, intelligent and sustainable alternative of dwelling. 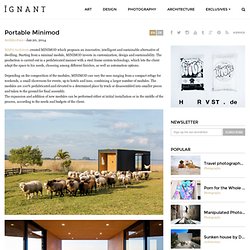 Starting from a minimal module, MINIMOD invests in customization, design and sustainability. The production is carried out in a prefabricated manner with a steel frame system technology, which lets the client adapt the space to his needs, choosing among different finishes, as well as automation options. Depending on the composition of the modules, MINIMOD can vary the uses ranging from a compact refuge for weekends, a small showroom for events, up to hotels and inns, combining a larger number of modules.

The modules are 100% prefabricated and elevated to a determined place by truck or disassembled into smaller pieces and taken to the ground for final assembly. House Unimog. The house Unimog by Fabian Evers and Christoph Wezel combines an industrial hall with a reduced housing unit. To make optimal use of the plot, the architects created a vertical alignment. The resulting division into two can also be found in the facade: the hall is cladded with a lightning-surface which allows to work in a light flooded environment during the day and becomes a luminary in the night.

The living unit with its grey facade seems very compact while large openings and a sheltered loggia offer a great view over the neighboring houses into the green. All images © Sebastian Berger. The Small Box House. The residence ‘Small Box House’ by Shin-ichiro Akasaka was built on the western hillside of Mt. Moiwa, overlooking the city of Sapporo. From the casual lifestyle of the clients and also the request to have a part of the house turned into a cafe in the future, the architects aimed to create a space that would be flexible.

Various life-scenes should be able to exist alongside inside a simple void, like a barn. The floor, handrails, walls, and also curtains are passing the light through and enable the residents to move continuously without any distraction. High Bois Lane House. How many levels of interpretation does a building have? First comes the visible reading of its architecture but if we stop at the shell, the space inside and the design of the fronts we are only seeing it from one angle. Buildings hide stories that, in the most fascinating cases, tell us about people and ideas – not just the architect who conceived a specific construction but the client who wanted it and the people who make use of it. House I / Hiroyuki Shinozaki Architects.

This house is for a family of three persons in the area of houses and fields spreading. Each life space is divided by the stone wall mined locally and by the radiated wall supporting big roof. Because the site is located at the end of a blind alley, it has atmosphere of comfortable deep-set. Barbecue in the Woods / Santiago Viale + Daniella Beviglia. Architects: Santiago Viale + Daniella Beviglia Location: Córdoba, Córdoba Province, Argentina Collaborators: Marcelo Beviglia, Edgar Ermoli, Margarita Cornejo, Clara Delfino. Damian Durando y Cecilia Gaisan Project Area: 95 sqm Project Year: 2007 Photographs: Lescano + Beviglia From the architect. This project comprises the design of a barbecue area, as an extension of an existing house in an area with a high density of native forestation to maintain. The program consisted of a covered and closed area with a small bathroom, incorporating an existing grill and clay oven.

iGNANT. In 2011 while still in graduate school for architecture, Samuel Ludwig spent 12 hours enjoying, studying, and occasionally photographing his professor Jose Oubrerie’s vacant masterpiece in Lexington, KY, the Miller House (1987-92). The house, which refuses to be reduced away and explained in a single sentence, is an example par excellence of one of the photographers current interests with buildings that refuse to be captured in a single, totalizing image.