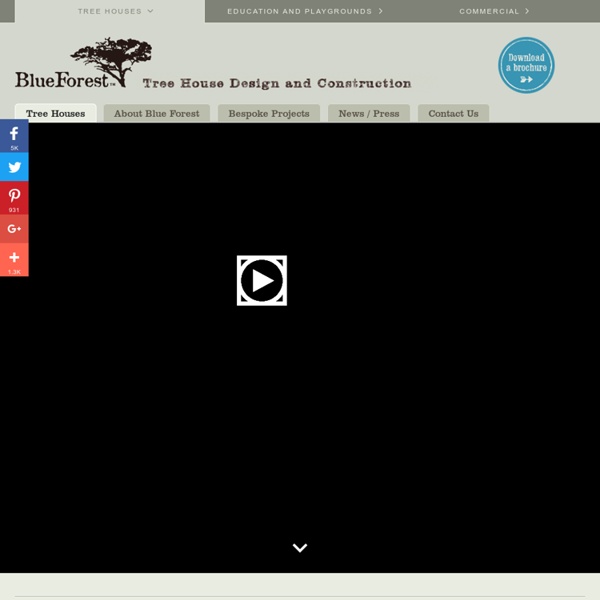 ecoPERCH Treehouse / Blue Forest ecoPERCH What does the ecoPERCH offer? 1.) Increase profitability with minimal disruption to your ongoing business (installed in approx. 5 days). 2.) 3.) 4.) The Concept: The ecoPERCH concept is based on Blue Forest’s famous tree houses. This versatile accommodation unit offers guests an unrivalled experience and provides clients with a vivid resource for PR and marketing, helping to set them apart from the competition. Click Here to Download the ecoPERCH Brochure. Contact us for more information… Plastic Bottle Homes and Greenhouses • Nifty Homestead Americans threw away 33 million tons of plastic in 2013, according to the EPA. How long does it take a plastic bottle to degrade in a landfill? Some say 500 years, some say 1,000. Plastic hasn’t been around long enough. We (in our lifetime) will never know how long today’s petroleum-based plastic bottles take to break down in the environment. Plastic Bottle Homes Around the World Eco-Tec’s Casa de la Fe. Casa de la Fe (Faith House) Honduran Foundation for the Rehabilitation and Integration of the Handicapped. Eco Tec’s Sky Field House under construction. How To Help? The best thing, of course, would be to stop using plastic water bottles completely. An Eco-Tec home in Bolivia. This home in Bolivia incorporates lots of wine bottles as well as PET bottles. Eco-Tec Africa – solving Nigeria’s housing shortage. Polli’s self interlocking plastic bricks are translucent thereby allowing the play of natural light to shine through. Photo credit: Xinhua/Martin Zabala. Water bottle wall.

studio aisslinger - Home Secluded Intown Treehouse Sur le site Airbnb, il est fréquent de trouver de magnifiques maisons intégrées dans les arbres. Définitivement l’une des plus romantiques, la Secluded Intown Treehouse est située à Atlanta. Les deux espaces habitables, à savoir la chambre et le salon, sont reliés par un pont qui, le soir venu, brille de milles feux grâce à des guirlandes subtilement suspendues. A découvrir. Incredible DIY Tree House - Living Big in a Tiny House | Living Big In A Tiny House Nestled in the trunks of a wonderful old Kauri Forest in New Zealand, this DIY Tree House is an absolute delight. The whole house is made from three small rooms (each under 9 square meters) that are all individually suspended in the trees. Although these tree houses are still under construction, the care and attention that is going into this build is evident and it is easy to imagine just how stunning they will be when completed. The builder of these tree houses has been chipping away at their construction in his spare time over the last few years. These tree houses were constructed over a period of 8 years as a DIY tree house building project. I'm a film-maker who is currently in the process of designing and building an off-the-grid Tiny House and filming the whole journey to help others who would like to do down the same path.

Earth Sheltered Homes • Nifty Homestead “Another type of building is emerging: one that actually heals the scars of its own construction. It conserves rainwater and fuel and it provides a habitat for creatures other than the human one. Maybe it will catch on, maybe it won’t. We’ll see.” – Malcolm Wells, 2002. The earth sheltered home uses the ground as an insulating blanket which effectively protects it from temperature extremes, wind, rain and extreme weather events. An earth sheltered home is energy-efficient, quiet, freeze-proof and low maintenance. Fifteen feet below ground, the soil maintains a fairly constant temperature equal to the annual average temperature of the area’s surface air. In the summer, that 55-degree soil will also keep your home much cooler than an above ground home. Here is a tour of an 1,900 square foot earth-sheltered home built by architect Alan Shope. The 2 Types of Earth Sheltered Homes Earth Sheltered: Dirt covers three exterior sides and the roof (the walls are most often concrete). 22) France

** Happiness Is...** I'm putting on a brave face today, posting this post. Eighteen months ago, I never thought I'd be writing about my fertility woes. But I chose to bring up this subject because I'm tired of keeping it to myself. It shouldn't be a secret. Our lives begin to end the day we become silent about things that matter. - Martin Luther King Jr. You may remember, back in January, I told you about our miscarriage from the previous year. A planning frenzy commenced. Sometimes I have to remind myself that it actually did happen. A certain darkness is needed to see the stars. - Osho It's not an easy thing to admit to yourself you have a problem. Earlier this week, we met with a fertility specialist to discuss our next move. Be gentle with yourself. – Max Ehrmann When I first learned of our challenges, I was angry, shocked and confused. But I wouldn't let myself stay there for long and neither would Hal. Some stories don’t have a clear beginning, middle and end. – Gilda Radner

Snowy Treehouse Tiny treehouse in Hungary, Börzsöny mountains. Build by Ferkó Gajdó. More info. here. Forget an In-Ground Swimming Pool, this Guy Built His Own Natural Swim Pond! Reddit user power-cube recently shared his backyard DIY project that he has been building in his free time over the last three years. Instead of installing an in-ground swimming pool, he decided to build a natural swim pond with a waterfall, small beach, fish (in one of the two ponds) and plants. Aside from the many man-hours he has put in himself, he figures he has spent about $30,000 on materials. In an extensive 88-picture album on Imgur he explains his build process and shares progress photos along the way. [via power-cube on reddit] A Few ‘After’ Shots The Build Excavation and laying a 200 x 50 heavy duty pool liner to minimize water loss due to seeping. 60 tons of sand was used 65 tons of river stones and pea gravel One pond for swimming, the other natural pond for fish, plants and wildlife visitors Building the waterfall Adding flagstone to each step of the waterfall Setting up water pumps In the main pond you can find bass, bluegill, catfish, and a few grass carps.

50+ Chicago musicians. 12+ New bands. Announcing : The Chicago Sonic Coalition. The idea is simple : Gather over 60 Chicago musicians, and put their name in a hat. Publicly draw at random to form over 17 new bands. Give those bands over two months to prepare a 15-20 minute set of new music, then bring those acts in front of a live audience. Throw them together to write and practice songs, push creativity, and get people out of their comfort zones. The idea supposedly started in Cleveland as a multi-week event under the name “Lottery League”. Musicians from almost every genre of Chicago's music scene, from noise, to folk, garage rock, and singer-songwriter's came together to form what we'd like to call the “Chicago Sonic Coalition”. What remains, well, you'll just have to see live for yourself. We stand strong as a community of musicians, artists, and creative thinkers. BLASTED (Members of Absolutely Not / Cinchel / Plastic Boner Band) Be there.